A few people have asked me for my hummus recipe, so I decided to commit it to the internet for posterity and here it is. I spent my teenage years in Qatar, in the Arabian Gulf and I LOVED hummus, or houmous as we called it. I practically lived on the stuff in my late teens and my absolute favourite King of Hummuses (Hummusae?) was available at the café at our local swimming pool club, called the Falcon Club. I asked the chef so many times for the recipe, but he never gave it to me; I think he thought I was kidding and it was some sort of teenage trick. So I experimented a bit and got as close as I could myself, and this is the result. Of course, hummus is a bit like lasagne or guacamole – everyone has their own version, their own tastes and, anyway, no hummus is as good as the one your mum makes…

I suppose the main difference for me with Gulf hummus is that it is a lot smoother than some other versions I’ve tasted. I was so happy when it came over to the mainstream UK shops in the early 90’s, but some of the early offerings were pretty disappointing and rather bland. I like my hummus lemony and garlicky and there is actually very little tahini and olive oil in the recipe. Some recipes call for huge amounts of these two things, but I don’t think it’s necessary, personally. I much prefer a bit of zestiness to complement that sesame seed warmth. Anyway, here it is, with my No.1 tip!

1 can chickpeas (personally I find the Turkish brands excellent, but whatever you can find)

1 clove garlic, chopped or crushed (as fresh as possible)

Okay, my no. 1 tip. When you take the chickpeas out of the can, DON’T throw away the liquid they come in. That is your secret weapon! Keep in a bowl, like this: 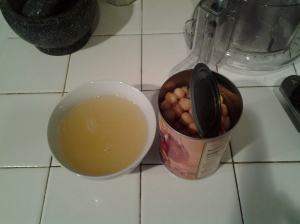 Then simply pop the chickpeas, garlic, tahini, lemon juice and salt in a food processor and whizz away:

Some people stop at this stage, but that is a mistake. You want to keep whizzing until it’s ultra-smooth, adding that liquid you saved from the can. That really gives it an extra bit of flavor. It reminds me of using a splash of pasta water in a sauce after you’ve cooked pasta. It makes a difference! Obviously keep tasting and adjust lemon, salt and other flavourings to your taste. People like to add a bit of cayenne, or coriander to the dish – it’s up to you. 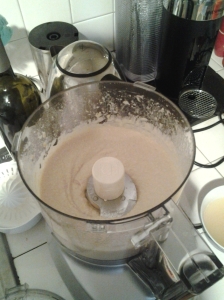 This is about how smooth I like it. I usually leave it to chill in the fridge for an hour or so, just to cool down and meld together. Then I eat it all. In one sitting, normally. Enjoy!