I made man pants! Man underwear! Man trunks! Whichever your linguistic preference (and I’m sorry American friends, but I will no doubt use “pants” a lot), that’s pretty fun. I asked my husband what he would like me to make him, thinking of a shirt, or jumper (sweater) and he replied that pants might be a good idea. I have been trying to hunt down menswear companies already (not a lot out there huh?) and had come across, and signed up to, Thread Theory’s lovely blog before. A local fabric shop was having a sale a few weeks ago and I spotted the Comox trunks printed pattern for sale and snapped it up. Done deal!

I have to say the making of these went quite well! This was due to good instructions, the fact that they’re not overly complicated and also the great Thread Theory Comox trunks sewalong I found. That helped a lot. I reckon I could knock up another pair in an hour and a half or so, which is good going for me. They appear to offer sewalongs for most of their patterns, which is marvellous, and don’t you just love their packaging/branding?  Disclaimer: my husband agreed to model the trunks for me, but if you are easily offended by pictures of men in pants, by grey pants in general, or if you are MY MUM (I know you read this sometimes) or just generally anyone who knows Tom, I left this picture until last. So just, you know, stop scrolling. It’s pretty non-offensive though, honestly. Ahem. Here are some other men in pants to prepare you:

Okay, to the sewing. I used a reasonably thick grey knit that was absolutely not what was recommended in terms of stretch. Thread Theory recommends around a 70% stretch factor; mine was nowhere near that. But I figured this is kind of a muslin anyway, so went ahead. So far, so good, but we’ll see what happens over the course of a day. Yes, I have warned my husband, haha. There are six pattern pieces overall and I guess I used around 0.75 yards of fabric. You pick the size according to waist and hip measurements, but my husband had an almost identical measurement for both, so I went with the waist. The hips didn’t end up being too tight, so I think that was fine.

The first thing to do was to make binding for the pouch bit. (Unattractive word “pouch” isn’t it?). That was just a matter of folding and pressing and then sewing them on along the sides of the pouch pieces. I used a mixture of narrow zigzag and normal zigzag stitch for all the sewing (tension turned down) and didn’t really run into any issues, apart from the waistband, but more on that later. 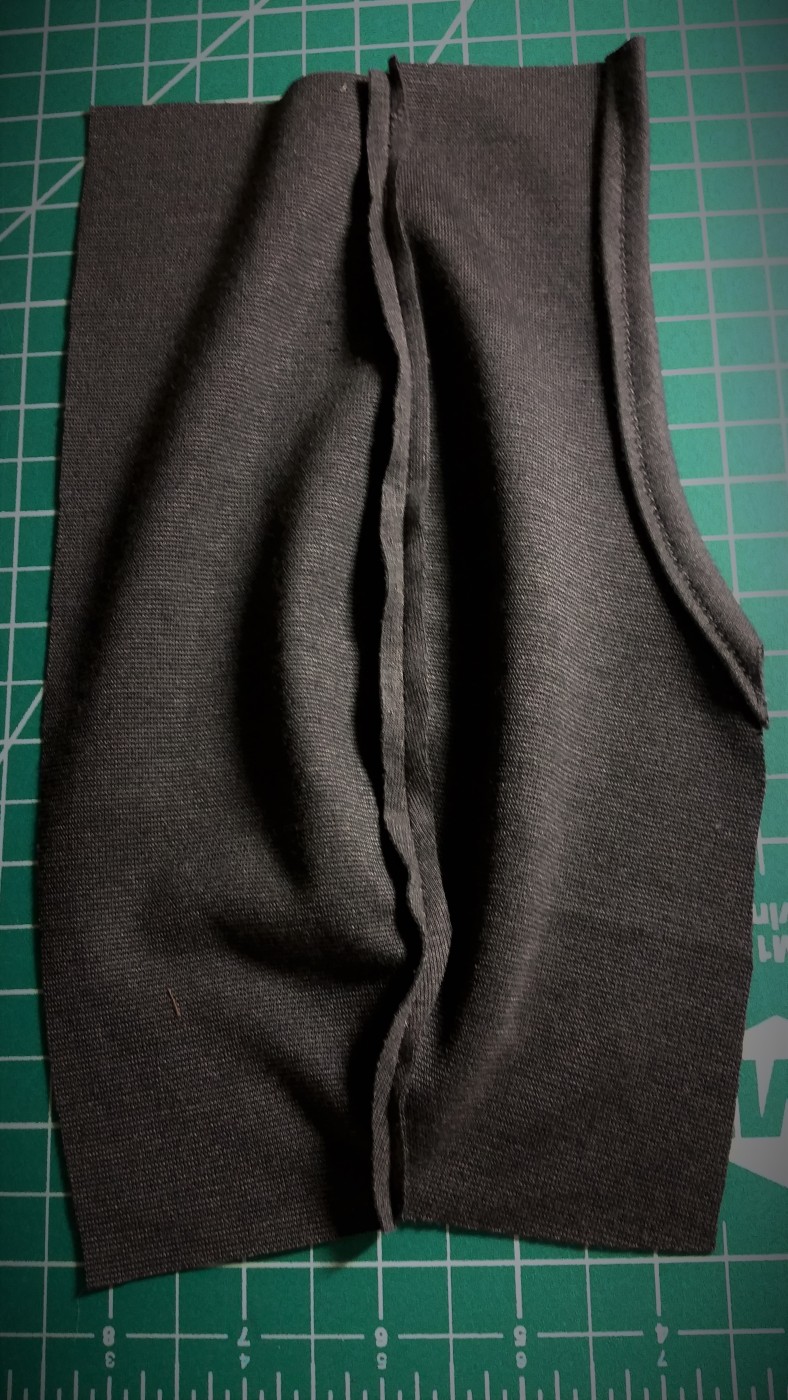 Then you added the pouch to the other front piece to make up a complete “front” half, before sewing the two together to complete the front. Thread Theory advised finishing the seams by simply pressing and trimming them down, which is exactly what I did. Of course, if you have a serger you’ll probably want to use that. And the sewalong provides photos and instructions for both serger and normal machine, which is great!!

The next stage involved sewing the back to the front to make the complete round and then adding the gusset. GUSSET! Who came up with these words?? The gusset is double thick for wear/protection in that, erm, area of things and I have to say I love the back of the trunks. I didn’t actually notice the shape until my husband popped them on, but it’s a really nice little design detail (below) to have that diagonal on the side. Sort of cups the buttock. And there’s nothing like a well-cupped buttock. 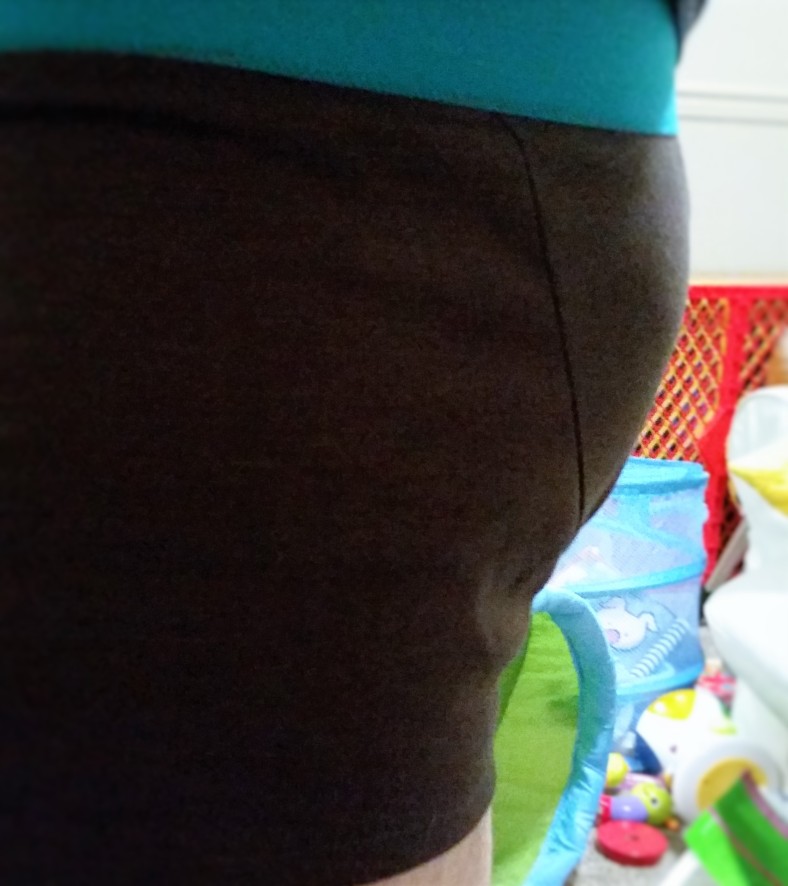 Then it was really just a case of hemming the trunks and adding the waistband. I used a single 5/8″ fold and zigzagged the hem and it came out pretty well. I took the advice of Thread Theory and made the stitch a bit wider and shorter for that part and it does indeed look quite neat. The waistband – I don’t know what happened. I think the narrow zigzag stitch I had was just too small for the trunk fabric and the elastic waistband together. I was slightly pulling on the elastic to ease in the fabric and the machine needle actually snapped!! That’s the first time that happened to me, but I got quite a surprise.

In a way, it was a blessing though, because when I pulled out the trunks I saw the stitching was all over the place and looked terrible. I unpicked it all and actually resewed it with a much fatter zigzag and in a slightly different way to that suggested. They recommended doing it “blind” from the fabric side, but I just didn’t trust my pinning skills on this slippery fabric, so I zigzagged on the elastic, knowing for sure I would be catching the fabric underneath. It worked much better! Unfortunately there are some ugly marks on the front of the waistband from the unpicking (you can see the holes behind the needle in the pic above), but, ah well. I’ll know for next time! 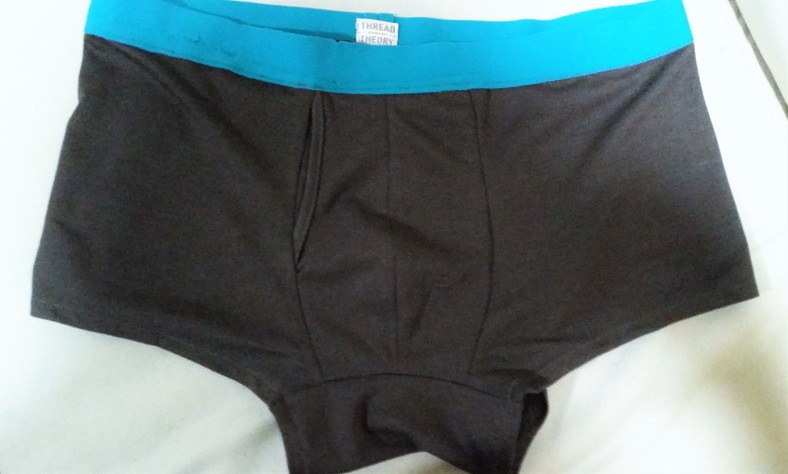 All in all, this is a solid pattern. The pants looked quite big when I had finished them, but they fit really well. I think you get used to seeing the RTW ones and the way they make them and then when you see a made-to-measure pair, they look… different. I will take the waist measurement down next time I make them as where my husband wears them is a bit lower (and narrower) than where I measured. I will probably also size down one size for the back piece as it’s very slightly loose. I’ll also plan to try a stretchier fabric to see the difference and maybe some more interesting colours/threads. Nevertheless, I was pretty chuffed with the first attempt and now my husband is totally excited he might never have to go underwear shopping again! Yeah, right. 🙂 The pattern is good, the instructions/sewalong are great and there are loads of options offered for different parts like the waistband or hem – if you have someone to make pants for, go for it! Oh, and here they are on (I think the baby’s toys in the background are a nice touch):