A new bag! It’s a present for someone, but I’ve sent it already, so this won’t spoil any surprise. I’m pretty sure they don’t read this blog anyway. 🙂 You may recognise this fabric. It’s the Nani Iro brushed cotton that I made my Beatrix top with. In fact, I decided to make this bag first and then used the “remainder” for the Beatrix top, which seems a funny way round, but there you are. The bag recipient loves red and I happened to know she just bought a new grey jacket, so it was  a fairly easy colour-combo decision. I added a pop of bright blue inside for a wee surprise. 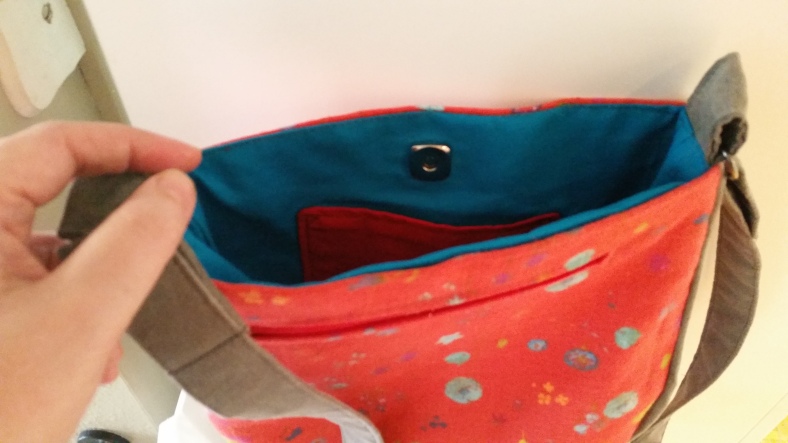 This is the Noodlehead Trail Tote bag and is another amazing free design from Anna Graham of Noodlehead. I was asked if I could make a bag a bit like the one I made before, but with a pocket on front. And this is the one I found! The construction was fairly similar to the gatherer crossbody bag, but there were fewer “pieces” as there was no fleece interlining or flap. I forgot to take a picture of me standing with the bag, so here is the pattern picture to give you an idea. I made the smaller of the two bags. 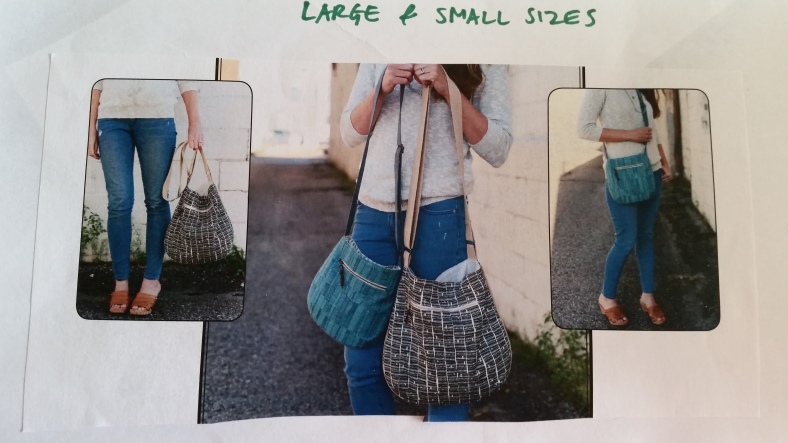 I chose a suedey material for the strap and piping and it worked out rather well, giving quite a luxurious feel, I must say. Having said that, my piping was the only part of this bag I wasn’t too happy with. I made my own, as suggested in the instructions, but I made it a bit loose I think and it’s not very even in the final bag. I resewed some parts, but I hope she doesn’t look at it too closely! 🙂

The main “new” technique to this was adding a zipped pocket. My first zip!! Woohoo! It was pretty straightforward once I’d read the instructions a couple of times. Like most things in sewing, it seems to me so far, the method is not completely intuitive. Or perhaps it’s just my way of thinking, but the putting things in backwards and turning upside down, etc. doesn’t come naturally. I have to work it through my brain for a while! The pictures below show making the zipped pocket before it’s folded into an actual pocket and the cut-out for the zip after it’s been marked and stitched. The topstitching around the final zip isn’t my best work ever, but I’ll take it.

Then it was really just a case of sewing the two exterior and two lining pieces all together and attaching the strap. The pattern calls for an adjustable ring, but I had a little bit of a hard time finding that, so I just used normal rings and made the length fixed. I do find bags are one of those things where I think I have everything and then I realise a piece of hardware is 1″, not 1.5″ and, unfortunately,  you can’t really just “make do”. I’m getting a little bit of a collection now!

Anyway, I must say that after making a handful of bags now, I do rather like the construction process. It’s one of those things that looks a total mess and then you turn it all inside out at the end and it’s like Lalalaaaaaa!! All the ugly bits are hidden. It appeals to my sense of drama, haha. I’m totally keen on making the larger version now as I think it’ll be a really practical size for all my daily detrius. I’ll probably go for a bright canvas and perhaps a leather strap.

That’s it for now. Talk to you soon!

My Seattle sewing buddy Claire @cm.sews and her friend Claire @the_stitch_bandit - yes, three Claires for the price of one - came up with a great idea for reposting old projects that either never saw the light of day or that are something you want to revisit. The hashtag is #mysewinghistory and I love the concept. You can read all about it over on their feed and check out some posts.
I lost my whole blog post on this DP 004 batwing top Friday night right before I published it and there's nothing more $%&^%$# than that.
1/2 I have a lot to say about this latest project, so let's start with this pic! It's Le 004 from DP Studio and it's the first of their patterns I've completed 100%. I have quite a few of them but haven't had much joy with so far: the first was a dud for me (I will post it soon as I note I haven't put it on Instagram yet) and I lost steam with the other; I occasionally take it out, look at it for a while and then put it away for another day, gently sighing.
Outfit in the wild! It almost felt like normality today, going to a real life art exhibition. This is my @namedclothing #reetadress and @atelier_to_naniiro_textile linen coat at the current Monet at Étretat exhibition at @seattleartmuseum. Small but perfectly formed, the wow factor when seeing the main paintings was high. Photos obviously don't do them justice, but Monet really was a fully technicolour bearded behemoth of the 19th century. So beautiful and absolutely worth a look if you're in the area.
Blog post up now on my #seamworklarkin bomber with a little tutorial on exposed zipper pockets and the ruffle I added. Here are a few pics of the details, including that lovely bemberg rayon lining, which makes wearing it feel so dreamy.
The new Seamwork patterns are out and this is the Larkin bomber jacket, which is designed as a gender-inclusive pattern. Very cool. I decided to lumber it up with some plaid wool from the stash, but added a fun ruffle to the front as well as exposed zipper pockets instead of the welt pockets as designed. I like a welt pocket with the best of them, but I've done a few recently so felt it was time for a change.
Loading Comments...
%d bloggers like this: