When I was younger, I had this two piece outfit from French Connection that my Mum persuaded me to buy (being 13 or so, I had other ideas). It was a lemon and mint striped cotton top and skirt/culottes outfit that was a lot nicer than it sounds in writing. I still rather like the look of matching tops and bottom outfits and I’ve been thinking about making one for a while. As well as the whole outfit for a more put-together occasion, you’ve also got the option to wear them separately – three outfits in one really! I had been, and am still planning, some sort of cotton circle skirt and vest top affair, but in the meantime, I’ve made up this outfit in a knit. And can I just say…. DRUM ROLL… this is my first Big Four pattern!! Woohoo!

Okay, okay, so it comes under Butterick “Very Easy”, but hey – everyone has to start somewhere right? I had this super soft rayon jersey from a sale a little while back and I knew that because of the busy print I wanted to make something fairly simple pattern-wise. Originally I was thinking more along the lines of a wrap dress but then I saw this pattern and thought, “Hmmm”. Seemed like a good chance to try a few things: making a t-shirt, working with another knit, trying a Big Four pattern and it also seemed fairly forgiving. So off I went! 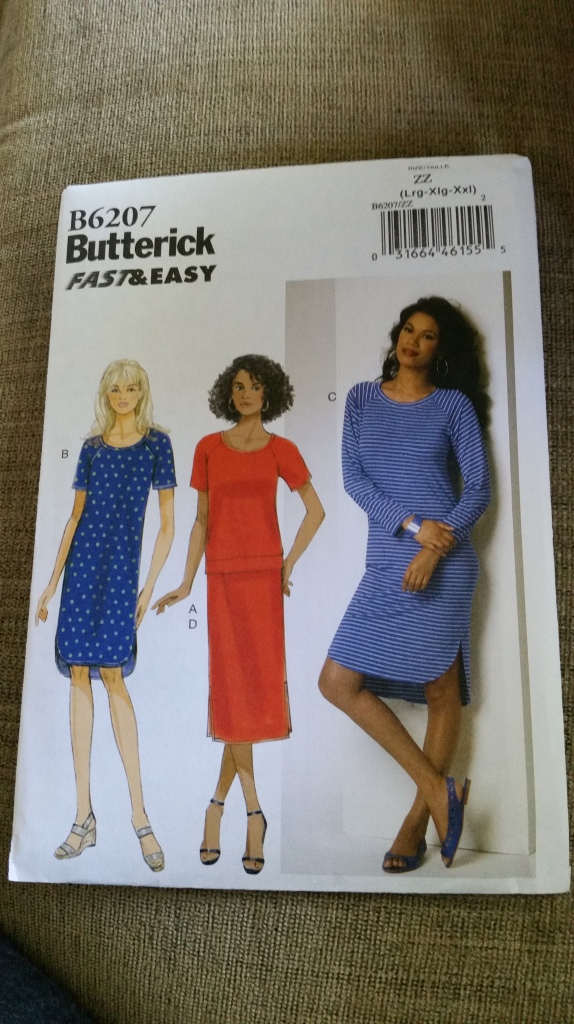 I cut a size L (View A + D above) and you can see that this is not a super tight-fitting t-shirt, which is exactly what I wanted for this outfit. There is quite a bit of room in the sleeves, and I don’t have skinny arms, so others may prefer to take some width out. I also like the wide band at the bottom of the t-shirt. I was a little dubious about the skirt, since I haven’t worn a fitted knit skirt since my twenties, but actually it also had a fair amount of ease and feels very comfortable. The aforementioned band also gives a little room and avoids (mostly) Pot-belly Syndrome (that’s not really a syndrome, I just made it up) for the less flat-stomached of us. I might add that the pattern says the garments are “close-fitting”. I suppose they are relative to wovens, but not what I would think of as body-skimming.

Sitting down with ease (see what I did there?) Ha.

So – construction! Well, I couldn’t wait to get my teeth into the all-too-famous brief instructions that accompany a Big Four pattern, but I have to say I found it fairly straightforward. It is a “super-easy” pattern after all :). The raglan sleeve style of the t-shirt made the sleeves a non-issue. Anything I wasn’t too sure about (the double seam for example) was nicely explained in the notes. I only had two issues with the entire make: 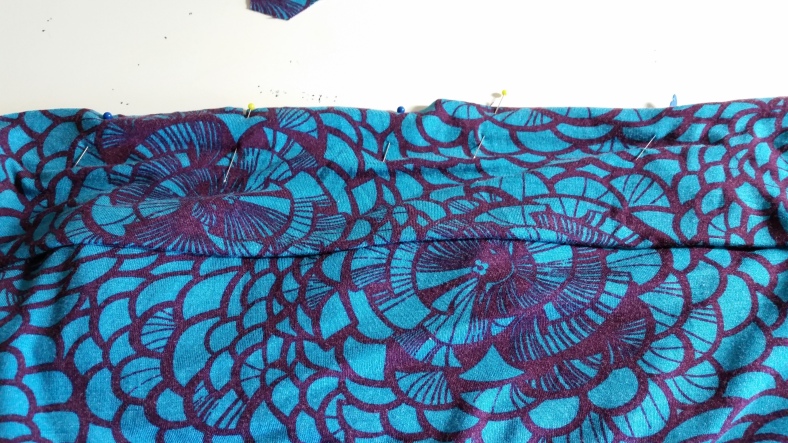 A) The material. This is a slinky rayon knit and it feels lovely and cool on the skin. Of course, Pinkwhistle’s 3rd law of sewing means that this necessitates it must be a bugger to sew with. (I made that up too). Marking it was the worst! I knew immediately I could forget about cutting it on the fold and instead cut everything in a single layer. My cutting mat simply isn’t big enough to use a rotary cutter for the whole pattern, so I needed to mark out the larger pieces. Boo. I tried a chalk wheel (impossibly draggy), a disappearing ink pen that sank into the knit and disappeared immediately and a wheel and tracing paper (couldn’t see the carbon). I suppose good ol’ tailor’s chalk might have worked, but I didn’t have any. I ended up using a regular pen and just drew lightly. Sewing the material wasn’t too bad. I played around with the stitches and ended up using the 3-point zigzag stitch. It was sometimes a little tough to get going at the beginning of smaller pieces, but I worked it out in the end. 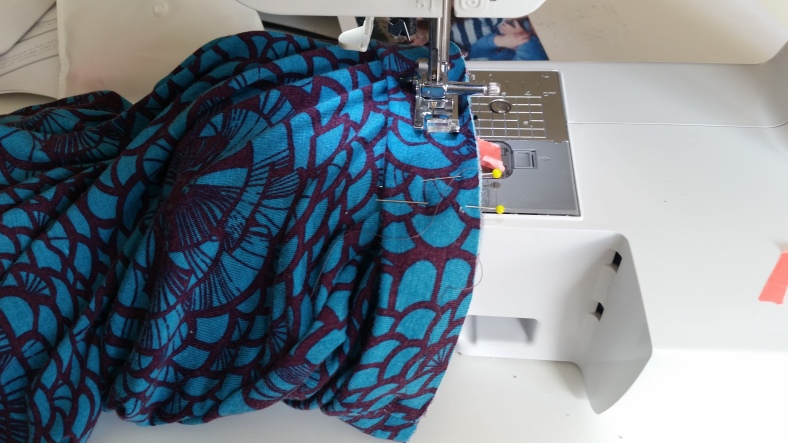 B: The double seam finish. For the most part, the double seam finish works quite well. I used the zigzag along the seam allowance, and then a straight stitch 1/4-in into the seam allowance. The instructions advised you to trim the seam allowance at the second straight stitch line. This was mostly fine apart from on the neckline. It flips around and sticks out a bit here – enough to be annoying. After consulting someone much more experienced than I, I think I’m going to try and trim it further and then maybe topstitch it down. Let’s see if that helps, but I don’t think I would use this neckline finishing style again.

I must say that this knit pressed very well, so hemming and so on was relatively painless. I also tried to bear the pattern in mind, particularly in the boob area, although I think it’s random enough that it doesn’t matter too much. At least I hope so. 🙂 Since I made this, I’ve been at a class where we’re working on a knit project using a walking foot and much smaller zigzag stitch. I actually got a walking foot with my machine, so I think I will try it out for my next knit garment. In terms of the pattern, it’s a really quick sew – it took me maybe 4-5hrs including pattern tracing and cutting. For me, that’s pretty quick. I also like the View C dress  – and now I know that there’s quite a bit of ease in the pattern, I may whip one up in a slightly thicker knit. 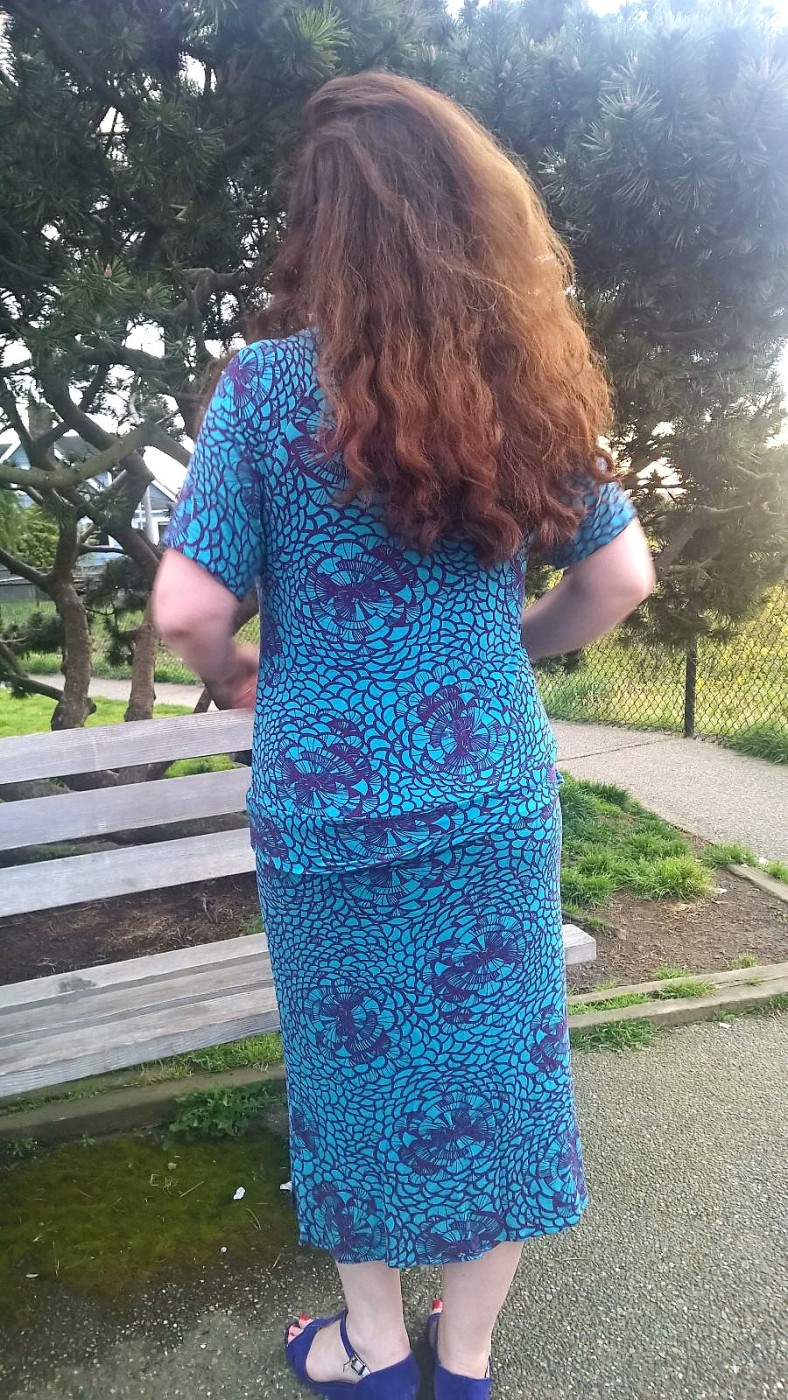 The hem on the top is straight – honest! My t-shirt got a bit rumpled here.

I totally think this is a great beginner’s knit pattern and also a first Big Four pattern. 😉 Can cross that off me list now! Okay, that about sums this up, so hope it’s useful and cheerio for now…

PS. I popped over to the Craftsy site just now to check the content of my knit and they have 50-60% off a lot of Cotton & Steel fabric at the moment. Just sayin’! 🙂