I don’t mean that in a “Lawks, what have I done to him??” kind of a way, more in a “What have I actually done“, as in sewn, way. I wrote my first blog post 6 months ago and time has gone FAST. I thought it might be a good idea to take stock of what I’ve achieved so far in the world of sewing as it will no doubt point me in a few specific directions going forwards. Therefore, this post will probably be of interest mainly to… well, ME, but hey, feel free to peruse my summing uppery. 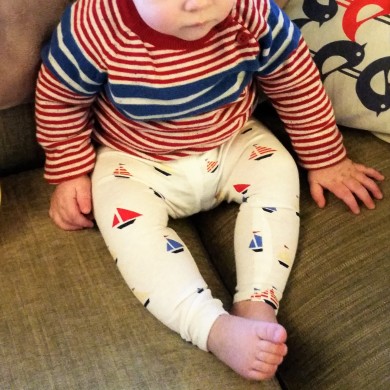 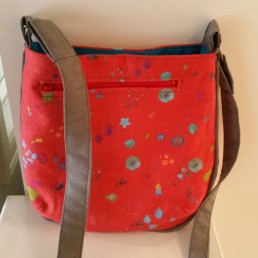 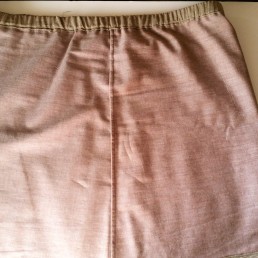 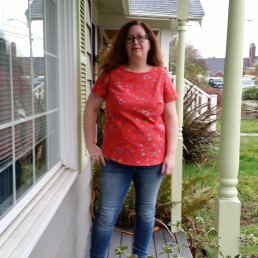 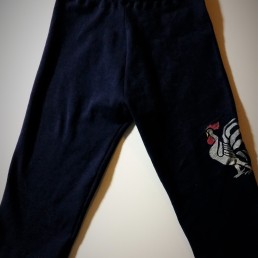 The little guy sporting the dungarees and a handsome bruise. He just started crawling…

Well, this is interesting for me already. I feel like I’ve sewn quite a few women’s garments, but actually, I’ve sewn: 4 baby’s garments, 1 men’s garment, 8 bags/accessories and only 7 women’s garments! One of those doesn’t really count (the fawn inside-out skirt at the end of Row 2) because it was a simple little skirt to try out French seams and is wayyyy too small. So that’s pretty much one per month on average. I’ve also added the crocheted items, which is questionable – but they are garments, so I thought I should in the end. It definitely seems like I’ve made more, but then, to be fair, I have a couple of items I’m finishing and haven’t blogged (Fancy Tiger Crafts’ Sailor Top and Fen dress, Grainline’s Linden sweater) and I do have a couple of items I’ve started and put aside for various reasons (wrap skirt, Named Inari dress). I also spend a lot of time just thinking about what I’d like to make, so that probably adds to the feeling. Don’t we all?

I’ve taken 2 real-life courses: one I’ve blogged about at Made Sewing studio here in Seattle, and one I haven’t, which was a 3 part course at Drygoods Design. This is where I have been making some of the garments mentioned above, so I will mention the course in those posts. I also subscribed to the online League of Adventurous Dressmakers course, which I’m enjoying very much. Since my post, we’ve covered gathering and pleats, and have moved onto fit, which will last a few months. I also signed up to a simple Burda intro to patternmaking course, but found that I felt a little too inexperienced for this. Even though it was just an intro, I didn’t feel familiar enough with patterns themselves to discuss how to adapt them. I’ll come back to it though. Besides these, I have done a WHOLE lot of reading and internet browsing, through which you definitely pick up all sorts of tips and ideas – and really just get a better picture in your head of what it’s all about.

I’ve tried to learn something new each time with the sewing I’ve managed to do (which wasn’t too challenging when starting from zero) and I’ve done quite a few bits and pieces:

I’m really quite satisfied with that little lot. What I do need to do is to consolidate some of these things by a) making some copies of my favourite garments and b) practicing them some more on scraps

What for the next six months?

I have some fairly clear goals that I’d like to build towards in the next six months. I have absolutely been dabbling here and there and all over the shop so far – not necessarily making things I would choose in a RTW shop, but because they were part of a lesson, or taught me a skill. That is absolutely fine , but I’d like to try and work towards:

As you can see, none of these goals are super-specific, but more of a general direction I’d like to take, much of it building on what I’ve learnt these last six months. You never know how much you’re really going to enjoy something new when you start it, but I can definitely confirm that I’ve greatly enjoyed this foray into sewing – and I’m looking forward to the next six months!

For my second Monarch jacket I sized up one size to an 18 because I wanted a little more ease for an outerwear feel. This final version of the extended size has bust darts, which makes for lovely subtle shaping.
The @allieolson.patterns Monarch jacket is now available in extended sizing with a D cup draft. Woohoo! I tested it last autumn and I have been wearing this top non-stop since then.
It's March! Finalllyyyyy! And it's time for new patterns from @seamwork. I made the new Benning dress in a gorgeous rayon linen blend and it's love!
Last hands-on class today at #sewexpo2021 was this Sew a Fat Quarter Container lesson with Clearview Designs, who I just noticed are based out of Snohomish. I love Snohomish!
Today's main class was a wonderful lesson making bound buttonholes with @islander_sewing_systems. It was very clear and precise and I learnt a lot.
This morning's class at #sewexpo2021 was an Embroidery Pin with @mcreativej. We did a desert scene and it was really fun! I am no hand sewist but I totally get the appeal and it really didn't take too long.
Loading Comments...
Comment
×
%d bloggers like this: