Not exactly the most succinct of book titles, eh? And I’m not sure the “From Stitch to Style” subtitle really tells you anything very much, but at least the first part tells you from whence the book originates. I haven’t really written a book review for this blog before, although I may start, since I have such a multitude, but I wanted to jump in on this one right away, because – it’s ACE. I picked it up on a whim really, from WH Smith (I can’t think of a similar US store, but it’s basically a bit bookstore/bit newsagent/bit stationery shop) for about £8 and I see it’s the same on amazon.co.uk. This is a STEAL! Honestly. 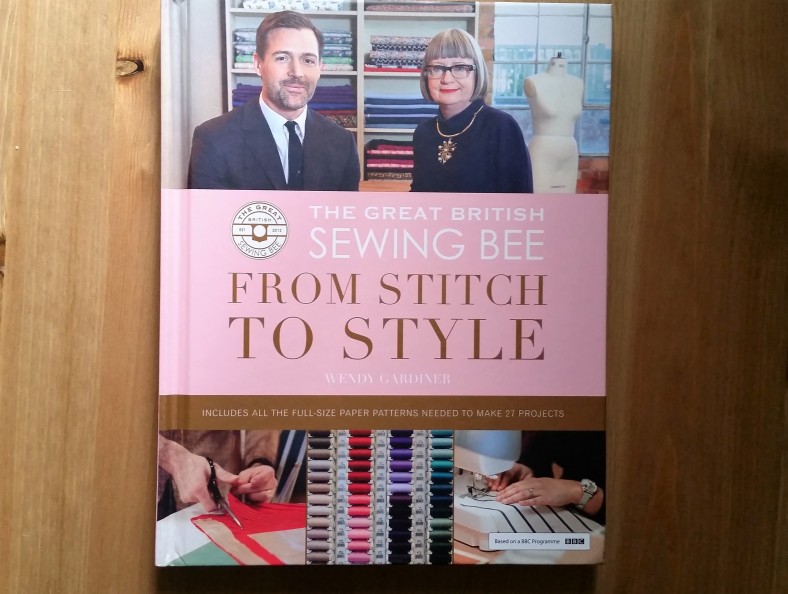 Now, I have to tell you that I was pretty disappointed with the one previous Sewing Bee-related book I invested in. That was May Martin’s Sewing Bible and the disappointment arose when I realised the patterns for the projects featured in the book weren’t included. That is – you had to buy them separately, on top. And we’re talking Big 4 type patterns here. I’m sure May is a very nice lady, but it did feel a little misleading and I can see from the comments on Amazon I’m not the only one who felt a little let down. So I really wasn’t expecting too much from the latest tome associated with TGBSB, much as I love the programme.

I’m pleased to say that, on the contrary, this book is chock-a-block full with helpful tips, sewing guides and decent patterns, with good styling. Yes, I know I’m supposed to look at the line drawings and forget the styling, but… what can I say? I’m weak. And inexperienced. Good styling helps me. Really, it does.

It’s put together by Wendy Gardiner, hugely experienced garment sewist, and it shows.There are nice sections on different skills, like the handsewing techniques, above… 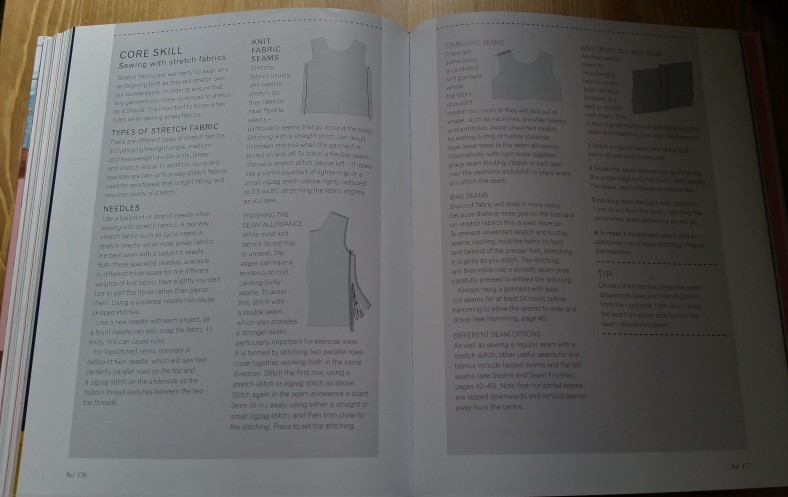 There are also sections at the end of each project which deal with a particular skill associated with the project – these are called “Core Skills” sections. These include skills like working with bias cut garments, dealing with facings and sewing with stretch fabrics. They’re all nice and concise, and seem well-written from what I’ve seen so far.

Anyway, on to the actual heart of the book – the patterns. There are patterns included to make 27 different projects (which includes hacks I think, but they are actually good, useful hacks) and they are provided in UK size 8-20, which is a decent range. This equates to a US 12-24, (or 10-22 depending on how you convert – I’ve seen both) or, perhaps more usefully, bust size 32.5-in to 45.5-in and waist 25.5-in to 38.5-in. The patterns come in a completely separate little case and are overlapped, but differentiated by colour.

And finally – to the designs themselves! I have to tell you that in books like these, I normally like one or two patterns and even then, already have something similar in my pattern collection already. I’m pleased to say I actually like a lot of these patterns – and some of them really a lot! They are almost all womenswear, but there is a cool babygrow and some other kids clothes, as well as a really nice men’s pintuck shirt (quite hipster admittedly) and even a men’s cycling top. Can’t say I’ve ever seen one of those before! I’ve put a couple of pictures of some of the designs I like below, but I’m being extra careful in case you really, really want to avoid any chance of spoilers. Now, the book has been on sale for a while, so I don’t think there are really any spoilers per se, but a couple of the patterns have already been in the series challenges. I have no idea if the pics I’ve chosen will also be featured, but you have been warned! 🙂 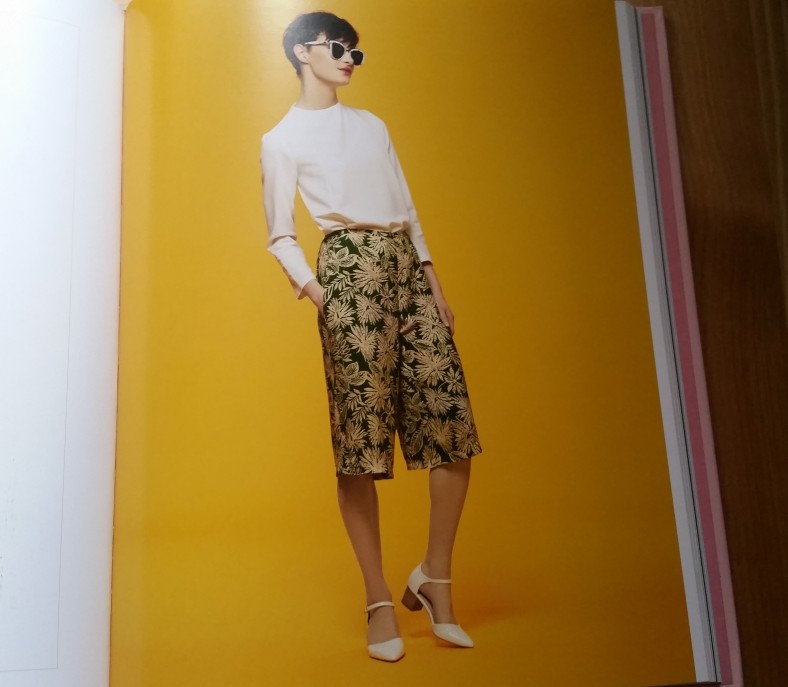 First up, I chose these culottes, which are actually a pattern hack of some decent-looking palazzo pants. Culottes are very of-the-minute it seems to me, with a fair few pairs making their way onto blogs recently (and I am planning some too) and these look like a nice version. Good length, quite sleek – and you see what I mean about the styling? Obviously it’s a matter of personal taste, but books like this often feature apparel examples that lean more towards frump than fashion, in my (admittedly biased) opinion. 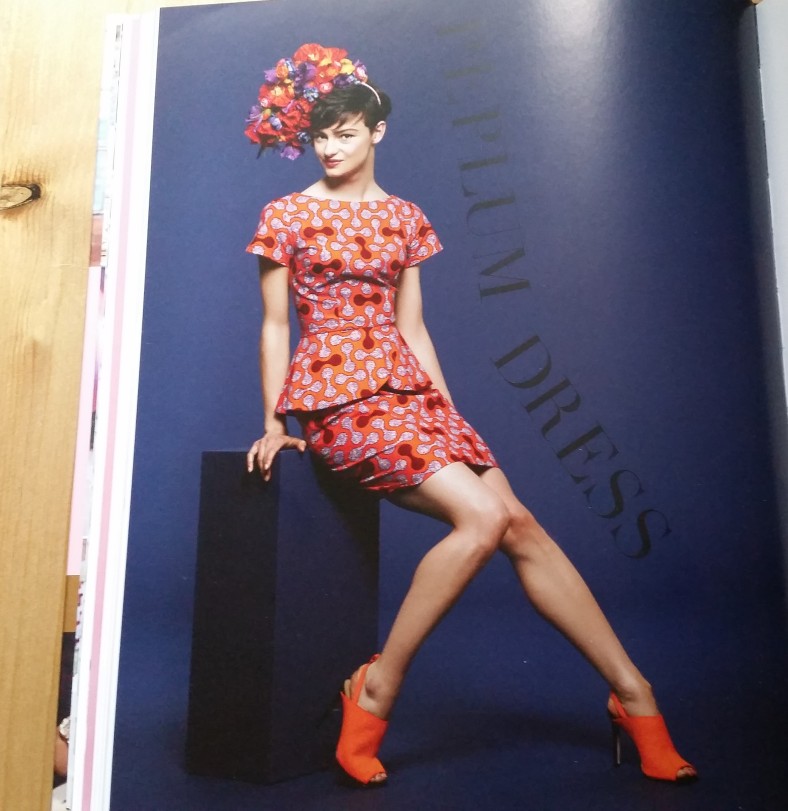 The other example I chose was this wax cotton peplum dress. Firstly I really do like the fabric choice, but I also thought this was a really quality design. You can’t really see it here, but there are little petal sleeves on the arms and there really is some nice shaping around the waist. Peplum garments have actually never been something that particularly called to me, but this is cool – even if it ended up being for someone else. Overall, the projects really are very varied and run the gamut of garments, from underwear to nightwear to evening wear.

Well, that about wraps this little review up. Obviously, there is a big disclaimer here in that I haven’t actually made anything from the book yet, although I plan to very soon. I just wanted to give a heads-up to anyone who, like me, almost bypassed this book thinking it would be the usual TV-to-book guff that sadly often accompanies your favourite TV show. For £8, I would definitely say this is a worthwhile addition to any sewist’s library!

6 thoughts on “The Great British Sewing Bee: From Stitch to Style review”