Two items crossed off the old A/W list. One totally successful and one partially, but to be improved upon. First, let me mention the McCall’s M6966 maxi skirt. I threw out my last long black maxi a few months ago and the reason I did was because it had too many holes in it. This gives you a good idea how much I wore it and why I need another. Okay, it doesn’t win any awards for being inspiring, fashion forward or even… cheery. But a skirt like this is all-weather-suitable, can hide any number of sins and goes with (almost) everything. Like all of those perennial favourites though, it’s amazing how hard it is to find a good, simple RTW black skirt (or white shirt, plain black cardigan, etc, etc.) 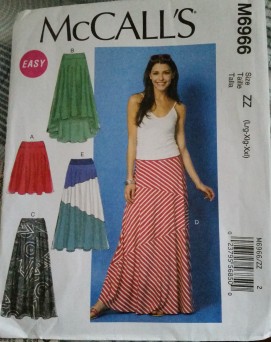 I decided to use M6966, which has been lurking in my pattern collection. It actually offers quite a number of variations, most of which are more intricate and offer up interesting pattern combining possibilities. But, honestly, I just wanted a… plain black skirt with a plain black waistband. The end. So I went for View C and didn’t even indulge in the frivolous gathered yoke, but made the basic one instead. 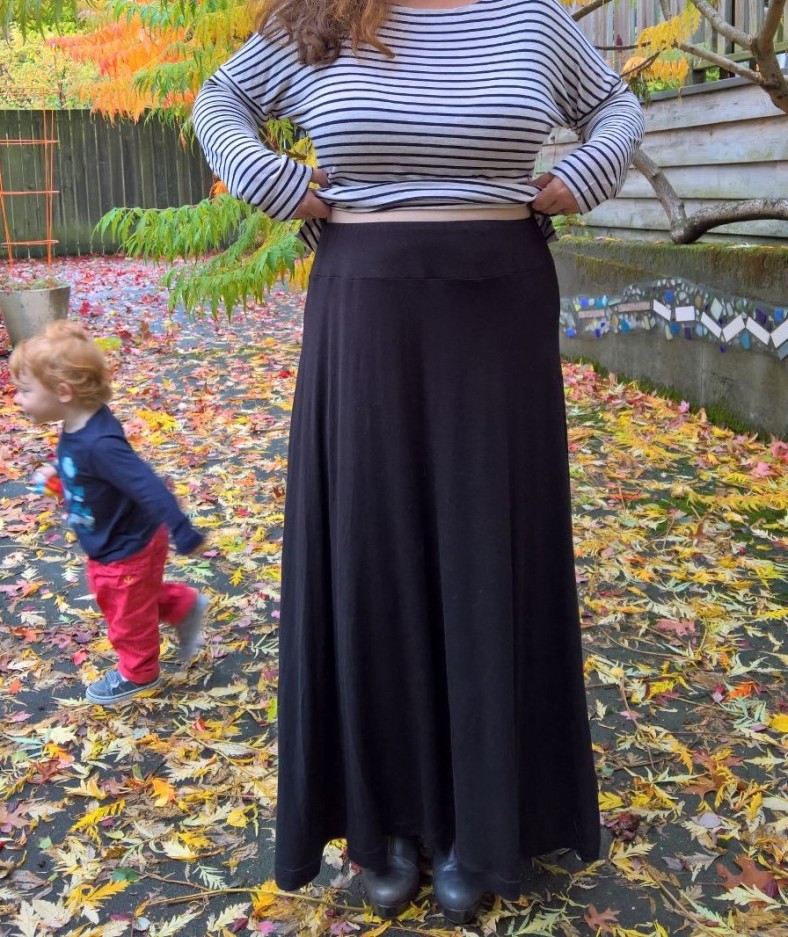 I don’t have too much to say on this skirt apart from the basic details and a couple of notes on sizing. According to the packet I was an XL, but on reading other people’s experiences, I cut a size L and it’s very comfy. I suspect most people should size down at least one size, since I think I could get away with a M for sure. I used a drapey black rayon knit that was sitting in my stash just waiting for a maxi skirt to hunt it down. I used the serger throughout and simply sewed the front to the back (only two pieces) before attaching the yoke. The yoke was made a little differently from what I’ve done before: you basically make two of them (four pieces) and stitch them together, but leave a space in one of them (designated the facing) to channel the elastic through. In the end you produce a yoke the thickness of four pieces of fabric, which is exactly what you need in a maxi, in my opinion: a solid-feeling waistband. The elastic is only 1/2″ and is absolutely fine, but I might consider increasing the width another time. 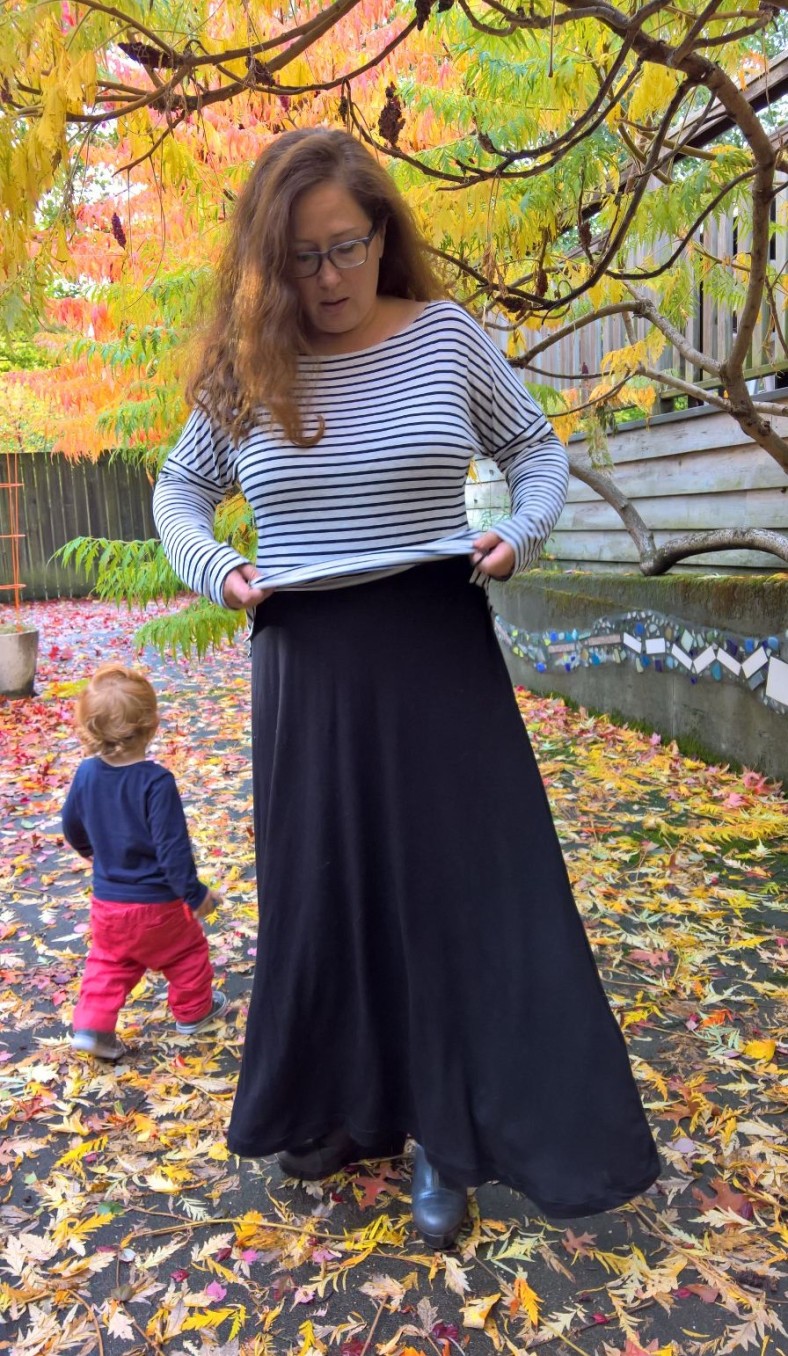 Apart from that, just watch the length. It’s supposed to be finished with a 5/8″ narrow hem, but I needed to take it up 3.5″ in total. I’m just over 5’6″ so not tiny, but I’d read the pattern ran long on Pattern Review, and I would definitely agree. I find marking massive hemlines kind of tedious, so I quickly stitched a 2″ line round the bottom and trimmed it off at that stitchline. This left me with 1.5″ to play with, so I folded a double hem of 0.5″ plus 1″ and then used a twin needle to hem all the way round. I can already tell I’ll be using this a lot.

Alright, onto the Great British Sewing Bee Breton top. I had earmarked the Liesl & Co. Maritime Top for this make, but then I remembered both the GBSB pattern and my #sewingdares dare from Gillian at Crafting a Rainbow. Apart from making some super nice clothes and writing a great blog, Gillian also came up with a dares activity where she looks through your blog and gives you a sewing challenge. It’s laidback and fun, and my dare was to make something from the GBSB book. So now I have! 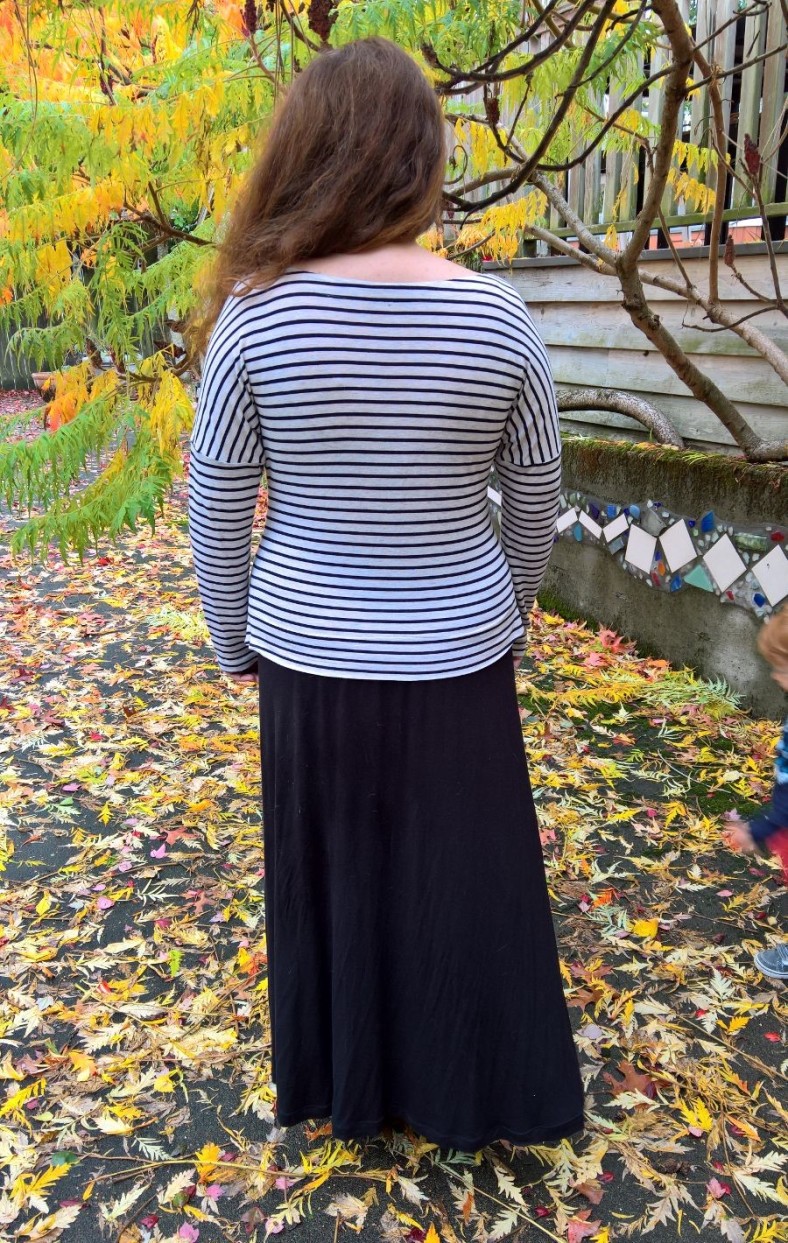 I used 1.5 yds of an extremely soft knit that I bought at District Fabrics here in Seattle. I guess it’s a rayon blend maybe? I tried to find the details on the website, but no joy. Either way, it feels like kittens’ breath on my skin. (Without the tuna aroma to go with it). Ahem. Okay, first thing to say: I cut too big a size. I cut a 16 and the result is way too big for me at the shoulder area. There is quite a bit of ease built in through the bust and waist, but the shoulders are just too wide for me. In addition the facing is wide and this, combined with my drapey knit, resulted in my shoulders being a good few inches lower than they should have been. Want evidence? Behold: 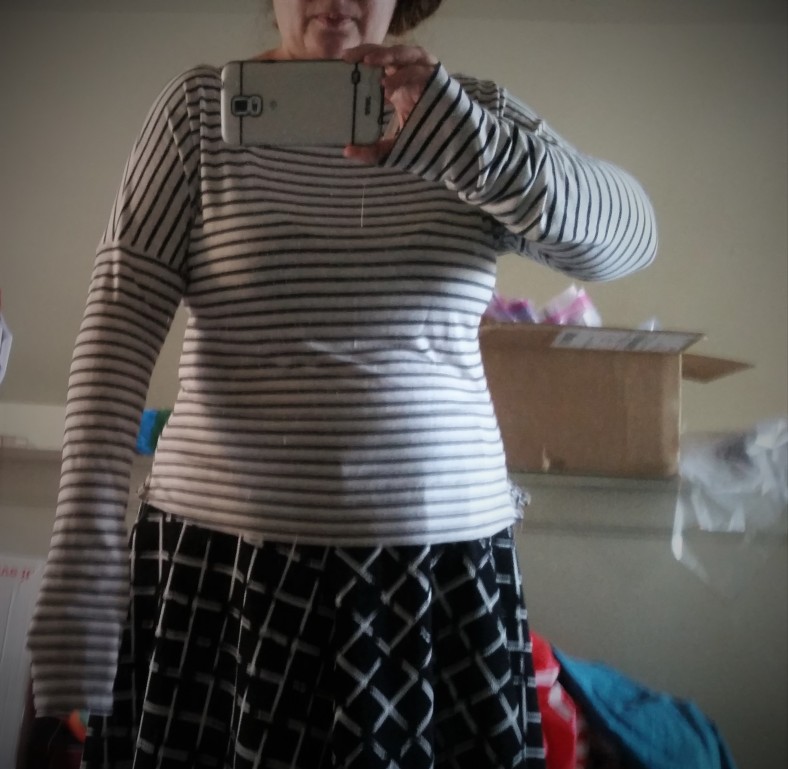 Funnily enough the length and fit on the waist and hips was fine, so next time I would work on the facing first separately as I think that would go a long way to rectifying any issues. In the end this time, as it was pretty much a wearable muslin (I didn’t see the point in a muslin-muslin given the fabric difference) I fixed it by simply chopping the arms 4 inches. Yep, 4 inches. The result is slightly more mini-batwing than Breton (see a couple of pics up), but I like batwings, so it’s all A-OK. 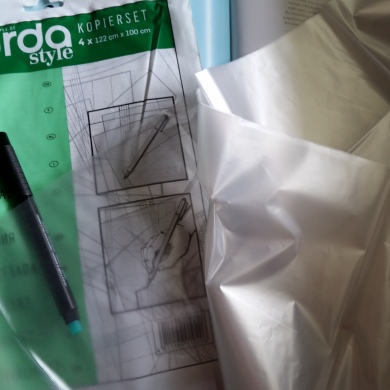 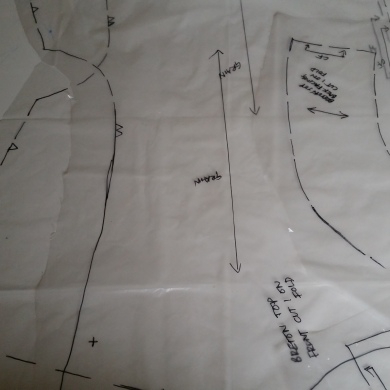 I did notice on tracing the pattern that the back and front facings are almost exactly the same shape, which I thought was a little unusual. After I finished this top, I compared them to the pieces for the Liesl & Co. Maritime Top and they are quite different. The Maritime Top is very similar to this version, so I think I might try that one to compare both the method and fit and see what happens. Speaking of tracing, I found this Burda “tracing paper” in my cupboard that I bought ages ago in Germany and was surprised to discover it is actually transparent plastic!

I found it quite slippery to work with…BUT an extremely nice use of it became apparent when I was trying to match the stripes on the fabric. Oh yes – that is much easier to do when your pattern pieces are see-through! Yay!

Construction-wise, the instructions are good. There are decent diagrams and quite a bit of text, so it’s pretty easy to follow. The first steps were stabilising the shoulders with tape and staystitching, before sewing the front and back together. Interestingly, you were only directed to staystitch the front piece, which I thought was unusual. Then the two facing pieces are stitched together and onto the main body, RST.

Once the facing is on, you’re asked to understitch it so it doesn’t roll over (very important), flip and stitch down the facing on the inside, and then trim. I have now decided to invest in some decent clipping scissors as, even though I was being careful, I managed to snip a little hole in the back of the top. 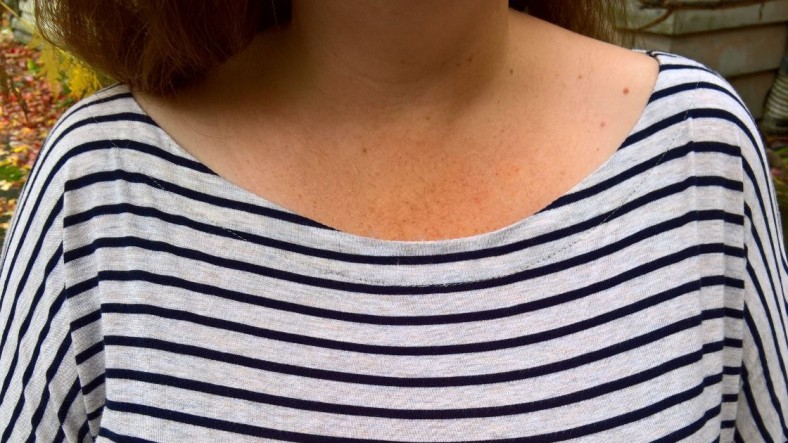 Argh!! I fixed it with some interfacing and few small stitches, but that was well annoying. It’s sewn quite deeply, at around an inch or so, but it’s quite a nice finish I think. 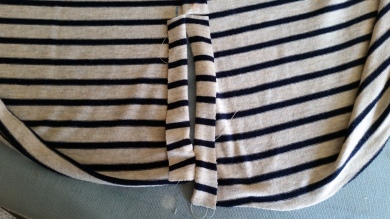 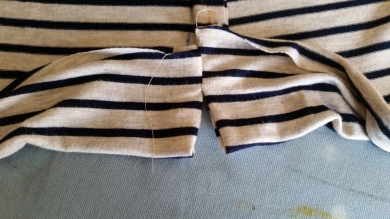 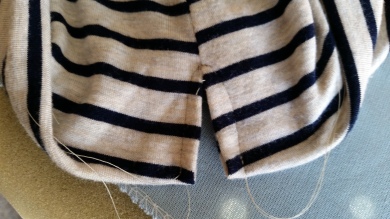 The sleeves are sewn on flat and then almost the whole side seam is sewn. The method for making the little vents was new to me and I rather liked it, so I took a couple of pics; I hope you can see them ok. When you sew the side seams you leave a gap between two notches set at the bottom of the top. Pic 1 shows the top laid flat, wrong side up, and you can see the gap created in the side seam. What you do then is to fold the top up on itself, shown in Pic 2. You can this is already creating the “v-shaped” vent underneath. Once you have it where you’d like it, pin it, as in Pic 3 and then finish by stitching around the vent as per Pic 4. I must say it actually worked rather well!

The last thing to do was to hem the sleeves and bottom, but as mentioned, I took a whopping four inches off the bottom and actually just finished them all with a narrow zigzag rather a twin needle on this occasion. The bottom hem is also very deep at 2.75 inches, but I quite like the effect with this too.

So, all in all I like the top. It’s lovely to wear and I will make a lot of use of it. It’s not exactly the way it’s supposed to be, however, so that I will try and work on for the next version. I’ll be interested to see how it compares with the Maritime Top and will let you know! Oh, one thing I should have said already: there are also options for 3/4 length sleeves, a t-shirt and a dress version, so it probably is worth perfecting the fit for me as it’s so versatile. Have a great weekend!