We’ve moved into our new house and are right in the midst of unpacking, so no sewing for a little bit yet. Instead, here’s a rapid roundup of some garments my lovely Mum made when she came to stay in May. We both share a love of arts and crafts, although she is certainly more “artistic” than I, and it was great to share some excitement about making clothes with her. We had fun choosing some fabric and figuring out what we’d each make, and enjoyed the somewhat collaborative process as we chatted about the process as we were sewing.

First up was a fun pattern for her as she made the Papercut Patterns Anima pants. She had mentioned she fancied a pair of soft sweatpants to wear around the house and I happened to have a length of baby soft terry from LA Finch Fabrics in my stash. My mum hasn’t really worked with knits before, so this was her first excursion over to the dark side of stretch fabrics – bwahaha. Her Anima pants were made in a Size S and she probably could have gone down another size to be honest, but she quite liked the baggy feel for lounging around. I’ll be interested to see if there’s any pilling or rubbing since this terry is so incredibly soft.

Mum is around 5’2″ tall and has a much smaller frame than I, so she ended up taking a good four inches off the length of these pants. We share some similarities, but she has quite slim hips compared to me and is short-waisted, whereas I am more hourglass-shaped and slightly long-waisted. It was interesting to watch someone with a different body type figure out how they wanted to adjust a pattern and pick a size. 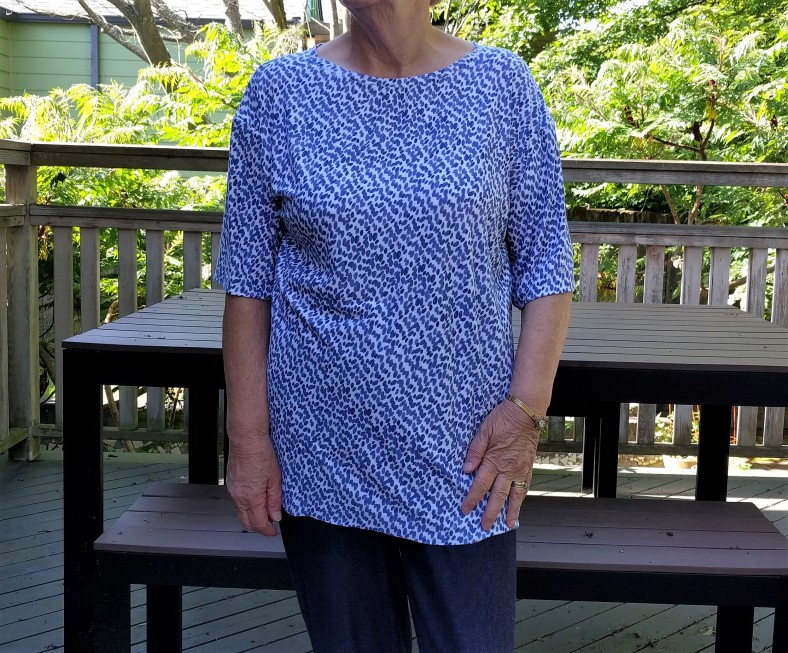 Since I have a serger, Mum decided she wanted to try and make a few knit t-shirts/tops so she could try it out. We took advantage of a Joann Fabrics sale and she bought two knit top patterns and pieces of fabric to give it a go. The first was Simplicity 8336, which is part of their “Easy to sew” range. The styling is “interesting” on the pattern packet, but Mum resisted the urge to tackle the yellow-tasseled version and made Version B.

Since this pic was taken she’s removed a few inches off the length (hence why it’s not hemmed), but it did also work well as a tunic for her. The neckline really suits her and it was a great choice of fabric. The instructions were good and very straightforward, so we serged the whole thing (sleeves on the flat).

The second top was an interesting choice. Simplicity 8016 is a basic knit top with stretch lace blocking detail and has a number of variations. I recently bought some stretch lace for undie-making purposes and had some suitably coloured fabric, so we decided to try out the lace variation D. The instructions were a little different to what I expected here. For example, the sleeve was gathered and inset, rather than sewed on the flat. I’ve never come across that in a knit top before. At first I thought it was because of the lace, but it was stretch too, so I’m really not sure why that was. Any ideas?

Anyway, it was definitely a little trickier to sew and taught us a few things – including a reinforcement of the fact that lace is transparent, so you can’t finish seams the same way as normal. Of course we knew that in theory, but were on a slight deadline by this point, so didn’t really think about it until afterwards. She wouldn’t normally wear a white bra with this, but it was all she had for the short-notice pics! The main adjustment for this top was again chopping a significant amount off the bottom (6 inches I guess?).

Next up were two skirts, but only one was completely finished, so I took pics of that one. Yes, I told you she made a lot! This was the Brighton front-opening skirt by Wendy Ward from her book “A Beginner’s Guide to Making Skirts”. I got this book for Christmas and was quite excited she was making something from it.

As you can see, the skirt turned out to be very pretty, made up in this Cotton and Steel Macramé rayon. It’s lovely and swishy, as well as being very cool in the heat of summer. I must mention though, that preparing the pattern pieces took a lot longer than it should have and quite a bit of head-scratching. The patterns come in a Burda-like sheet formation and this always poses a little bit of a challenge. However, on top of that, quite a few of the pattern pieces were split into numerous smaller pieces. It took some time to locate the right pieces, highlight them, and then figure out how they went together. 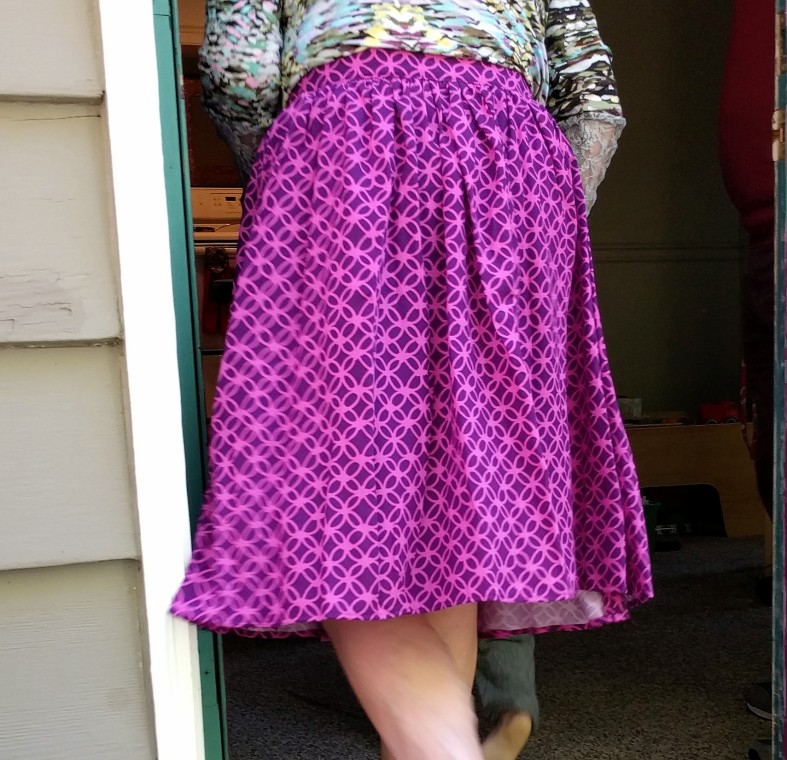 It’s possible we didn’t read the instructions thoroughly enough, but it was a bit of a palaver and I was very impressed at my mum’s resolve to “beat the pattern”! The actual sewing went much faster thankfully and the end result was worth it. I’m hoping that was just a particularly tricky pattern, but I’ll report back when I get around to using the book myself. 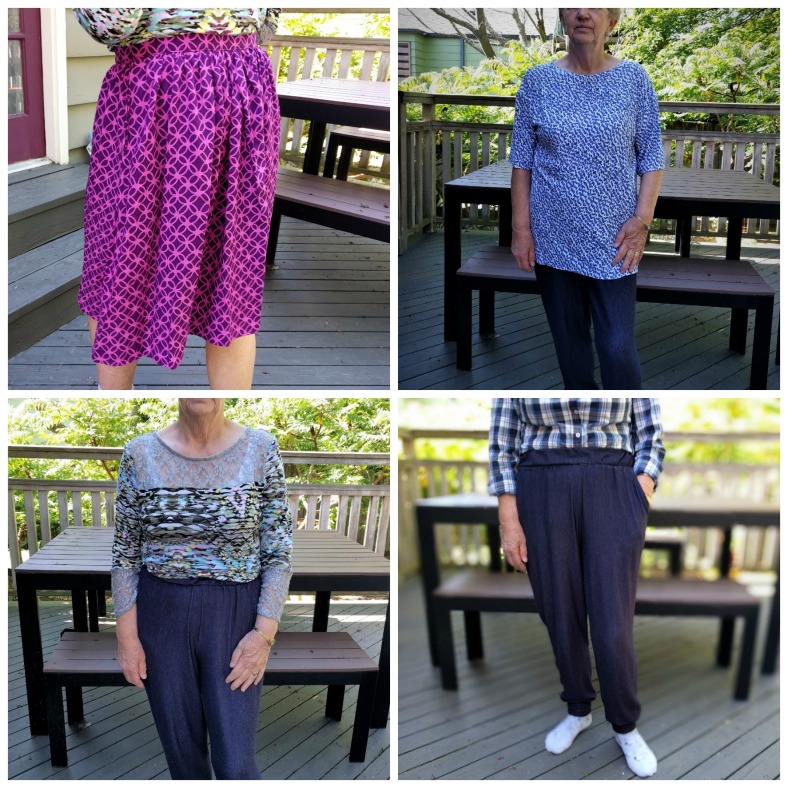 As well as all this, she finished another skirt bar the hemming and even made a toile for the Tilly and the Buttons Etta dress! Go Mum! It was great fun to share enthusiasm for sewing with someone else and I suspect we’d have been quite happy doing not much else! Of course we did lots of other holiday-type things, but I’m looking for the next time we get a chance to sew together. Thanks for letting me post this Mum! 🙂

I got my extra fabric and finished my dress! This is a Zadie jumpsuit hack that Tara from Paper Theory posted as part of the fantastic Sewing Weekender event hosted by The Foldline last weekend.
Here's my test #piercevest. I wasn't sure whether to post this as the pattern has changed a bit (v-neck higher, armholes higher), plus I hacked about with the shoulders, but it's close enough to the final pattern to give you an idea of another look.
Out today - the new Pierce vest/tee/tunic/dress from @ensemble.patterns. I tested this some months ago and it's been through some tweaks and redesigns since. It's been so fun being part of the process and it's definitely a part I enjoy about testing. I love the 80s feel to the pattern and tried to get that mood in the pics, but I possibly just look pissed off. 😅 #piercevest
New post up on my first summer dress of the year - yippee! It's the free @peppermintmagazine and @elbe_textiles collab #peppermintmaxidress and it's a lot of fun! First entry for #sewtogetherforsummer too.
The new Seamwork patterns are out today and I couldn't resist the Kari romper, perfect for summer wear. This is what I was wearing the other day and nearly posted it for Me-Made May, but realised in time it hadn't been released. 🤪 This one's named after my fellow Seamwork ambassador Kari (I bet you guessed her name) and you should check out her version at @littlebrickhouse - it's really cool.
And that's a wrap (dress)! Ending a mixed-weather Me-Made May with a banger of a warm day and some BBQ on this holiday weekend. This is the @allieolson.patterns #highlandswrapdress, which I made in a vintage rayon I picked up for maybe $4 at a garage sale. 💙 I like that it can be dressed up or down and the rayon keeps it lovely and cool for a flip-flops backyard day.
Loading Comments...
Comment
×
%d bloggers like this: