This was both a very satisfying and, at the same time, frustrating sew. Satisfying because I got a block of a few hours over two days in which to complete the project. That doesn’t happen too often, so it was nice to knock it out. This dress has actually been on my list and in my possession for some time, and when I saw it was the August sew for #sewmystyle, it encouraged me to take part in the challenge in the first place. What I wanted was a resolutely practical dress in a muted colour scheme that I could use to tie some of my wardrobe together, and that, I think, I did achieve.

I suppose I’ve now encountered most of the techniques required to construct a dress like this, which also made it a breeze to sew and the instructions were very good. There’s a full sewalong on the Megan Nielsen website if you like that kind of thing. It’s a well-drafted pattern and I will make it again. The frustrating part was entirely down to some silly errors and omissions I made, more of which later… 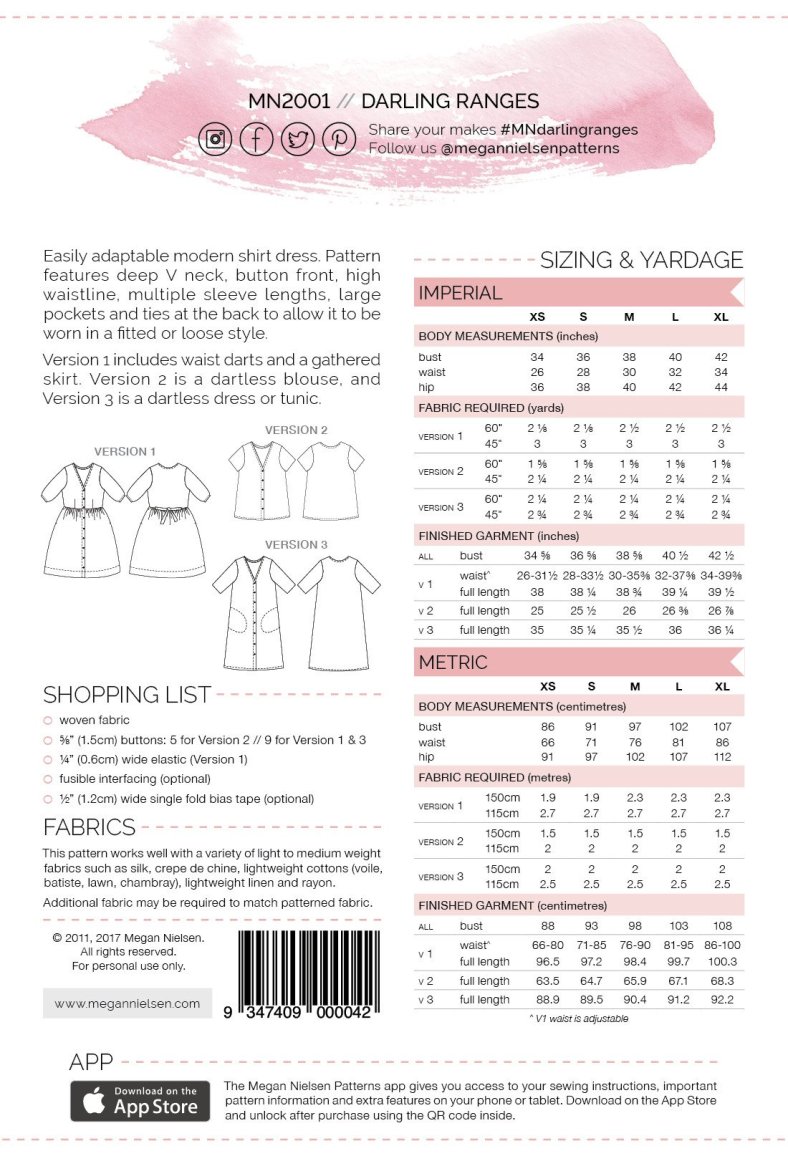 There are three views on the Darling Ranges pattern: a version with a gathered skirt and waist darts; a second version that is a dartless blouse; and a third dartless dress version. I proceeded to make Version 1, the gathered, short-sleeved version. I don’t know what it is with me and short sleeves right now, but I keep defaulting to that version on everything. I guess when it starts feeling more autumnal, the sleeves will lengthen.

I made the Darling Ranges dress in a chambray from Robert Kaufman, and although it’s hard to see in the full-length pictures, the blue-grey chambray has little flecks of primary colours all through it. It’s quite charming, if subtle. The chambray was lovely to sew as you would expect but does have a tendency to fray, so I tried to finish off most seams with a serger. It’s possibly somewhat of a boring fabric choice just because it’s been such a common one for this dress – but I need solids bad style, like. I forced myself. 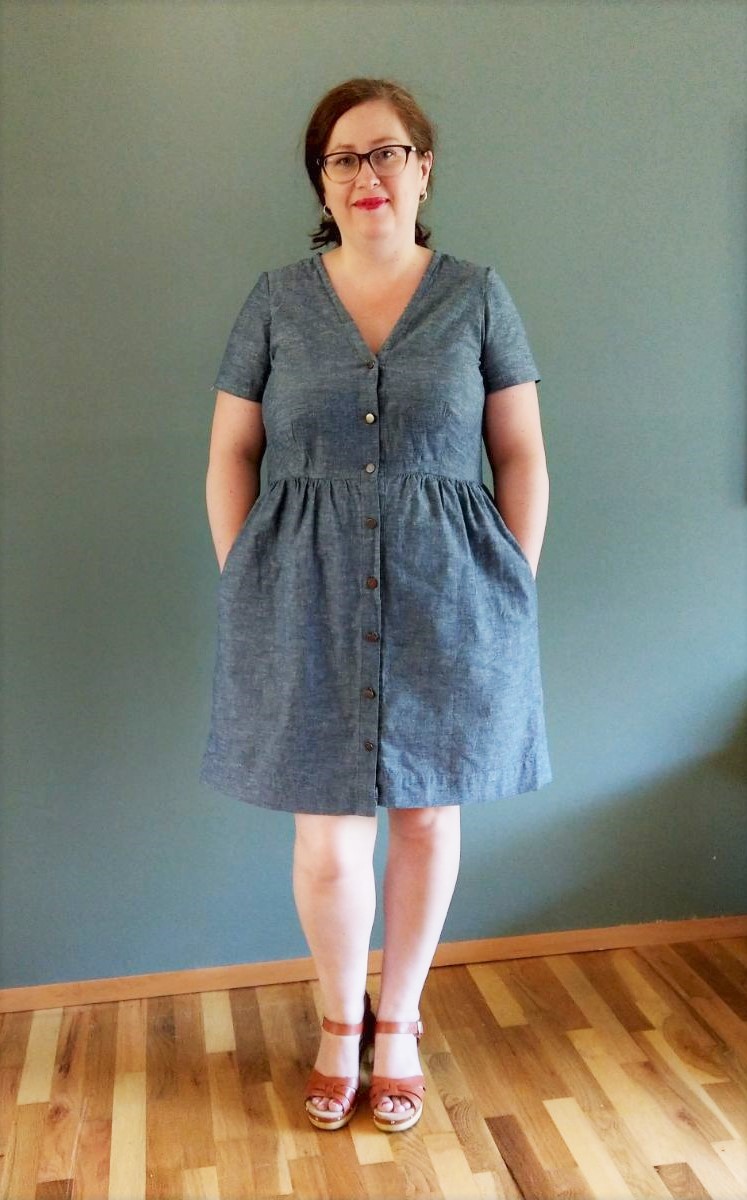 The pdf went together nicely and I cut out the XL size, which corresponds to a 42″ bust and a 34″ waist. However, the cutting part was where I made two errors. I don’t know what on earth was going on in my head the night I cut these, but I cut this pattern, the Colette Aster blouse and the Cali Faye Valley Blouse all the same night and I had been intending to do an FBA on all three… which I didn’t. Argh! I must have been a million miles away. I got away with it (just) with the Aster, but the Valley blouse was a write-off since that needed a large FBA. Secondly, I cut two back pieces rather than one. A small error, but annoying. I just sewed them together with a 1/4″ seam allowance, which of course narrowed the circumference of the dress just that little bit more and which made finishing quite tricky, so the dress is nor fraying a bit along that seam. 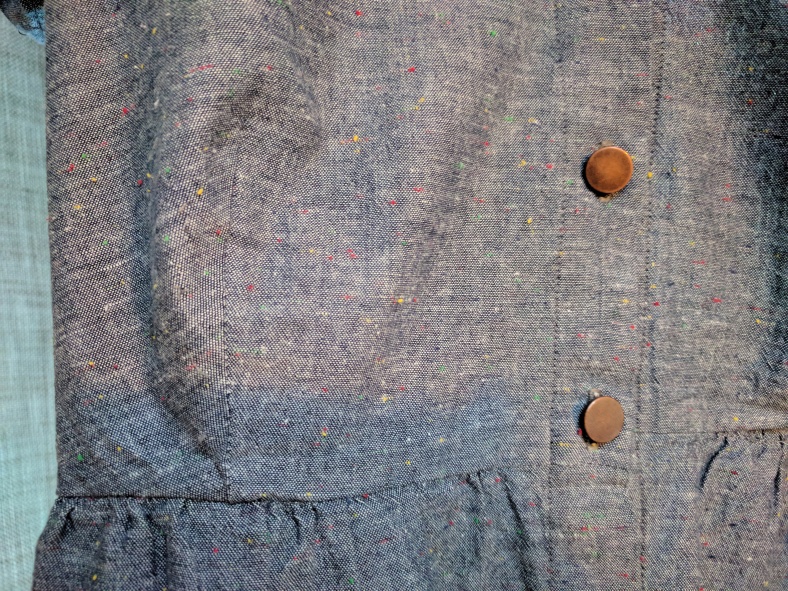 Nevertheless, I pressed on. First, I made the darts. Now, I’d read a few other reviews of the pattern and some of them mentioned having to lower the darts (they are bust darts at the waist). So I fit the pattern to me and yes, those babies were high! I took 1.5″ off the height of the dart and sewed them up. Then I carried on. (That is not the last you will hear of these darts). Some reviewers also remarked that the dress was high-waisted. To be fair, it says that in the description, but I have lowered a few waists recently and it didn’t work out as well as I expected, so this time I chose to leave as is.

I made the in-seam pockets (fantastic size – might become my go-to pocket piece), gathered the skirt and attached it to the bodice. All well and good. I set the sleeves in, which were better than with the Aster, but still required a couple of small unpicks and resewing. They’re a nice shape, the sleeves, and quite comfy on. I would have preferred a little more armscye movement, so I’ll look into adjusting that sometime (you can see it’s a little restrictive above). 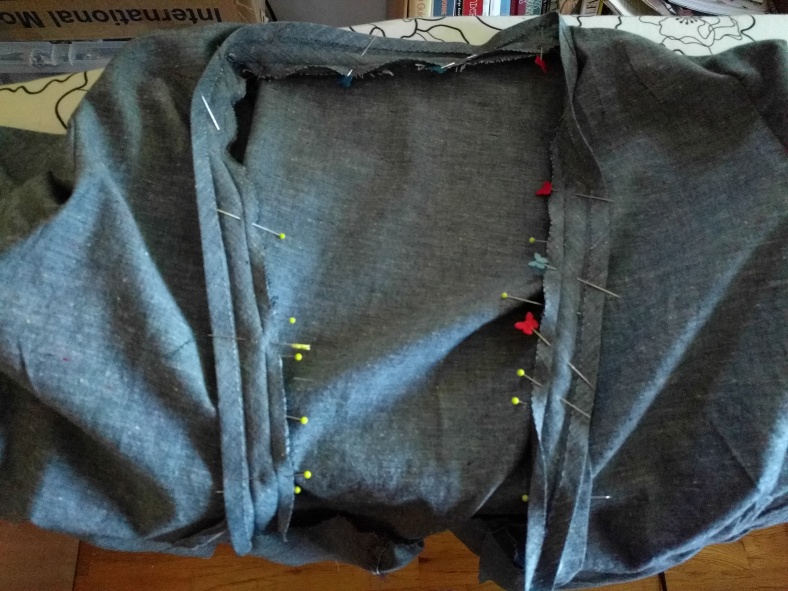 Next were the bias tape and placket sewing. The Darling Ranges dress uses a different method again to how I’ve sewn these before. It gives quite a distinctive finish and is very neat and cohesive, but I felt it was a little bulky with my chambray. It feels fine on, but I might look into reducing that bulk if I made it again in a similar fabric. 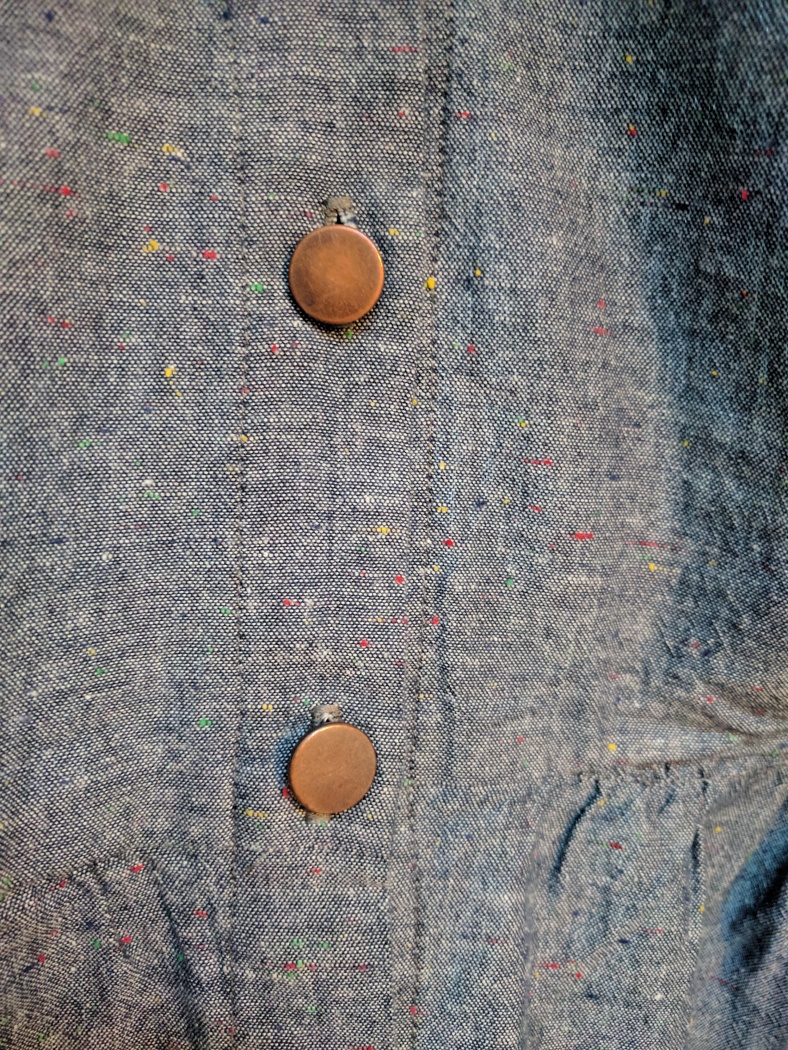 The hem is quite wide at 2.5 inches in total and is turned twice (at 1/2″ and then 2″), but I felt it gave the dress some nice weight. I’m not sure I’d have wanted such a wide hem in a slinkier fabric, mind you. The sleeves are meant to be finished with elastic, but my arms don’t need to be looking like they’ve been packed into sausage skins on a hot day, so I simply folded the raw edges under and hemmed at 3/4″. I finished the front off with some nice vintage brass shank buttons I found at a local sewing consignment store for the grand old price of $1.25 for 12. Nice.

And then I tried it on. Now I have nothing against nipples. Not at all. But I don’t particularly care for fake nipples caused by bad dart sewing and positioning that make me look like I’m exposed to sub-zero temperatures. As an old lady I once knew used to say, “You could hang a wet duffle coat on those”. Gah. So I checked the darts again and lowered them another 1.5″ (yes, that is a three inch reduction in total). Put the dress back on. Now I looked like I had DROOPY stiff nipples. That weren’t even my nipples!! Argh!

Off it came again and I prepared to take the darts down some more. But the problem was that the darts were now becoming so short and squat that they were changing the shape of the front piece and that wasn’t good either. So instead I pressed and steamed the BEJEESUS out of it and washed it and pressed it again. I *think*… it just about worked. Kind of. You can see in the pics that I have one flat side and one suspect nipple. There are also some draglines because of the non-FBA and a gape between buttons 1 and 2. But, still, it’s definitely not unwearable. It will be fantastic in the winter with a jumper over it and some tights and it’s actually not too far off uncovered either. There is a good bit of ease (maybe 3 inches in the waist?) so it is also a very comfy wear. 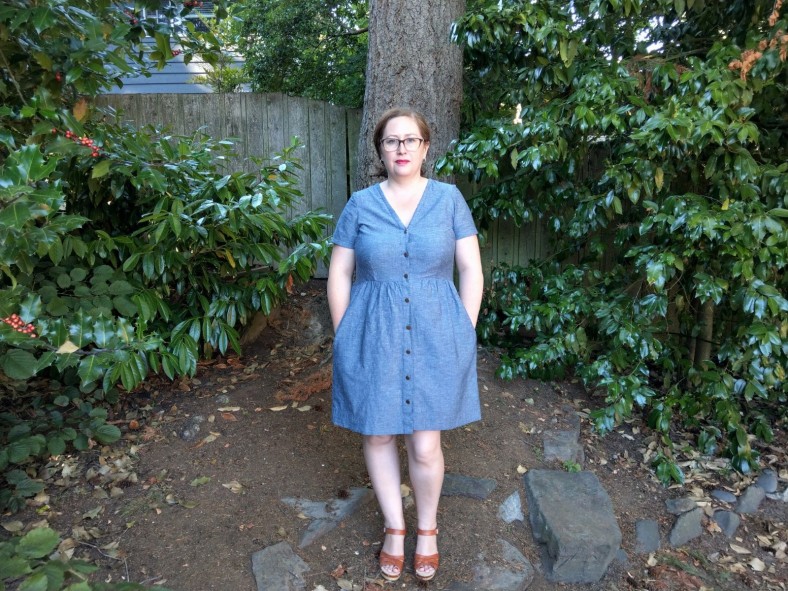 And there you have it – the Megan Nielsen Darling Ranges dress… I love the neckline, great drafting, a flattering dress for many shapes. Just check the bust and particularly the bust darts. And I’ll try to remember the FBA next time…