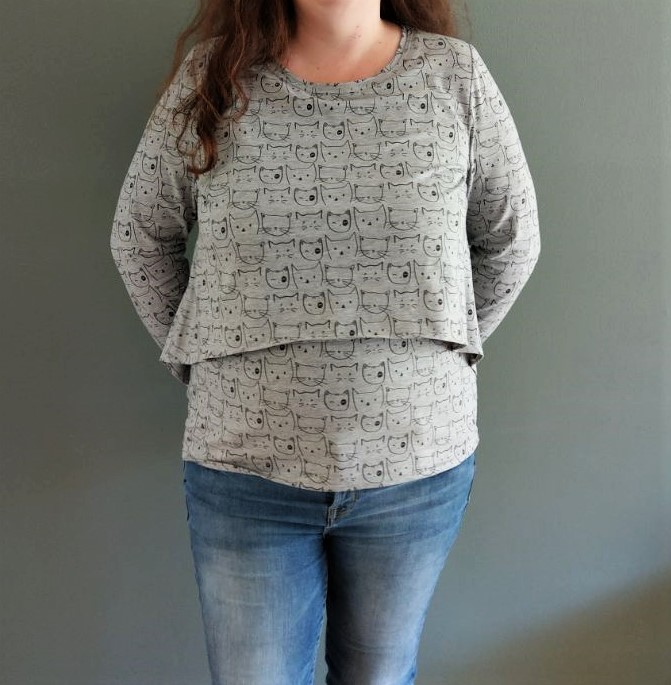 I decided to join in with this sewcialists challenge at the very last minute. I wasn’t sure if I’d have time and I was, somewhat ironically, lacking in inspiration until I remembered my little folders on Bloglovin. The theme of this first challenge was to make something inspired by, or in tribute to, a fellow blogger and I was quite keen to join in as I am definitely a “sewcial” sewist.  I have a bunch of “collections” on Bloglovin, called Things to Sew, Sewing Tips, Inspiration and so on – I’m sure you might have something similar.

I had a wee browse through my collection and noticed a few bloggers that cropped up numerous times. I had a good look through them and then chose this blogger both because of her project, but also because I really enjoy her blog. She writes just the right mix of chat and sewing for my tastes, and always in a straightforward but entertaining manner. I’ve picked up quite a lot of little tips and hints from her pieces and she has a definite sense of her own style – it’s Lara from Thornberry. (I love the blog name too).

One of our shared interests with regards to garments is a love of sculptural patterns. Many of Lara’s garments (for herself, although she makes lovely clothes for her daughters too) have interesting design features that I can appreciate, even if I haven’t made too many myself yet. The particular top that inspired my own project was her version of the Style Arc Kylie top in this lovely blue and white stripe. Isn’t it great?

The Kylie top is notable because it has two layers. The bottom layer is a fairly standard tee shape. An overlay manner is applied over the top with a cropped front and two wings at the back. It gives a really interesting, notable, shape and it was this that attracted me to the pattern. I would ideally have liked to use a stripe as well, for maximum effect, but this is a fabric heavy tee and I didn’t quite have the quantity in a stripe. Having said that, I absolutely love this cat jersey and the cats are sort of lying horizontally in stripes, no? It’s from Stoff & Stil, although I think they’ve sold out now, sadly. It’s a stretch jersey and the two layers with long sleeves definitely make for a rather weighty autumn/winter top. It will keep me toasty! 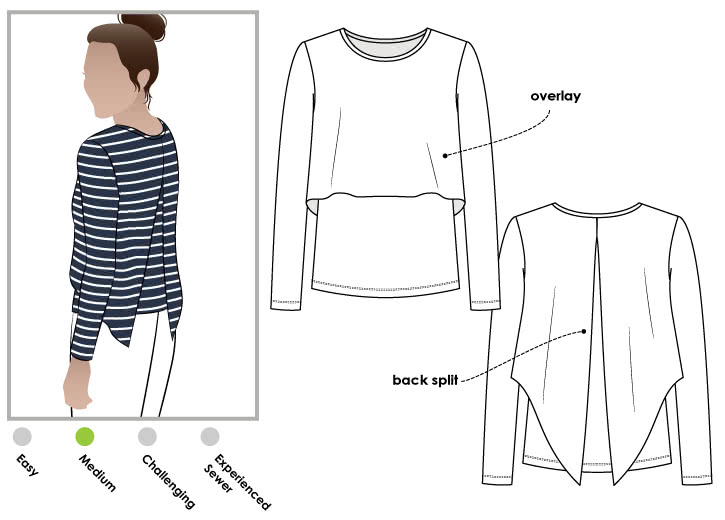 Now… Style Arc. If you’re not familiar with them, this is an Australian-based company that has a good reputation for drafting and which has a vast number of patterns under its belt. I’ve admired their work for a while and their designs often have interesting detail and geometric elements like this top. However, they’re also well known for their sparsity of instruction and this factor has put me off in the past, as a relative newbie.  Since I’ve made a few tees now (and the Kylie top is essentially two tees, joined), I felt more comfortable about tackling this garment. This was the push I needed!

I made it in a size 16 and one other thing you should know about Style Arc is they don’t send patterns with lots of sizes. You receive (at least as a .pdf) one size up and down from the size you choose. Luckily, I chose fairly wisely and the 16 did the job nicely, but it would be annoying if you usually grade up or down more than one size. As far as construction goes, the first half zipped along with the use of the overlocker and much of it was very standard t-shirt construction. Serge the shoulders and side seams of both the main body and the overlay. Then join the two wings of the overlay back and hem allllll the way round the overlay by turning the edge under and topstitching. Simple, but effective.

Next the body and the overlay are joined by applying the neckband… and this is where I hit a stumbling block. I have sewn plenty of neckbands on tees, but with this one, you are using it to join the two body pieces. I tried to follow the instructions, but I kept getting one piece RSU, the other WSU, or the neckband was in the wrong place. I ripped that damn neckband out three times and just thanked my lucky stars I was cautious enough not to have serged it on. (I’m not always that smart). I looked all over the internet for help and a few people had mentioned issues, but not so much a solution, and in the end I finalllly found out where I was going wrong. Turns out the instructions weren’t quite right for a start. For people having the same problems as I, here is exactly what I did.

I’m sorry I don’t have pictures, but I was so past it at this point. This takes 5 mins once you get your head round it. Seriously, 5 mins. 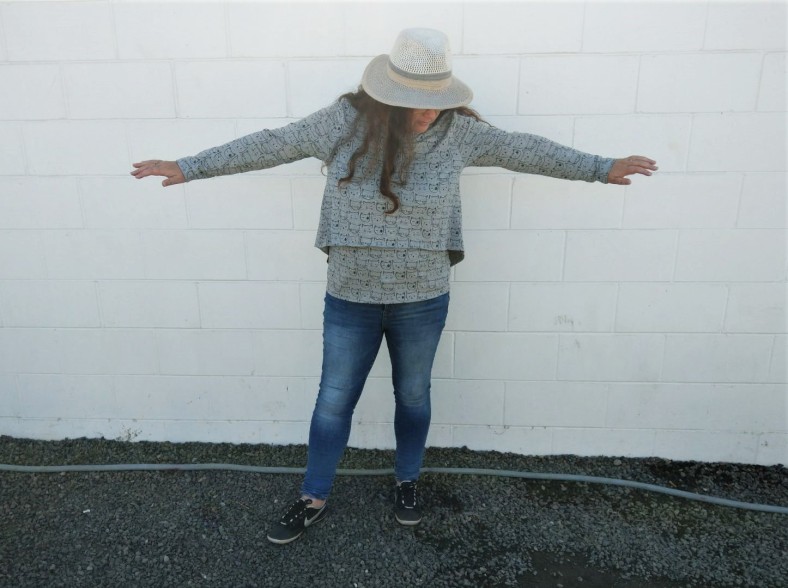 After that you attach the sleeves by setting them in, rather than on the flat as is normal with a tee. I’m still not exactly sure why, but I guess it’s to do with shaping. Finally, you hem the body and sleeves of the top. Ta da! This jersey is one of the curly types, so the hems do curl a little after you’ve had it on a wee while, but with this shaping it just adds to the effect. 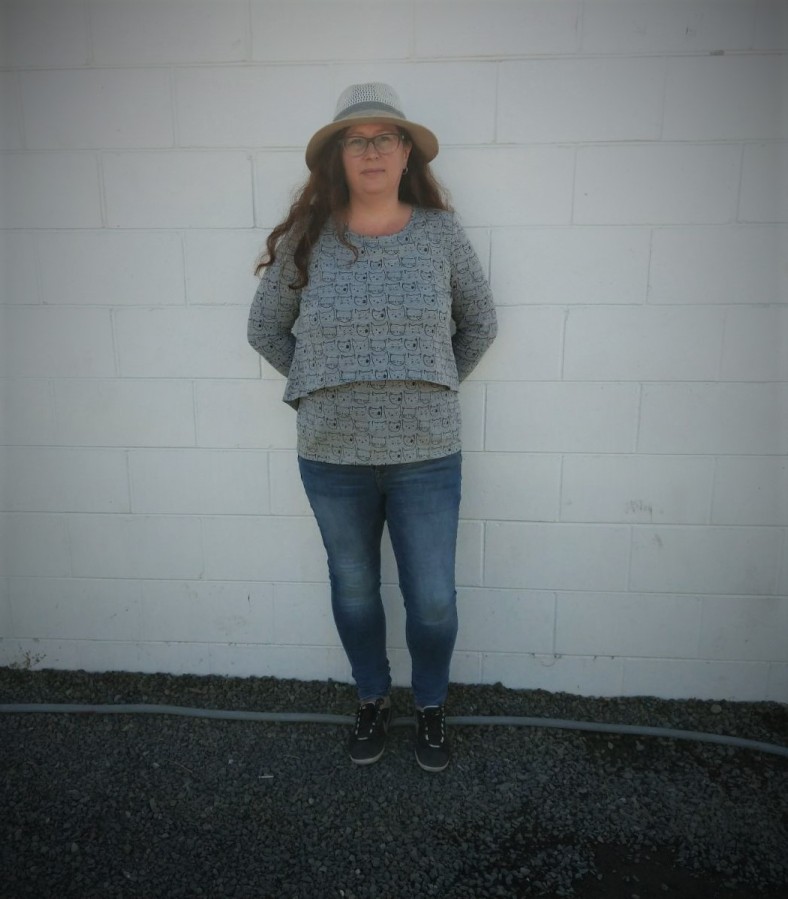 And lordy, do I love it! It’s comfy, it’s eye-catching, it’s warm and it’s pretty easy to sew up. Without the neckband kerfuffle, I reckon you could have it finished in under 2 hours. I’m glad I went for it, and it has definitely made me keen to try some of Style Arc’s other patterns. I’d go as far as to say it’s one of my favourite projects ever. So a big thank you to Lara for giving me the push with her delightful version and I leave you with a recommendation to give it a go yourself if you like the look of it!

The deadline for final round entries for the #prsewingbee2021 was today and I just submitted this little lot. The theme was an outfit for a post-pandemic activity/event. Like so many people, I would like to see my family in real life and so my choice was an outfit that would take me from my home in Seattle, on a plane to Scotland, and straight into a MacPherson family shindig.
I haven't been posting much because I was working like a demon on my final round outfit for the #prsewingbee2021. I only had a few days before spring break but I made it! Now we're on our first little break for quite a while and about to go out and (SD) explore San Diego's outdoor beauty.
Another look at my test version of View A of the @closetcorepatterns #mileendsweatshirt. My Mashup of B+C is further back in the grid and the pattern review post is linked in my profile if you like a good old-fashioned long read. :)
PR Sewing Bee Round 3 nearly finished me off. The round was pattern-matching and I posted my entry with 4 minutes to spare. 4 minutes. Argh. I had something of a cockup this afternoon that took several hours to fix and I just scraped in. I'm sad I didn't get to add all my detailed photos, but, oh well, that'll teach me.
Here's a peek at my final tester version for the upcoming Pierce pattern from @ensemble.patterns. Apparently it's violet week for #wearhappycolor2021, but I don't know that I have any! So this is blue again, maybe sliding into purplish soon. :) #piercevest
I forgot to take a pic yesterday but here's today's outfit. It's the last couple of days of #wearhappycolor2021 and I would never have put this together has it not been for this challenge, which is 100% the benefit for me.
Loading Comments...
Comment
×
<span>%d</span> bloggers like this: