A long-sleeved wrap dress seems like a perfect autumn garment to me, but in this case the fabric informed the choice of both dress and exact pattern. I bought exactly 2 yards of this beautiful Verson Puoti Enchanting Life jersey knit from Jumping June Textiles. These euro knits are not cheap and people seem to buy small amounts to make kids clothes, mostly. When I saw this particular design though, I knew I wanted to make something adult-size. The colours are so saturated and the design has a 70s feel for me (appropriately). I just finished reading a DVF biography (first half interesting, second half not so much) and was perhaps channeling her vibe into my decisions. The fabric has a weight of 200gsm, which is perfect for a wrap, giving a little structure. 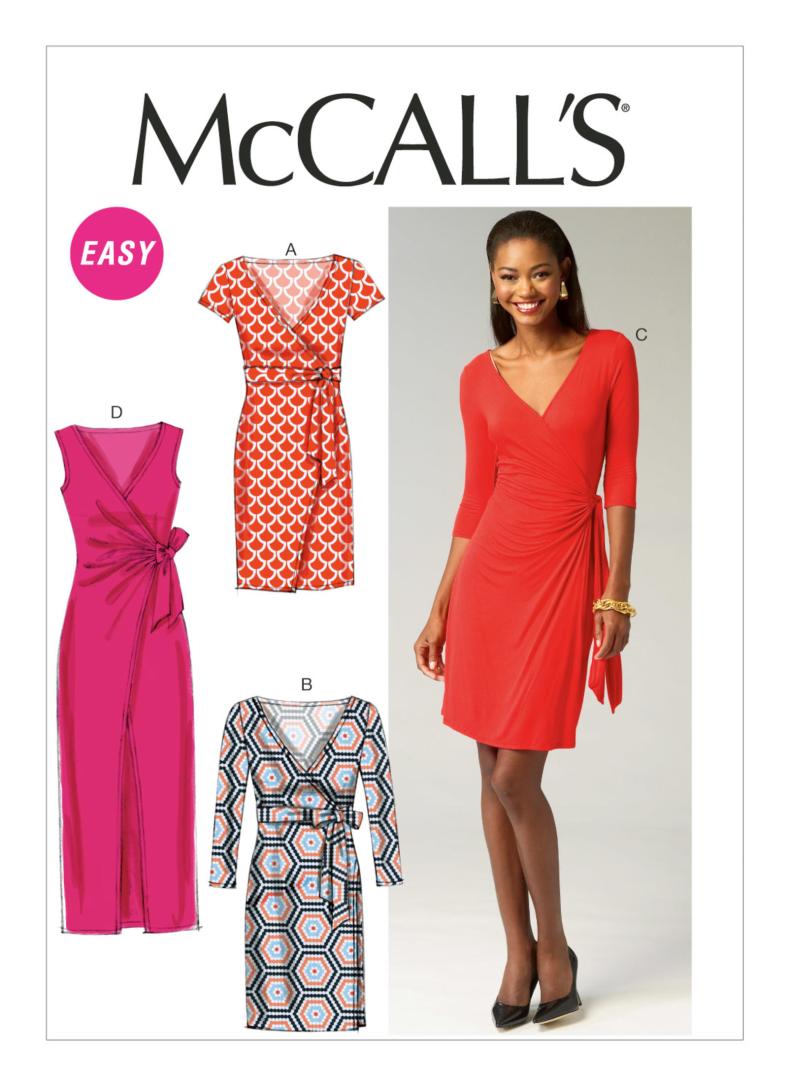 However, there aren’t many wrap dresses you can make with 2 yards of fabric. Indeed, the McCalls 6884 required 2 5/8 yards for View B, the long-sleeved version in the size 20 I made. I really, really wanted long sleeves though, so I figured I would try some pattern tetris. Well, I managed to squeeze it out with just one of the ties needing pieced, so it can be done! It helps that the M6884 is quite short and also a faux wrap dress, which allows a little less width. The version I made also has a straight skirt as opposed to the diagonal shape of View A or gathered waist of Views C and D. 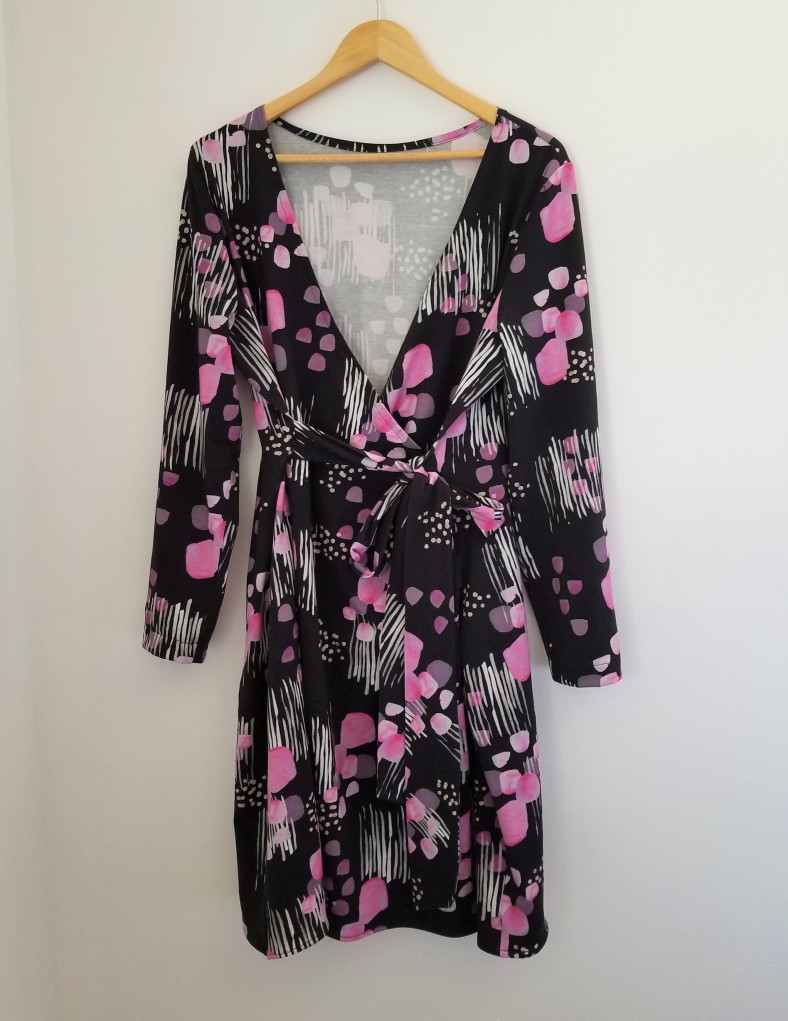 It’s a popular pattern and there are tons of reviews on patternreview.com. Most people mentioned it was low cut (it is) but forgive my European brazenness (don’t be fooled by that prudish British stereotype), but I don’t care. It shows a mere whisper of my ample bosom, and I’m perfectly ok with that. Interestingly for a knit, most reviews suggested the pattern was also fairly true to size. So I went with a 20, which matches my measurements and… it’s a bit too big. Darn it. I should have made an 18 or even a 16. Just because I didn’t totally trust the sizing, I left the shoulder seams unfinished, so I’m going to go back and take them in a bit.

I haven’t worn a wrap dress in quite a while, and I suspect that’s because I was working in a very young, casual environment prior to moving stateside, and a wrap dress has always felt like a “grown-up” garment to me. But, yeah, I’m now a grown-up mum and it’s pretty universally flattering, so why not? The construction of this dress is satisfyingly fast, as befits a pattern marked “Easy”. The edges are finished by simply folding over and stitching as a narrow hem, which worked nicely on the grain, going down the dress, but by God, that cotton lycra liked to curl something crazy on the hem. I gritted my teeth and got it as even as I could, but that was the worst part for me.

A couple of other alterations I made:

2. I was very tempted to put the sleeves in flat since it’s a LOT easier, but I did ease them in as per the instructions, in case it affected the shaping. I think they turned out nicely, but I will try them on the flat next time. 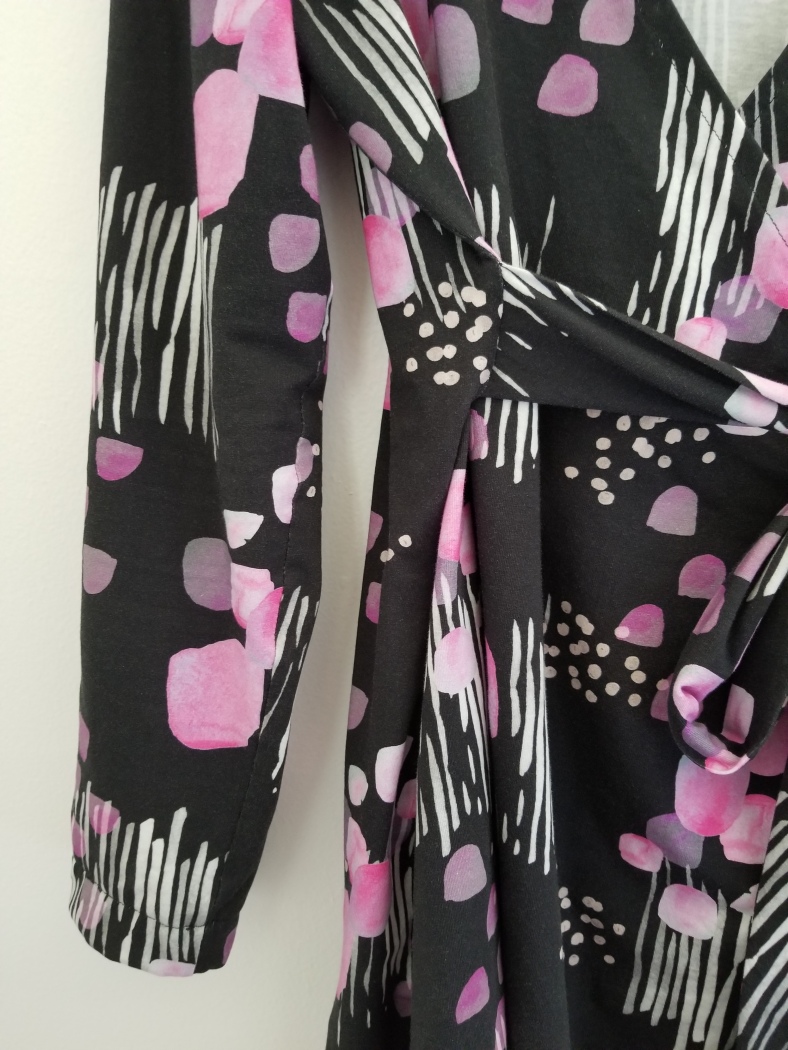 3. As mentioned, I need to bring in the shoulders around 3/4 ” and the sleeves needed two inches taken off them, and could possibly do with another 1/2″ or so. The length of the dress was fine, however. (I’m around 5’6″ for reference). 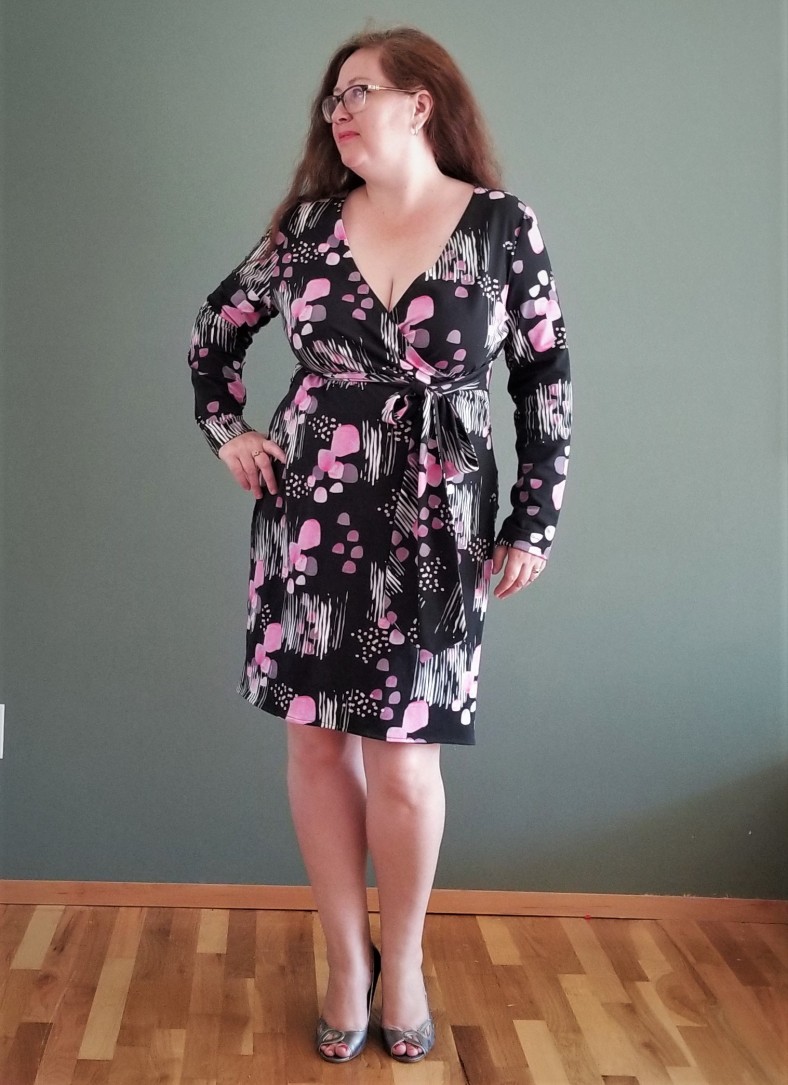 4. One word about markings. I used my usual pen markings for the various points, including the important “where it meets in the middle” marker, signifying where you overlap the front. Of course, by the time I turned the edge and hemmed I couldn’t see the markings any more and had to drag out my pattern pieces to figure out where that was. Annoying. 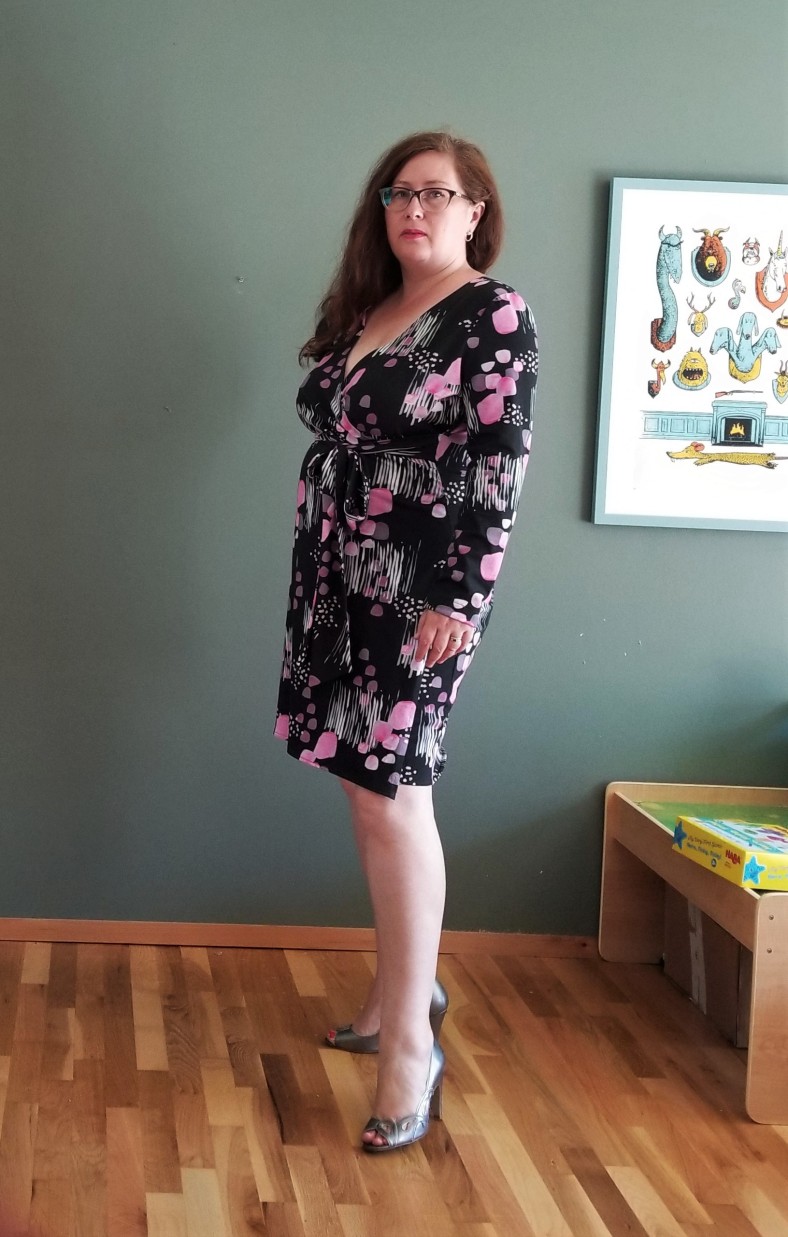 What else to say? It’s a bit saucy, but still quite covered. I suppose that’s the genius of it. I even don’t mind it from the side, which is unusual for me. I guess this will become a date night kind of dress, although I could make it more casual with a cami or something underneath. It’s very comfy and there’s a good reason so many people have made it. It will take a little finessing to get that overlap tension just right without the full wrapping mechanism. Perhaps I’ll try a full wrap dress next…