I love cardigans – they’re so cosy and comfy and easy to fling on and off. I already made the Jennifer Lauren Juniper cardigan, which I have been wearing non-stop and highly recommend, but I wanted a couple of less fitted slouchy cardis for a quick layer of snugness on these progressively colder nights. Cardigans are also incredibly quick to make, especially on the serger, and I also used the goal of the Instagram challenge #cosycardichallenge to kick my bum into gear and get not one, but two cardis knocked out by the end of October (admittedly I am in there by the skin of my teeth). 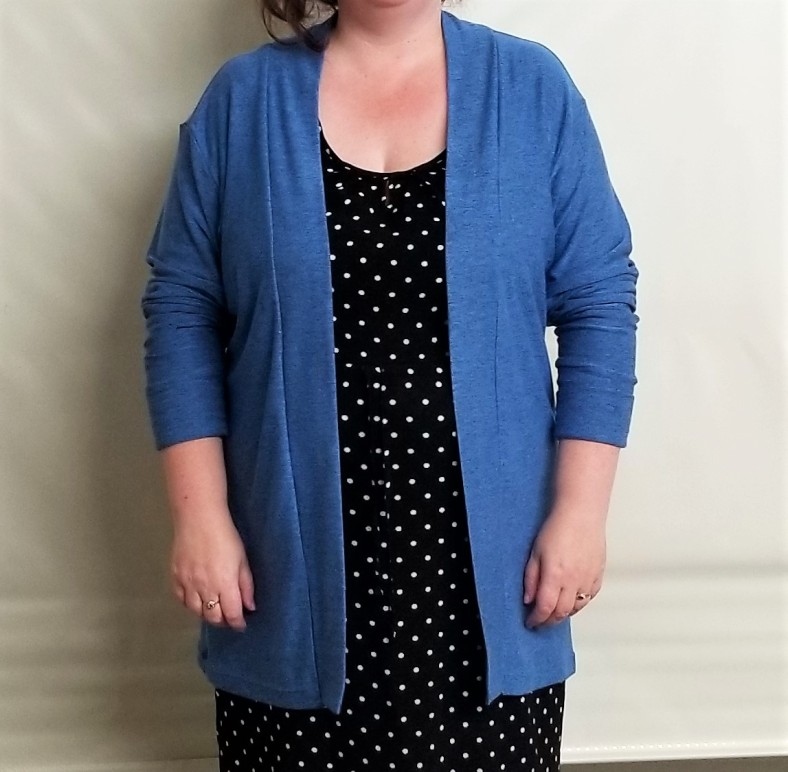 So, without further ado, a few notes on the Seamwork Oslo and Delia Creates Carrie cardigans. The two garments are quite different in shape but have very similar construction methods. The main difference is that the Oslo is a traditional jacket shaped cardigan with a hemmed bottom, while the Carrie is circular in shape with dolman sleeves and is finished by a neckband that is attached all the way round, including the hem. They both took around an hour or two to create, although it’s hard to gauge when you’re interrupted incessantly by a 2 year old who wants to play trains all day. Let’s take a brief closer look at them. 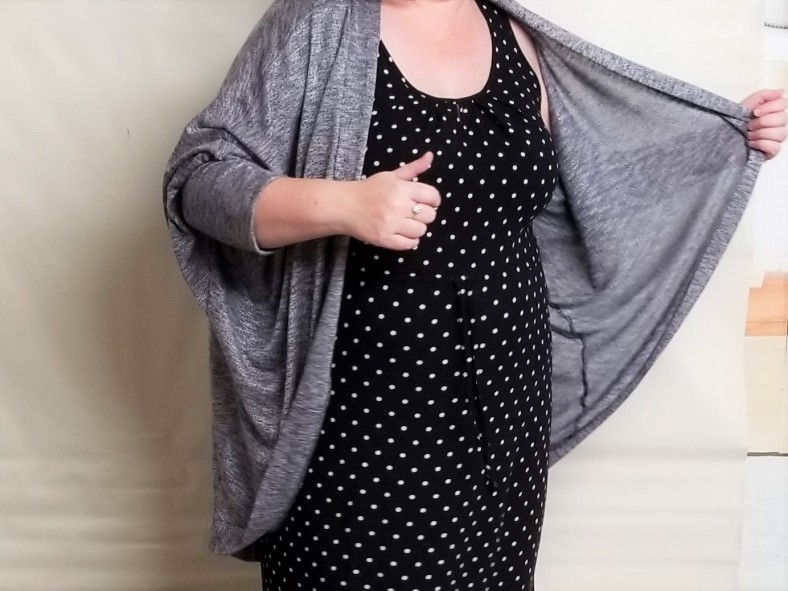 First, the Carrie cardigan. Delia Creates is a new company to me and I came across the cardigan looking at other pics under the #cosycardichallenge hashtag. My interest was immediately piqued because around a year ago I misplaced a very similar RTW cardigan from Urban Outfitters which I loved dearly. When I saw this, I immediately downloaded it and added it to the plan. 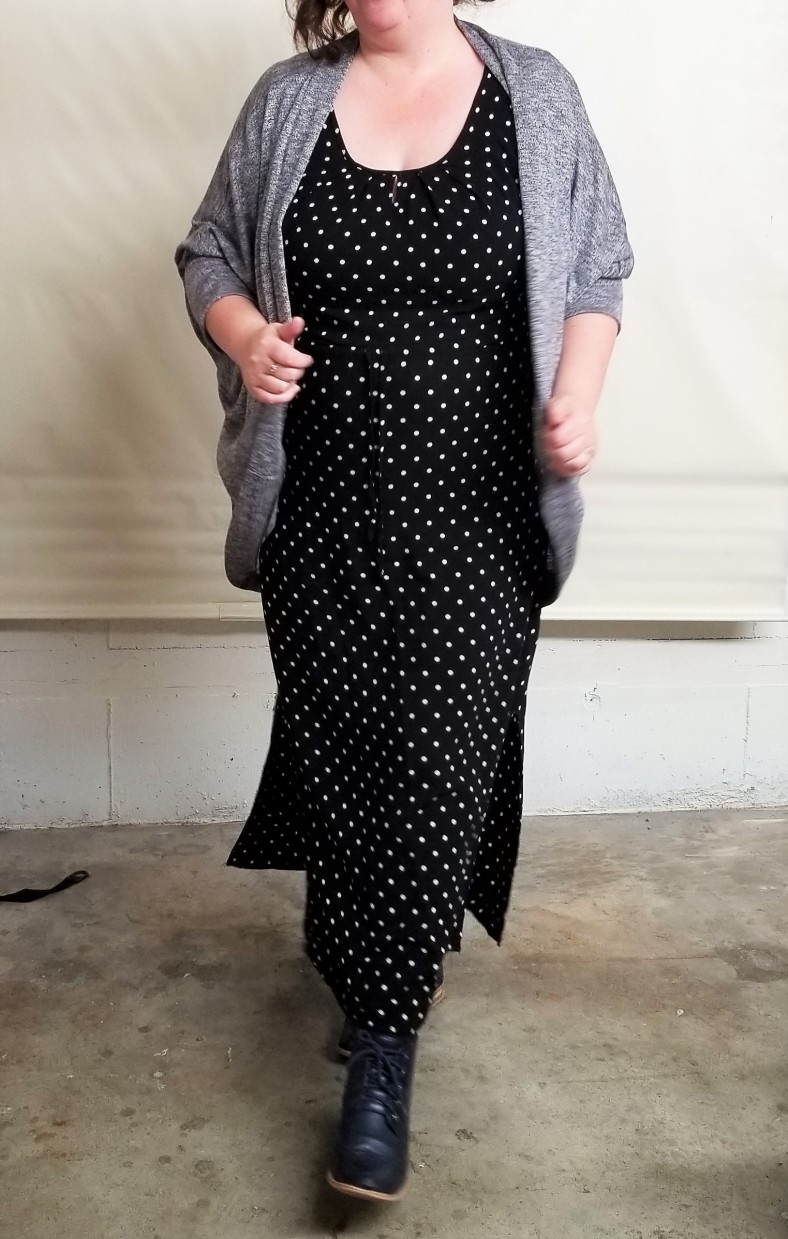 For both cardigans, I used Swafing lightweight rayon sweater knits that I purchased from Jumping June Textiles, and, I tell you, putting these on your body is like wearing a puff of baby’s breath. Cloud soft and billowy, they’re perfect slouchy cardi fodder. For the Carrie I used the 135 gsm Lieschen knit in black (no longer available but I’ve linked to the grey). I made an XL to make sure I got plenty of room and the pattern told me I needed 3.5 yards for the long version with long sleeves (there are also short sleeves and a shorter length to mix and match). However, believe it or not, I pretty much squeezed it out of 2 yards, so that’s quite a difference. I did piece a part of the neckband but I was only millimetres away from having enough, so I really think if I’d maximized the other pieces’ layout I would have had enough. Just something to bear in mind!

The pdf was easy enough to put together and quite economical at 27 pages. There were no page markings for sticking them together, however, and no notches at all. I can’t say I desperately needed them, but I thought it was unusual. It was nice to be given the measurements for the neckband in case you just wanted to draw it rather than trace it. I reckon this is easier on a drapey lightweight fabric, so it was a nice touch. I cut out the knit with a mat and rotary cutter and completed the whole garment on the serger, It was very simple and quick and I like the result!

The Oslo from Seamwork is a more traditionally shaped cardigan and I used the slightly heavier 200 gsm blue Lottchen sweater knit. This has a brushed inside that is just heavenly soft. Again with the Oslo I made an XL with a 2.5 yard fabric requirement. My records say I only bought one yard of the Lottchen and it did feel like just one, so it seems that’s all I used. Edit: I checked again and it was actually 1.5yds. To be fair, I did halve the width of the neckline to make it fit, but still quite a difference. The fact that the knit was 63″ (160cm) wide definitely helped out!

The Oslo also came together very smoothly. I would say the XL is a little oversized in this pattern as the sleeves are really long and the shoulders wide, but this is fine for my needs. I hemmed the bottom with a twin needle and everything fit together smoothly. I did sew the cuffs together the wrong way first time (cue verrryyy annoying serger thread unpick) but that was a minor distraction.

The Carrie pattern uses a 1/2″ seam allowance as it’s intended for drapey fabrics and my feeling is that it helped with sewing this knit. The Oslo uses 3/8″ and although this was fine, I wouldn’t personally care to sew this fabric with the standard knit 1/4″. 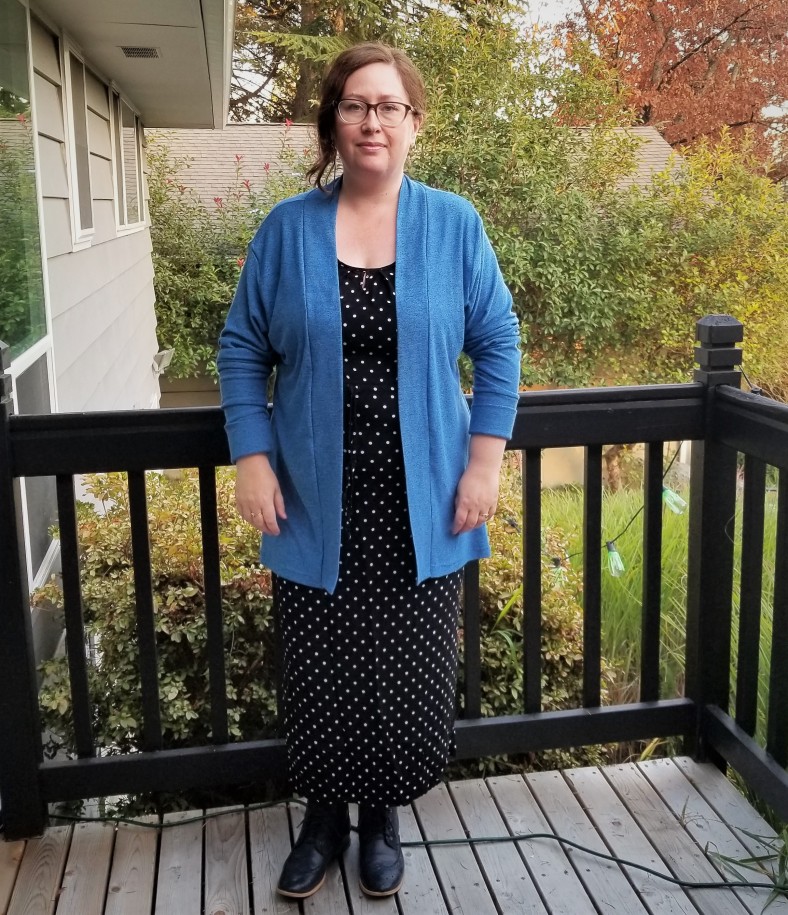 Overall, I’m really happy with these fast and satisfying knit projects and can see the Carrie in particular becoming a bit of a TNT for me. Maybe a good Christmas present idea too? Has anyone else started their holiday sewing yet? I feel like I need to start imminently!