During 2017, I really wanted to try making some trousers, or at least dip my toe into  trouser-fitting waters. I closed the year with Closet Case Patterns Morgan jeans (yet to be blogged), which definitely got me in there, but the first opportunity that came along and got me started was a call for testers in September from the lovely Diane at Blue Dot Patterns.

The Coffeehouse pants/trousers are a very straightforward pair of cropped wide-leg trousers that are best made in a light-medium weight fabric. In my opinion, they’re a perfect pair of trousers for a beginner, because they get you familiar with all the basics of putting a pair together without introducing too many fancy design details. The added bonus is that I really like them! In all honesty I wasn’t expecting to, since trousers are notoriously hard to find even in ready-to-wear, and I’ve never been too successful with “floaty” trousers. The chances of my finding a decent-fitting pair right away were slim, but it worked! In the pics I’m wearing them with both a regular-length Kyoto tee and a cropped Astoria sweater to show the effect of both types of top.

Since the design is quite simple, I decided to make my wearable muslin in a lurid orange crepe I got from LA Finch Fabrics last year for the grand sum of $1 a yard. It comes out a little more muted in the pics, but, believe me, it’s pretty bright! I had no idea what I was going to do with it but I figured I could use it for muslins if nothing else at that price. However, it’s perfect for these! It’s just dark and thick enough that it’s not transparent, but still light and breezy enough to swish around in, à la Gloria Swanson. Just don’t look tooo closely at some of the stitching. I didn’t finish these quite as well as I would a non-muslin pair – but I’ve been wearing them out nevertheless! 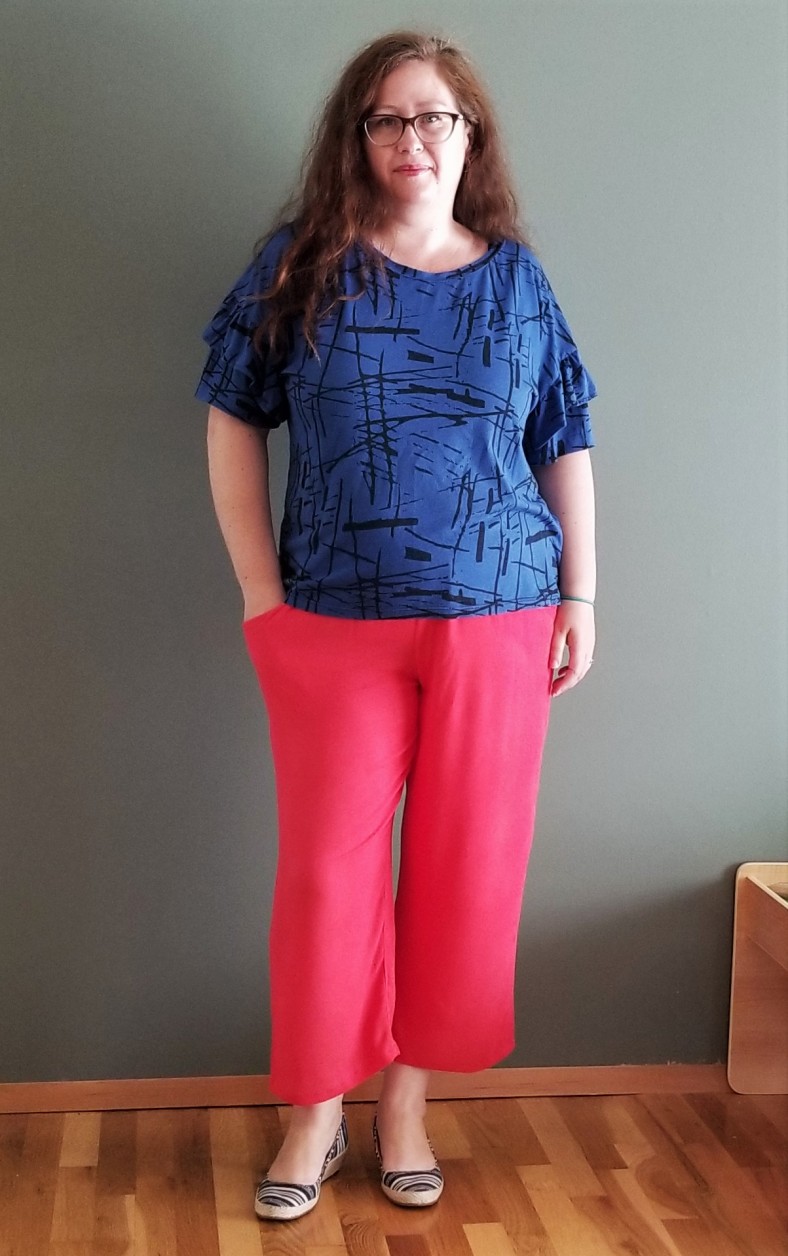 The pants are straight-legged and have (joy) an elasticated waist, which makes them so forgiving to fit. There’s a fair bit of ease built into the hip, and so I went for a 14 at the waist, graded down to a 12 at the hip. This worked out well for me. When it comes to length with cropped trousers, it’s a bit of a “how long is a piece of string” free-for-all, since one person’s cropped is another person’s culottes. I’ve noticed the just-above-the-ankle length is very au courant, and actually suits me rather well, not being bestowed with gazelle-like ankles and calves. So I left them at the recommended hem allowance of 5/8″ turned twice. For the record, I have shorter legs and a longer torso, so you will want to check the length, but it’s a simple affair. All the necessary finished measurements are given in the pattern, so do take a look.

Now that the pattern is released, I definitely want to make another pair, perhaps in something slightly heavier. The only adjustment I will make is to add around an inch to the crotch rise, but this is a common adjustment for me. As far as I know there were no further changes to the final pattern after this version, but if this isn’t correct, I’ll make an edit and mention it in the comments. The pattern is on sale right now over at Blue Dot Patterns, so if it’s piqued your interest, now’s the time. 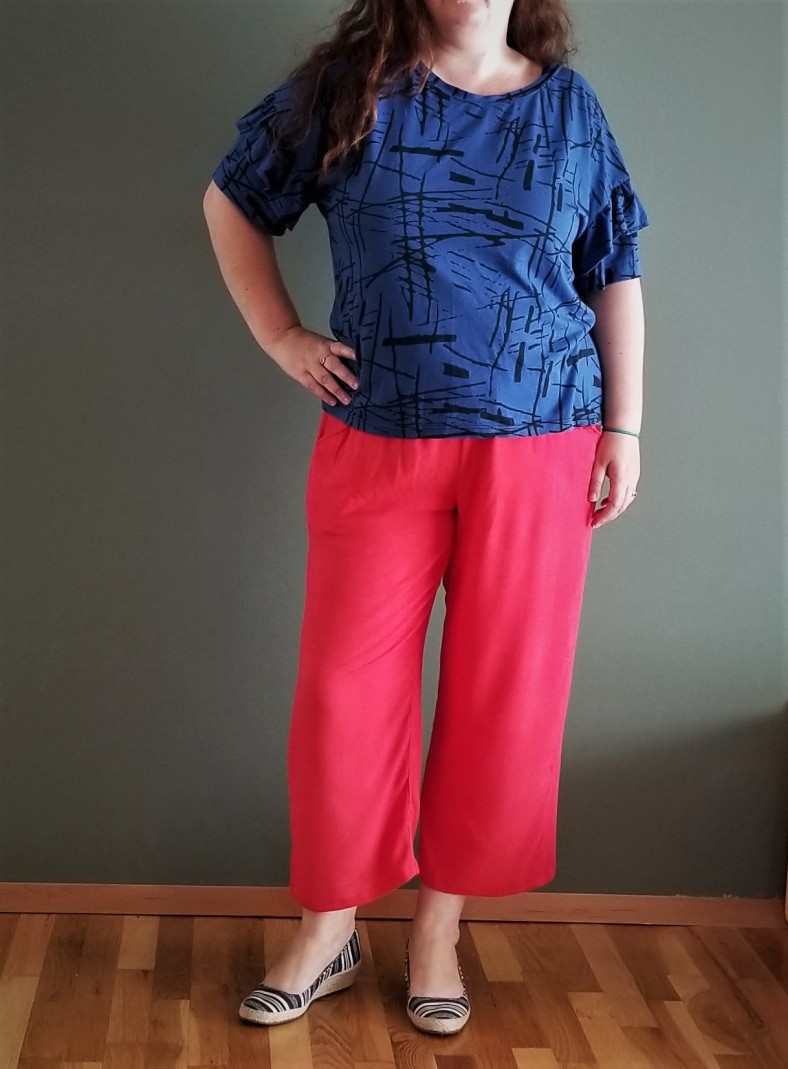 Another lookie at my Round 3 "Pattern Matching" Ruth raincoat from Ottobre Woman 05-20. There's a blog post up today with all the details and lots more pics for anyone who likes the long read. (Link in bio)
The deadline for final round entries for the #prsewingbee2021 was today and I just submitted this little lot. The theme was an outfit for a post-pandemic activity/event. Like so many people, I would like to see my family in real life and so my choice was an outfit that would take me from my home in Seattle, on a plane to Scotland, and straight into a MacPherson family shindig.
I haven't been posting much because I was working like a demon on my final round outfit for the #prsewingbee2021. I only had a few days before spring break but I made it! Now we're on our first little break for quite a while and about to go out and (SD) explore San Diego's outdoor beauty.
Another look at my test version of View A of the @closetcorepatterns #mileendsweatshirt. My Mashup of B+C is further back in the grid and the pattern review post is linked in my profile if you like a good old-fashioned long read. :)
PR Sewing Bee Round 3 nearly finished me off. The round was pattern-matching and I posted my entry with 4 minutes to spare. 4 minutes. Argh. I had something of a cockup this afternoon that took several hours to fix and I just scraped in. I'm sad I didn't get to add all my detailed photos, but, oh well, that'll teach me.
Here's a peek at my final tester version for the upcoming Pierce pattern from @ensemble.patterns. Apparently it's violet week for #wearhappycolor2021, but I don't know that I have any! So this is blue again, maybe sliding into purplish soon. :) #piercevest
Loading Comments...
Comment
×
<span>%d</span> bloggers like this: