It’s March, so about time I got to working on one of my #menswearmakenine and I figured I’d get to it with a biggie. I did already make two of my patterns just before New Year, although I’d planned them for 2018, so this is my first bona fide make for this year. This is the third pattern I’ve made from the inaugural Ottobre Family magazine and it’s another great-looking pattern. Slim fit “European-style” chinos, which is right up my husband’s alley as he has proportionally slim hips and legs. The other patterns I made were the Cloud Grey sweatshirt and the Urban Classic Briefs, so I was hoping the Ottobre standard would be maintained with this latest project.

And I’m pleased to say I think it was! I’m really happy with how these turned out: in the photos I even think they have quite a RTW look. I made the largest size that these came in, which is the EU 56. I still have an issue with measuring my husband’s bottom half. By my measurements, he was slightly larger than that at the waist, but that, in turn, was quite a bit bigger than his RTW size. So I made the 56 as a compromise and then when we did the first fitting, they were too loose. I took them in quite a bit and now they’re just very slightly too tight around the hips – but nothing that a couple of wears won’t cure I don’t think. It’s all rather confusing, but at least I’m getting closer to his “size”. 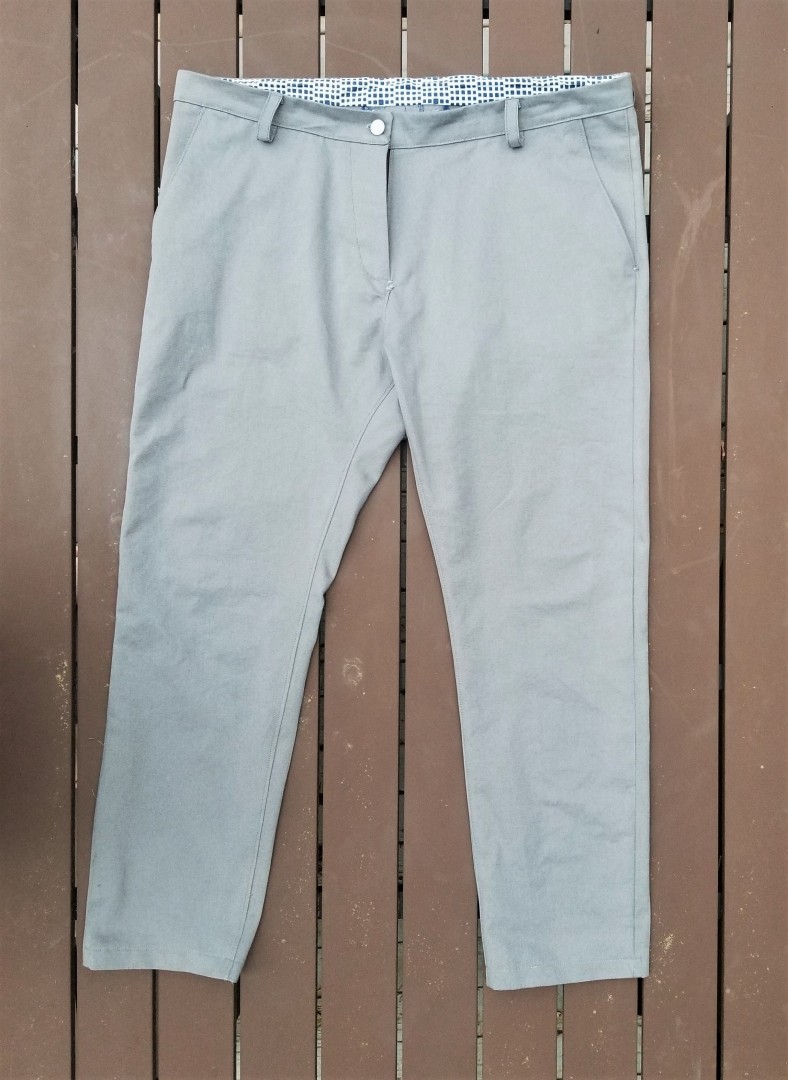 I have to tell you I was somewhat nervous to be making classic men’s chinos using Ottobre instructions. They’re so brief and I was just hoping the experience of my recent Morgan jeans make would stand me in good stead (it did). I remembered to add the seam allowance to the pattern for once, which was a relief, and used some lovely sober stone grey twill I purchased from the Style Maker Fabrics stand at the recent Sew Expo show in Washington. They have such nice fabrics online, but my knowledge of bottom-weights is not all that good, so it was so great to be able to touch them in real life. They had a variety of cool colours, but my husband had specified he wanted “grey or charcoal, nothing crazy”. Huh. (So I bought some blush pink for myself :D). For the facing and pockets I used some quilting cotton I had left over from my Fen dress.

Anyway, my slight concern was well-founded as I got stuck at Step Number 1! Haha. This involved making the front pockets with pocket bags and side slashes. As I found out, some methods have you make the fly front first in the order of construction, but Ottobre started me off here and I couldn’t for the life of me figure out what they were going on about in the first couple of sentences. After some head-scratching and knowledge-gaining – thanks to @bustersews (Andrew from mensew), the Thread Theory Jedidiah sewalong and definitely the trousers section in the book “The Gentleman’s Wardrobe”, I figured out what was going on. I do understand now what they were asking me to do, but without pics or experience, it was as clear as mud. I highly recommend using the above sources if you haven’t done this before either. 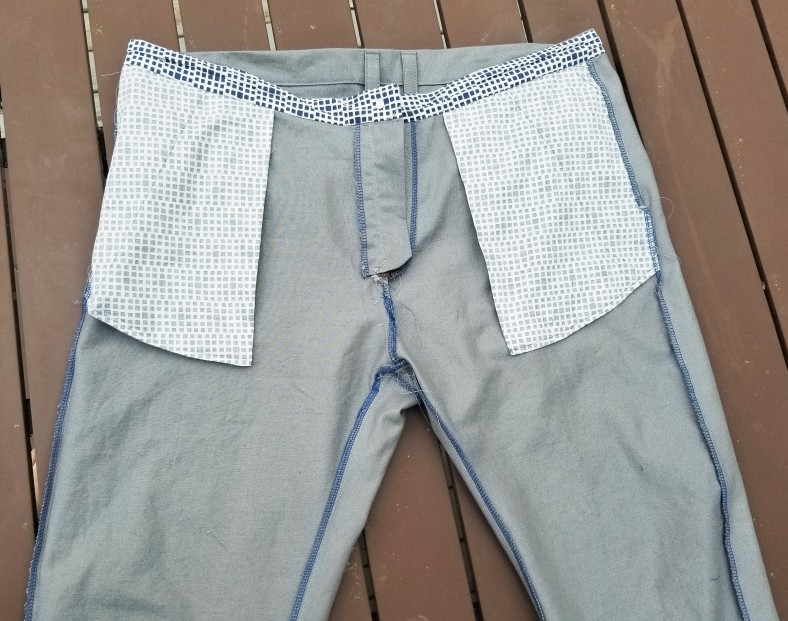 Otherwise known as “whelp!” pockets. Well, nobody said this was going to be an easy sew. I was heartened to see that there was an in-depth tutorial for this part on Ottobre’s website… until I looked at it… all 8 photos of it. No, seriously, it’s actually very clear, but not quite enough for me, so I went back to the Gentleman’s Wardrobe book to supplement it. It turns out I’ve been making welt pockets for bags for a while and didn’t really realise, so this part was actually okay. I misjudged a couple of finishes by a tiny margin, so they’re not perfect by any means, but I feel I can get a lot closer to welt pocket nirvana next time.

Ottobre has you make up the fly front zipper at this point in proceedings, and refers you to another tutorial. This one actually was too brief to be clear for me, and, in any case, the exact tutorial they recommend wasn’t on the website for some reason. Nice! Instead, I used Grainline’s fly front zipper tutorial and found it really clear – although I thought I had remembered to reverse the instructions for the male trouser, but… it seems I didn’t. The other half has been grumbling about it already, but I told him there is no way I can humanly change it and so, you know, just BUTTON them the OTHER WAY. Jeez. 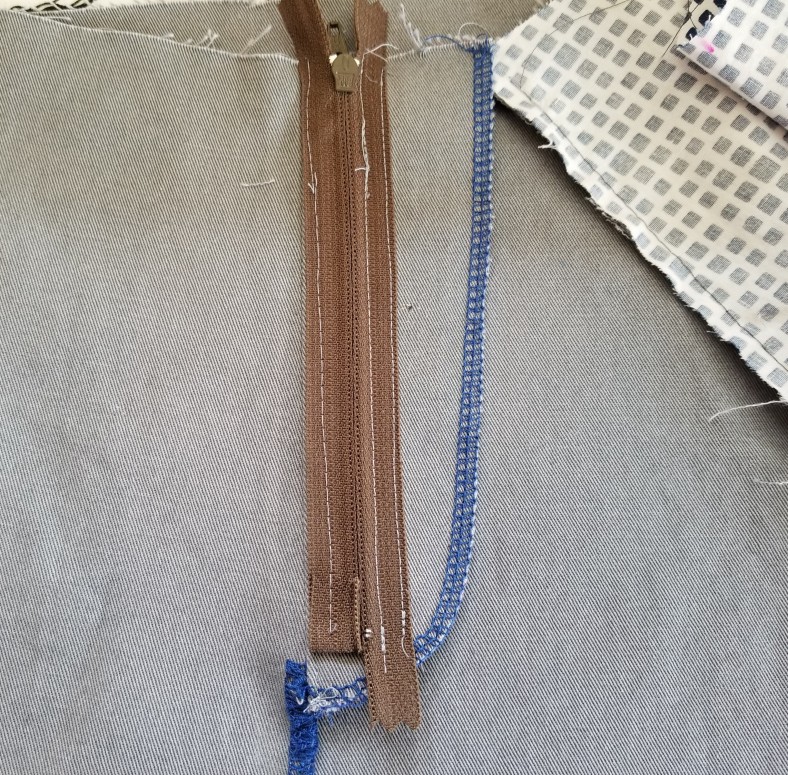 I did, nevertheless have one major problem, which stemmed from that missing tutorial. In that elusive Ottobre tutorial it must have instructed you to stitch the crotch seams together right at the beginning of the instructions. All other tutorials start after this point, but I didn’t realise. So I made the fly front up, including topstitching, only to realise I should already have sewn the crotch seams shut. OOPS! Big OOPS. There was no way on this earth-encrusted, sea-drenched planet that I was going to redo all that, so I wrangled and teased my seams into place around the crotch, sewed and crossed my fingers. I think I got lucky actually, (and it did result in a couple of extra bar tacks…) but I wouldn’t want to do it again. Curses, Ottobre!

I basted the trousers fronts and backs together and did a test fitting. As mentioned, they were too big! Not a terrible fit, but just a little too big everywhere. So I basted the crotch and inseams at 5/8″ and the side seams at 1/2″ (the recommended seam allowance is 3/8″) and we tried the trousers on again. Much better! Still not perfect, but the leg shaping was better and it didn’t hang off the bum so much. I should probably note that the fit of these is more slim-fit European. I feel like the American style of chino is a bit looser in general, but my husband definitely prefers the former. The waist still seemed a tiny bit loose, but I left it as was and figured I’d take another look once the waistband was on. I ended doing the side seams at 5/8″ too with the final sew, so maybe that was an eighth too far. Still, it’s pretty good for a first attempt and quite flattering I think.

After adjusting the fit, it was a matter of finishing off the belt loops, waistband, hems and button. I wasn’t entirely sure what the belt loop instructions were asking me to do, but now that I’ve seen these photos I can see I need to sew the bottom of the loop to the waist area as well – they’re hanging a bit loose and free right now, although they’re very secure. I did like the method of attaching one end of the loop to the raw waist edge before the waistband goes on. It means the belt loops are trapped under the waistband, and this makes them very secure. No chance of one falling off as happened with my Morgan jeans.

The waistband actually went on rather nicely, which was a relief, as this can be a problem area for me. I edge-stitched from the right side as directed, and it looks nice there. I don’t care if it’s a little off on the inside! I didn’t topstitch either the waistband or the belt loops. I was happy to do either, but my hubby was cool with the slightly more minimalist look of normal thread. The topstitching for these chinos was mostly confined to the pockets, fly area and leg seams. It’s entirely a matter of preference though, of course! 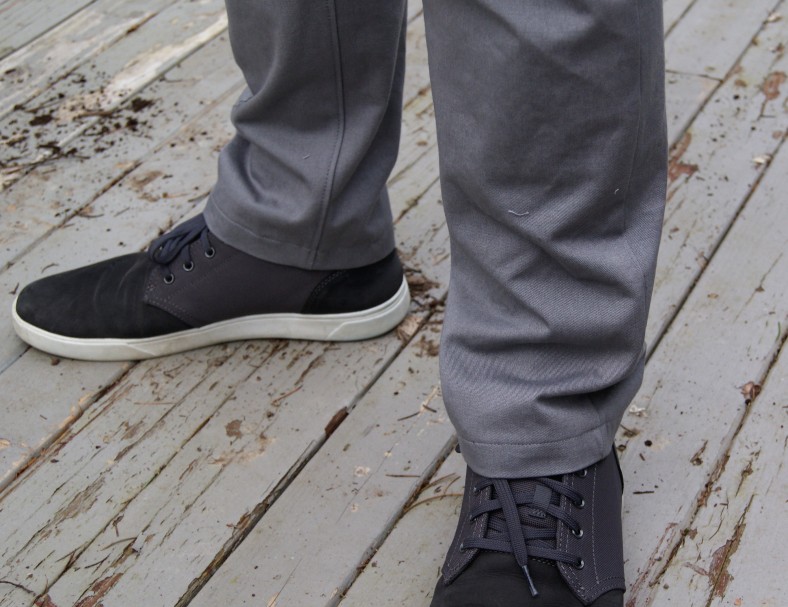 For the button I used a jeans button I had in my collection (definitely one of the more “manly” ones – ha!) and I took about 3 inches off the length, before hemming at an inch. As I said, my husband’s legs are proportionately shorter than his torso, so this was to be expected (he is 6 feet in height for reference).

Overall, I have to say these turned out better than I was anticipating at the halfway point. Doesn’t that happen all the time in sewing though? It definitely does for me. It took me a while to make them, but that was more due to a busy period at home. It was so bitty, it’s hard to estimate how long they took, but it wasn’t too bad. If you have the time, I think you could knock them out in a weekend. He seems to be happy with them, so (I suppose) that’s what counts. Right? He’d better stop going on about that reversed fly though… mutter… mutter.

All in all, another well put-together pattern from Ottobre – I already subscribed to the Family magazine, so I’m getting excited for what’s in the next edition. In the meantime, I have a ton of other sewing to catch up on, so talk to you soon!

When Bad Things happen to Good Dresses Part 342.
I had an idea for a fabric/pattern pairing buzzing around in my head and couldn't let go of it, so here we are. One of the things I love about quilting so far is that I get to putter about with colours that I wouldn't wear and/or don't suit me. That's really fun!
New blog post up now on my two Elsie skirts. Here are a final couple of upright pics of View A. This view has a fully elasticated waist, deep pockets and those two little front slits. This one is swishy heaven for anyone, like me, who enjoys sashaying their way through the day.
Here's View B of the #elsieskirt from @anna.zoe.sewing. As you can see, this one has a button placket and I also left it a little longer on my 5'6" frame (it's drafted for 5'8").
I don't often post pictures of me seated; partly because I can look like two watermelons on a pair of lolly sticks, but also because I normally forget. My photo sessions habitually comprise some "Hurry uppppp it's going to be dark in 5 minutes", followed by minor squabbling and some deep sighs. Interesting positions don't normally enter the fray, unless you count fist-shaking.
I made myself a quilt design wall! Joann is selling wide, wide felt on sale for $3.99 a yard and I only needed 3 yards to more than cover my wardrobe doors.
Loading Comments...
%d bloggers like this: