No, I can’t say Nixie “panties”. I hate that word. Almost as much as I hate the word “moist”. And those two in the same paragraph practically brings me out in hives. Bleurgh. Anyway, I digress. This post is somewhat overdue as I tested these pants last year! I actually thought I’d already posted it, but discovered it in my drafts the other day. I know it was on hold because there were a few little tweaks to the final pattern and so I wanted to make a few pairs before writing a final summation. 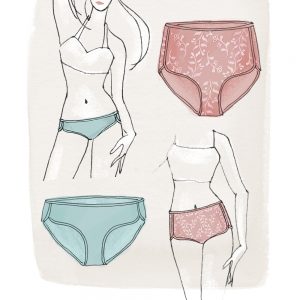 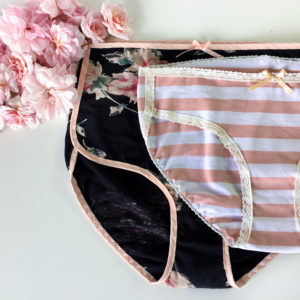 The Nixie Briefs (to give them their official name) from Jennifer Lauren are described as “a step above your standard underwear fare – with a higher rise at the back and full bum coverage, they’re your new everyday knickers with a fun twist. Update your undie drawer, safe in the knowledge that plumber’s crack, hungry bum and drab undies are a thing of the past.” And I’d say that’s a fair description! These are two versions – a hipster/standard pant style and a high-waisted version. The latter look, – well there’s no other way to say it, – HUGE when you first make them up. But these are intended to be comfortable, feminine pants and having now worn them for a few months, I can tell you they hit the mark.

I made my initial tester pairs in some fun scrap cotton lycra and FOE, since initially there were only instructions for this elastic attachment (there are lingerie elastic instructions now too). I had a little trouble finding FOE and ended up buying some from JoAnn Fabric that I think was more intended for diapers and was rather too stiff for both my and my machine’s tastes. So I subsequently had a good hunt on the net and came up with Mary Supplies on Etsy. They have a great selection, it’s a LOT cheaper and shipping was really fast. There are plenty more online stores I’m sure, but I had a good experience with this one. 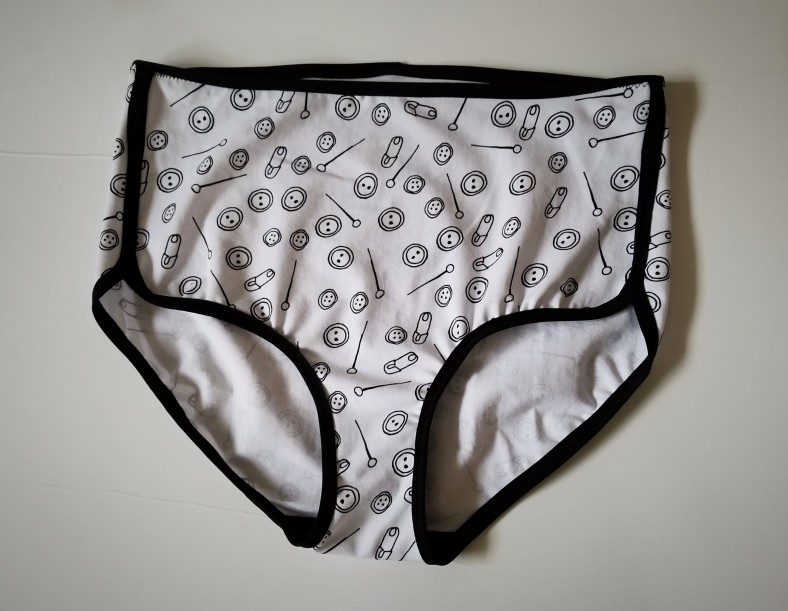 As with all Jennifer Lauren patterns, the instructions are extremely thorough and I feel she has a nice way of explaining tricky techniques to beginners. Undies are a great way to use up pieces of scrap fabric and for these you need a recommended minimum 30% stretch and ideally (but not necessarily) four way stretch, so many knits will fit the bill. You also need a scrap of breathable gusset (shudder) fabric and the aforementioned elastic. Not much!

It’s a very simple matter to tape the small pdf pieces together and cut out your fabric. It’s then just a couple of steps to sewing your pieces together before the lingerie elastic/FOE finale – because that’s the bit everyone dreads isn’t it? It genuinely does just involve finding a technique that you – and your machine – are comfortable with. I found my machine was chewing up my elastic a bit to start. I fixed this by putting on my walking foot, and giving it a little manual help to get going (i.e. tugging it). I also started off sewing a little from the end and going back and finishing this little piece after – this helped immensely too.

After I received the final pattern I made another couple of pairs – the larger in cotton lycra again and the smaller in cotton jersey this time. I also decided to use the new thinner FOE for the large briefs and some lingerie elastic for the standard pair, with the new instructions.

The sew went along nice and easily after the practice pairs and I used the tricot stitch for the main elastic sewing and lightning stitch for everything else. My machine definitely liked the thinner FOE much better, although I wish it were just slightly wider.

These really don’t take long to knock up once you find a rhythm sewing your elastic and I’ve now been wearing them for several months and can tell you they’ve held up perfectly in every sense of the word. Alright, look – if you’re a thong wearer, they’re not going to be your thing, but I like a bit of support and the fun fabric by and large keeps the larger ones out of Bridget Jones territory. There are some lovely pairs in more classic lingerie fabric too, if you search around.

To summarise, this is a great pattern for lingerie beginners to get their teeth into and you’ll get some very wearable knickers out of it at the end!