Yes, it’s a bit of a fail, this one, but I have to qualify that by saying it’s not going in the scrap heap quite yet. Let me tell you what happened:

It got hot. It got hot EVERYWHERE this July and I happened to spot this pattern in Joann Fabrics on a swelteringly breezeless day and thought to myself “Doesn’t that chick on the pattern front look deliciously cool in her light flowing dress… it doesn’t look like a tent on her though (remember this part – it’s important later)… hmm, it’s not my usual style… but yes, I think I’ll give it a try”. I was kind of sold by the red dress fabric if I’m honest, which is of course a very BAD reason to buy a pattern. Also the fact it says “FAST& EASY” right at the top, with little racing car lines to hammer in the point. 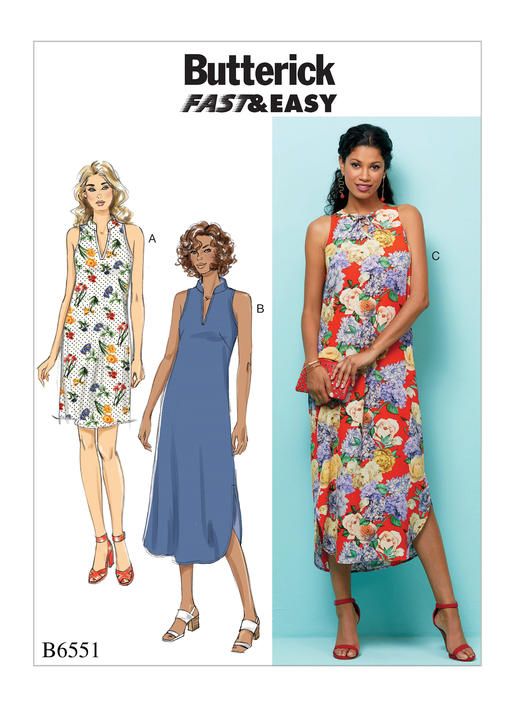 And you know what? Some of those things were true. It actually is a pretty fast and easy pattern. I went for View B and decided to make a wearable muslin, as is my wont, out of this blue ikat rayon challis I picked up a while back from Pacific Fabrics. It falls into the “deliciously cool” category, but I don’t absolutely adore the fabric pattern, so I figured if everything went horrendously wrong, I wouldn’t be crying myself to sleep at night. 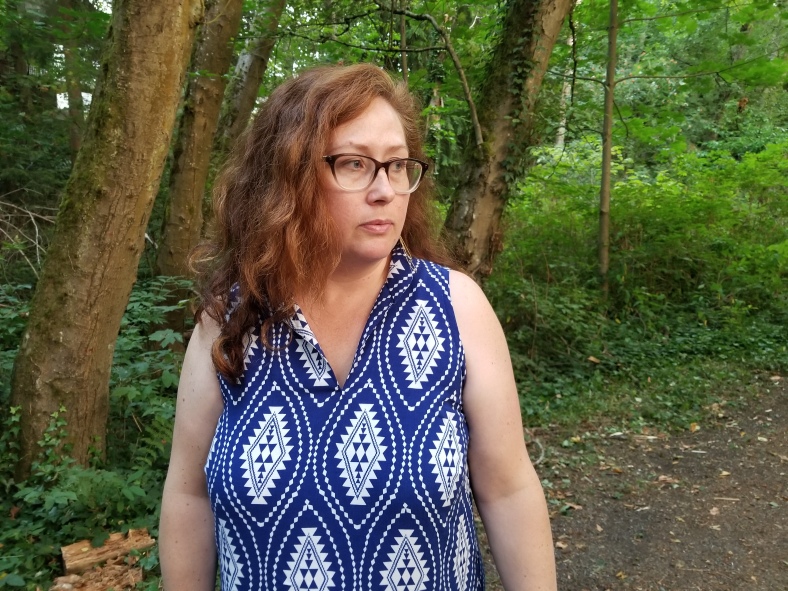 First things first. This is a Big 4 pattern and it describes the dress as “very loose-fitting”. Warning! Warning! My measurements put me at the lower end of XL, or a 20. I decided immediately to go down to a L, or 16-18, based on my knowledge of Big 4 ease. This was a GOOD decision. As you can see, there’s still plenty of room in this dress – and let me tell you, there’s even more room than what you see in the photos. 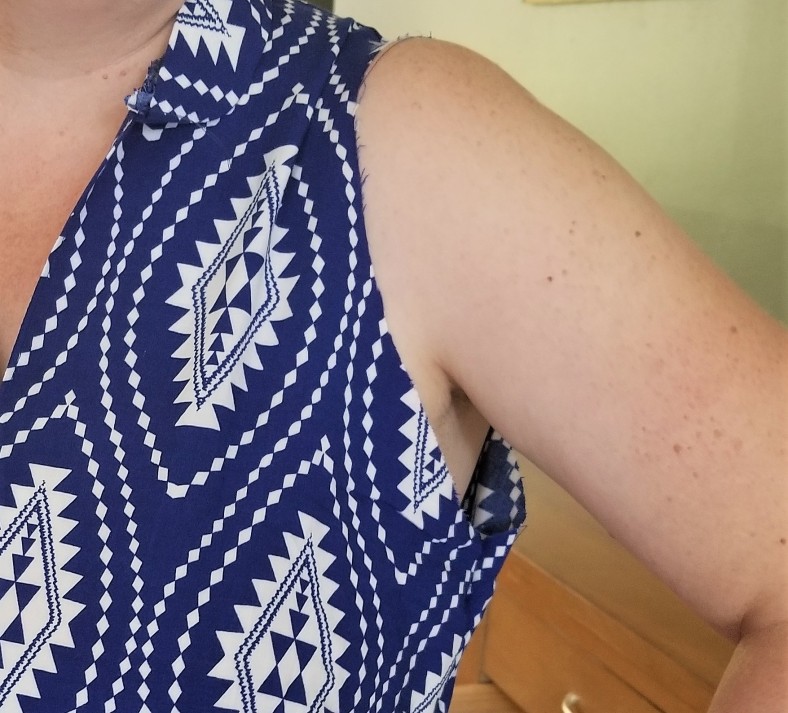 When I got to the point of the first fitting, the armhole area was huge! Very wide and extended down my side. This has happened to me before, so it could also be a fact of large bust on medium shoulders and arms, but even so… I adjusted it by sewing a dart shape in the side seam of around 3 inches long and maybe 1.5 inches wide. Yep, three whole inches. Whew! The orange is the original seam; the yellow is my new seam. It’s probably not a very technically accomplished way to fix it – but it did. it fits much better now. I also lowered the bust dart by an inch (in fact I just rotated it since it starts off low anyway), but this is a common adjustment for me. 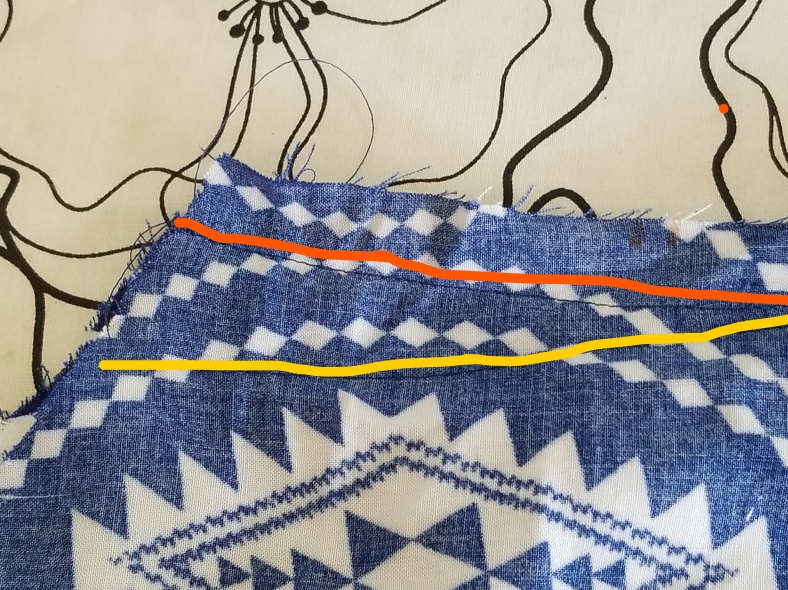 The one big reason this dress is a fail, however, is nothing to do with the sizing, but entirely down to my own sloppiness. Have a look at the front V opening. You’re probably noticed already, but see what I did? This picture below makes it very clear. I was quite proud of myself for managing to cut the slippery rayon challis pretty straight. But then I managed to cut the slit at a 20 degree angle! ARGH! You know, there are a lot of things that don’t bug me with sewing that might bug other people. I just forget about them and forgive myself. But this. This BUGS me. I think what actually happened looking back at my pics is that I got distracted by the pattern on the facing piece and lined it up with that, even though it bore no relation to my front body piece. Yes, that’s probably it. 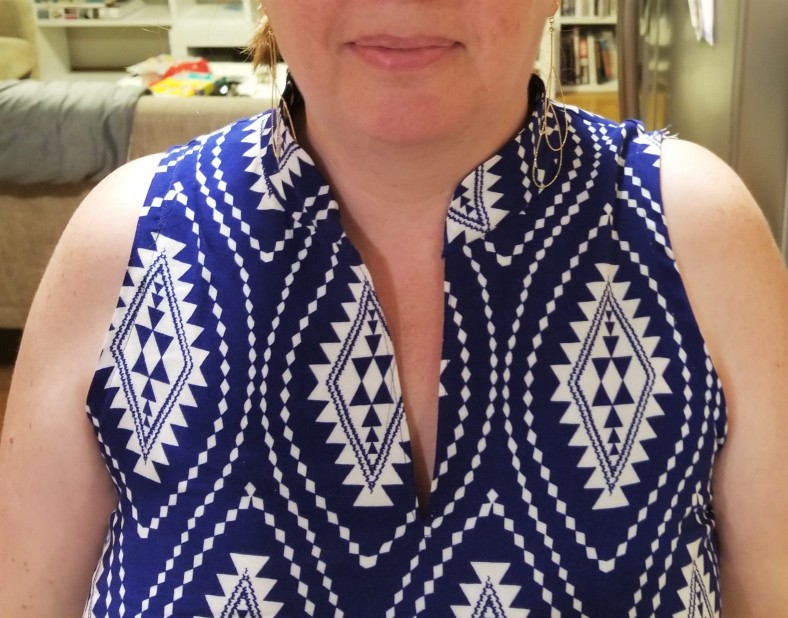 Well, once I noticed that, I have to admit my attention to detail got a bit more lacklustre and so my handling of the hem and so on isn’t my best work. As it turns out, the collar tends to flip back on itself in any case, but I was planning to wear the collar turned back to dilute the placement issue, as you can see in the other photos. 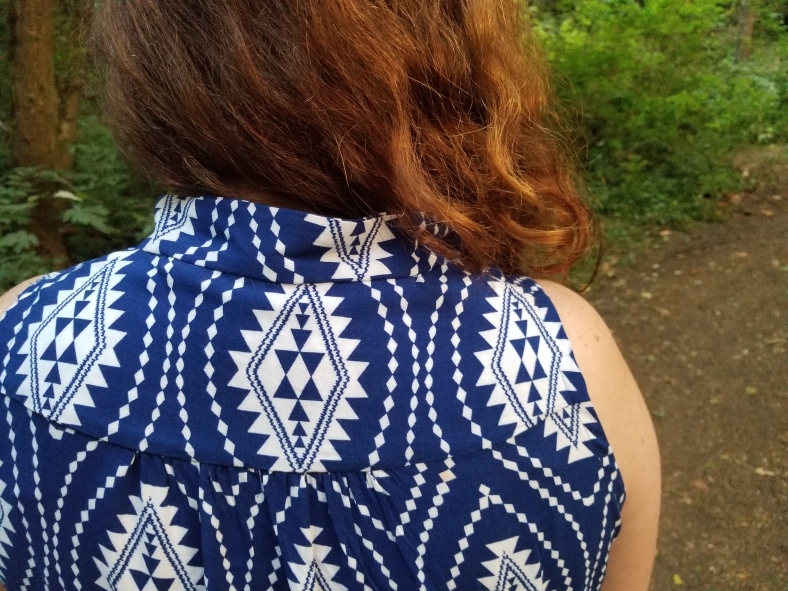 Having said all this, there are aspects of the dress I very much like: I like the gathered yoke at the back – it gives the dress some nice movement as you can see below. 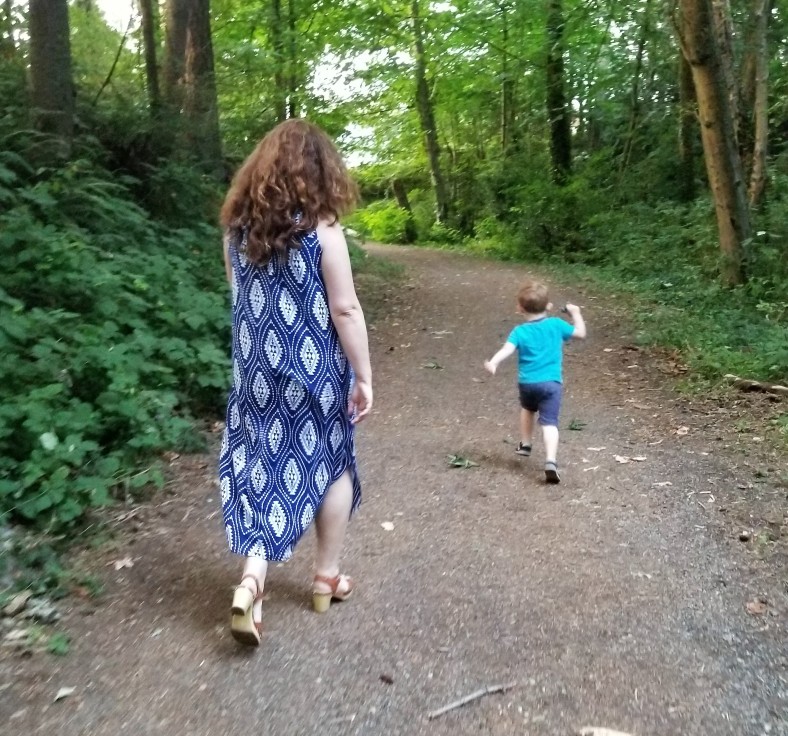 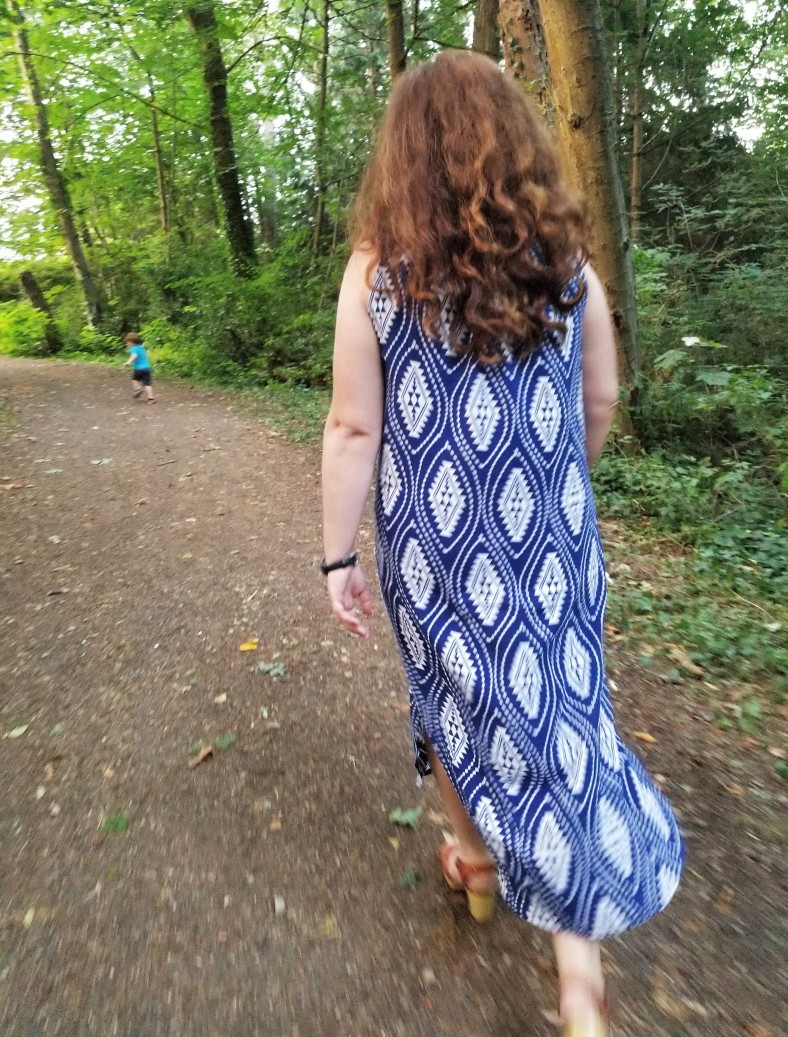 The movement of the dress is generally a nice feature and this is compounded by the fact I used rayon challis. I like the scalloped side hem at the legs. I also like that the armholes are cut in at the shoulder – it’s quite a flattering shape. 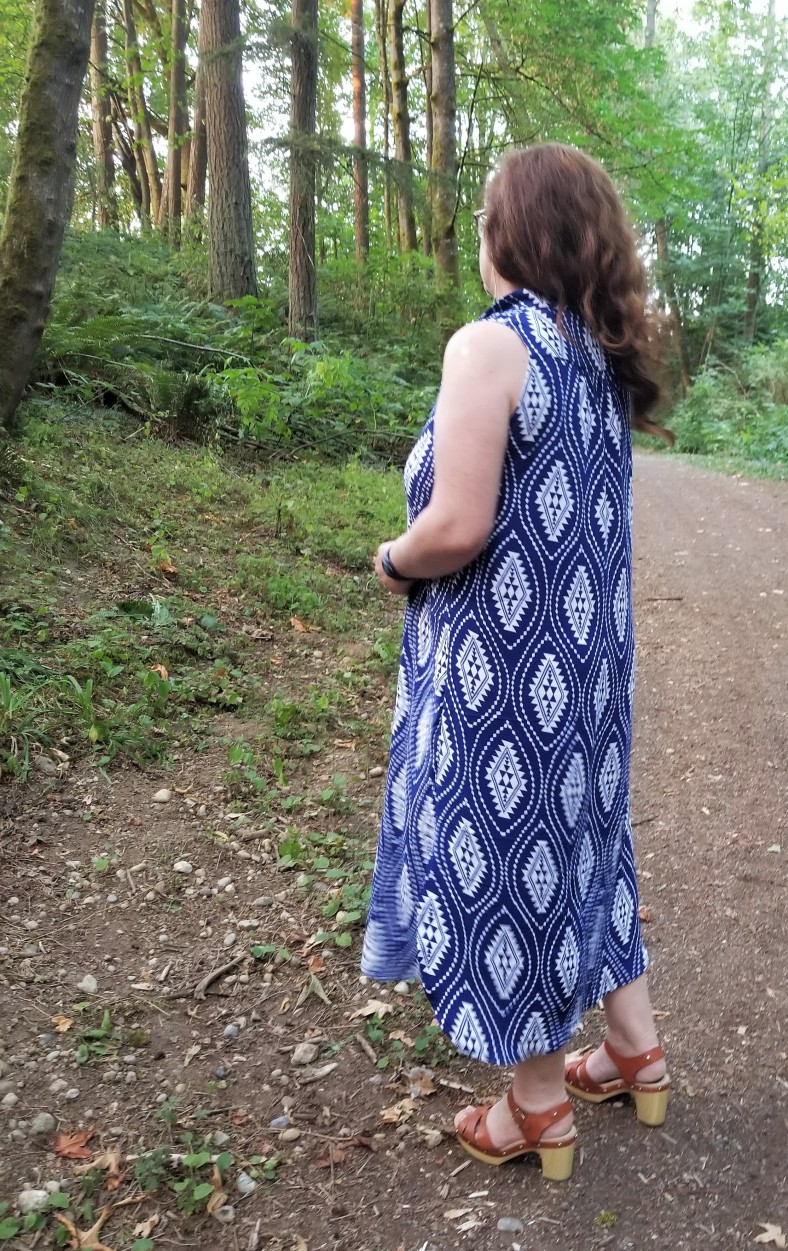 And the reason for saying at the beginning of this post that the dress isn’t going in the scrap heap is because there’s no denying it is a very comfy, cool dress. In terms of how it feels, it’s actually exactly what I was hoping for. So I will, no doubt wear it, even if it’s only around the house. 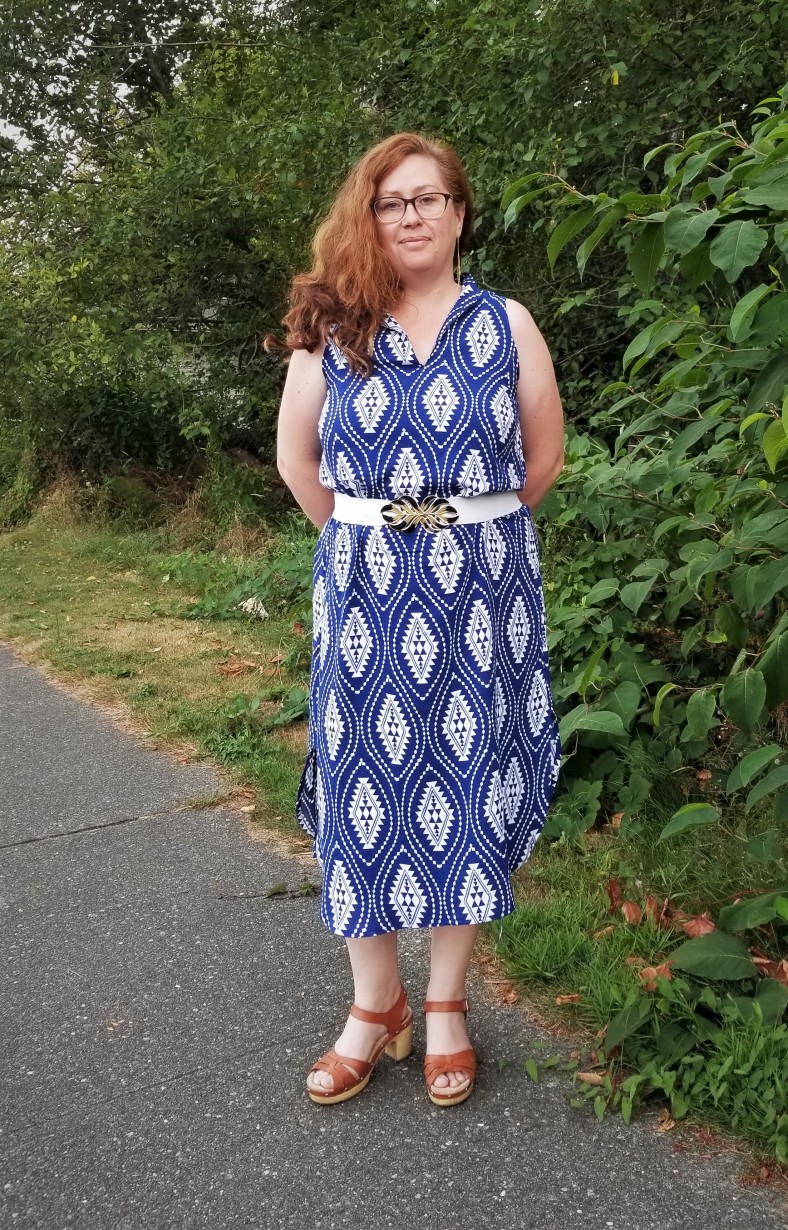 Ultimately the thing about this dress is that the way it looks is just not really me. Some people will probably like it on me and others not so much, but it just doesn’t feel like a natural garment for my style. I did try it with a belt and while I think that does make it more me in terms of shaping, it takes away the whole reason for making this dress in the first place – to have a breezy wind tunnel of a garment for those unbearably sticky days. 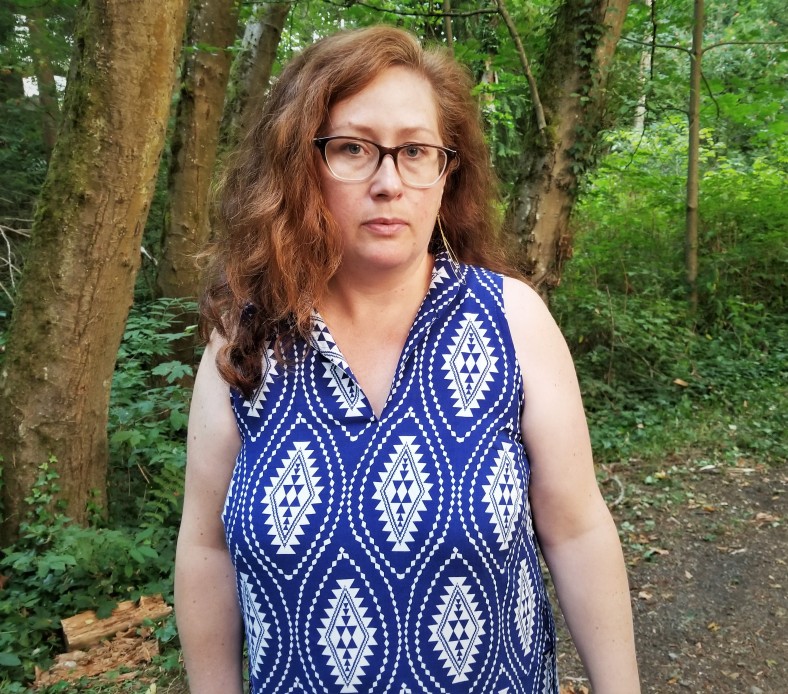 Oh man – as I write this, I just know I’m going to be back in 6 months saying “Remember that blue rayon challis dress I called a fail? I wore it like 4 days out of 5 allll summer!!” Doesn’t it always just turn out like that? 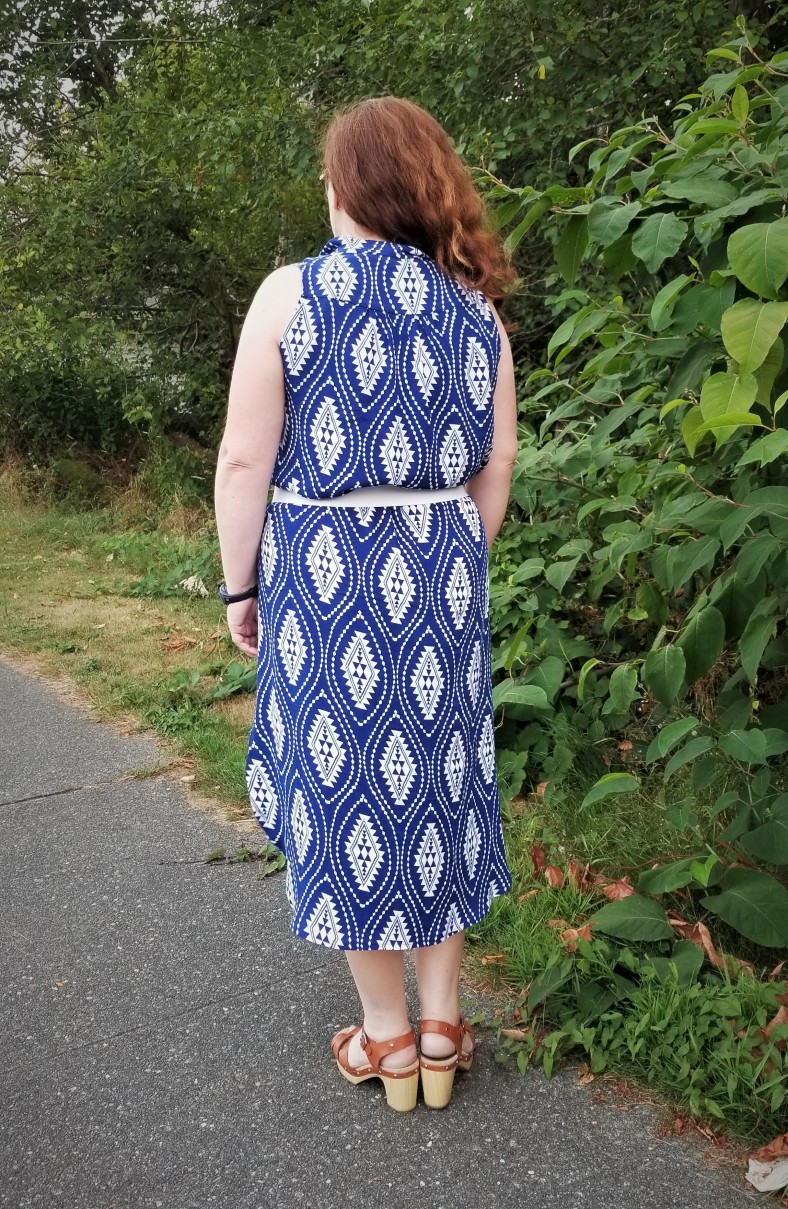 Anyway – there you are. A semi-fail then, but if you know already you DO like this style of dress, it’s a fast sew. Just watch out for the sizing and armholes – and interface the collar well if you’re using a floppy material like mine, or you too will be the proud owner of a droopy mandarin collar, perfect for hiding massive errors… until next time!