Hello chaps! Thanks for all your lovely comments and feedback on both the Alexandria peg leg trousers and Butterick B6551 dress I made recently. I called the Butterick dress a “semi-fail”, but have managed to wear it plenty since I made it, so it worked out ok in the end! We sewists can be pretty tough on ourselves, but I usually only point out errors in case it helps anyone else avoid making the same dumb mistake, or helps people with a similar body shape to mine decide if they want to make the garment or not. I don’t really beat myself up about it other than thinking “Huh, that’s a shame” – it’s all part of the learning process, right? But it sure is nice when people reassure you! So thanks. 🙂

Anyway, all this preamble is really because I’m kind of lukewarm on this project too, haha! Let me say up front that I half expected to be lukewarm because of the slightly boxy shape, but I was really interested in the Seamwork Kristin top with its unusual design, and I wanted to try it out from a mechanical point of view. I gather this style was quite popular back in the sixties, and it comprises a wrap-style tank with an interesting three-armhole design. It has “bust darts, a relaxed fit, and a slightly cropped length make for a flattering fit for both misses and curvy sizes” according to Seamwork. What this means is you effectively make a front, a back and then another half-front and half-back and sew them all together. Then you wrap it around yourself and the weight, plus a snap, holds it all in place.

So I know from previous experience that the armholes in the new Seamwork block are too low for me, so right away I added 1/2″ to the armhole height by redrawing the lines. I also lowered the bust dart by an inch, which is a fairly typical adjustment for my big ‘ol bust. As you can see from the pics, the armholes are fine, but certainly not too high, so I’m glad I raised them. I think if I hadn’t my bra strap would probably show.

I decided to use this pink rayon twill in “solid rose” from Style Maker Fabrics here in Washington. I bought it at the Sew Expo event in the spring and it’s the sort of fabric I absolutely had to touch firsthand in order to understand it. It’s medium weight with a lot of drape and has that cool rayon touch and an almost suede-like sheen. It’s really lovely to wear and I thought the weight might aid in keeping that loose back piece in place. I made a size 14 by the way, and only had 2 yards of the twill, but it’s around 60″ wide, in keeping with most rayons. 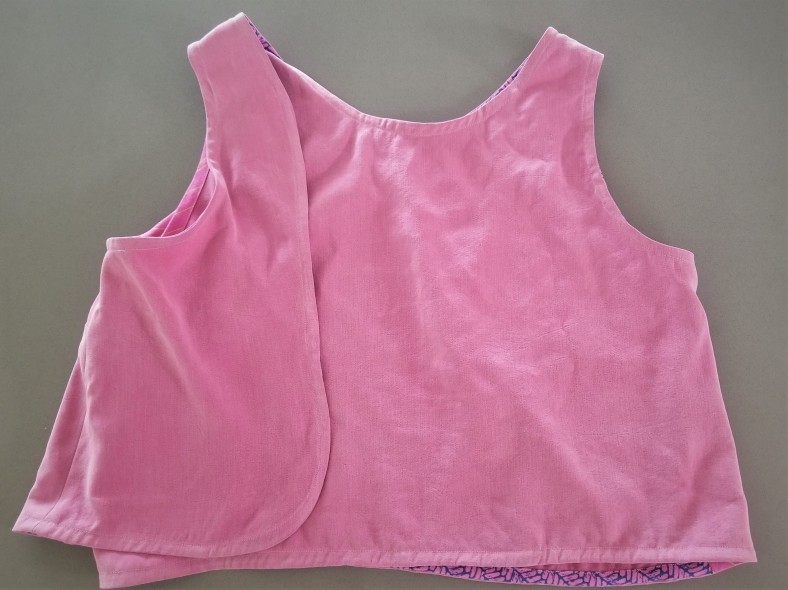 The construction of the top is really pretty simple, but because of the wraparound nature, it looks quite different to anything I’ve made before. And if you don’t like finishing edges using bias binding or tape, then LOOK AWAY NOW. No, really. I mean it. because this is what you do:

Yes, I know. That’s around 5 or 6ft of binding just so you know… there are THREE ARMHOLES, you know… In all seriousness it doesn’t take that long and the rest of the top is very fast to zip up. I was quite pleased with myself because I had some self-made pink binding lying around from another project and was rather satisfied I could use it up here. Except then I ran out, went to make some more and realized I’d taken the other remnant of that fabric to a recent fabric swap. DOH! So that’s why there are two different types of bias tape on this garment and I actually quite like it! 😀 Nobody sees it anyway.

Anyway, since the rayon twill was wide, I still had a fair bit of fabric left over after cutting out Kristin. What I really fancied making were the Heidi skorts (I really hate that word though: “skort” urgh) with the Heidi bonus download piece, but unfortunately my fabric didn’t quite stretch to that. So I made do with the Heidi shorts, which are high-waisted with pleats and an invisible zipper. There are no pockets, which is a bit of an inconvenience when it comes to shorts, but I do think they would have ruined the smooth line of the rayon twill in this case, so it was probably a good decision not to add them.

I made a 14 again and the muslin fit me very well. Unfortunately that muslin was made 6 weeks ago after my triathlon and I have done very little exercise and eaten my own body weight in ice cream since then, haha. So… the shorts are a smidge tight it must be said. They’re not bad! I need to add a little in the crotch rise, which is again a regular adjustment for me and also a little in the hips. But I think once I settle back into exercise again, it will right itself.

My main complaint about this outfit on me is the length of the top. It’s supposed to be a cropped top, but it’s not really very cropped. I feel like it’s at a “neither here nor there” point and, unfortunately, with all that binding finishing the bottom, it’s not a simple case of chopping and re-hemming either. I was hoping to be able to wear it with my Beignet skirt, which is high-waisted, but it really hits at the wrong length there. On the plus side, I was expecting to DETEST the side view, and actually, I don’t mind it too much.

The back view makes me look like I have a slight bum wedgie, which is not the most flattering view (!), but a little ease should help there. I never thought I’d post a pic of myself online with a bum wedgie. What indignities I suffer for my art. They do look very like the shorts in the Seamwork model picture though – maybe she has a bum wedgie too. 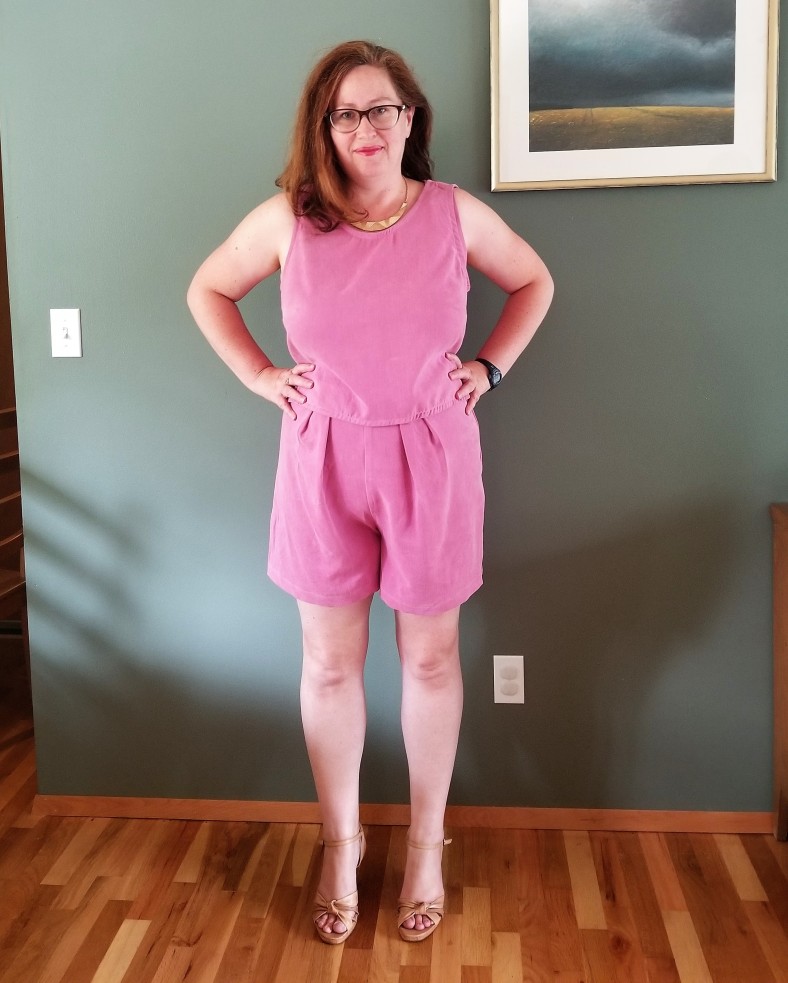 I do absolutely adore the colour and I’m not a girly girl at all. But it’s a slightly dusky rose in real life and matches my skin/hair tone quite well. I tend to go for silhouettes slightly more fitted at the waist, as in the pic with my hands on my waist above, but it’s definitely one of those projects where I was like “Oh noooo” and then I saw the photos and they weren’t so bad. It’s weird how that happens isn’t it? And vice versa I have to say!

What else can I tell you? The shorts construction is also pretty straightforward: sew and iron the front pleats and back darts and then sew main body pieces together at one side seam and the rest. Add the waistband and then the invisible zip. Hem. Badda boom. I really must buy an invisible zip foot some time. My attempt was passable, but I feel like it would make me happier. One for the Christmas list perhaps.

Would I make it again? I’m not sure to be honest. I think I would need to crop the top significantly and go down a size. The shorts are quite nice, but they’re pretty dressy with the invisible zip and the truth is I think I would get more wear out a pair of Alexandrias. They really fit me well  (they also have the pleats) and are a bit more casual, with pockets. But I do think this ensemble will look amazing on some people.

I lost my whole blog post on this DP 004 batwing top Friday night right before I published it and there's nothing more $%&^%$# than that.
1/2 I have a lot to say about this latest project, so let's start with this pic! It's Le 004 from DP Studio and it's the first of their patterns I've completed 100%. I have quite a few of them but haven't had much joy with so far: the first was a dud for me (I will post it soon as I note I haven't put it on Instagram yet) and I lost steam with the other; I occasionally take it out, look at it for a while and then put it away for another day, gently sighing.
Outfit in the wild! It almost felt like normality today, going to a real life art exhibition. This is my @namedclothing #reetadress and @atelier_to_naniiro_textile linen coat at the current Monet at Étretat exhibition at @seattleartmuseum. Small but perfectly formed, the wow factor when seeing the main paintings was high. Photos obviously don't do them justice, but Monet really was a fully technicolour bearded behemoth of the 19th century. So beautiful and absolutely worth a look if you're in the area.
Blog post up now on my #seamworklarkin bomber with a little tutorial on exposed zipper pockets and the ruffle I added. Here are a few pics of the details, including that lovely bemberg rayon lining, which makes wearing it feel so dreamy.
The new Seamwork patterns are out and this is the Larkin bomber jacket, which is designed as a gender-inclusive pattern. Very cool. I decided to lumber it up with some plaid wool from the stash, but added a fun ruffle to the front as well as exposed zipper pockets instead of the welt pockets as designed. I like a welt pocket with the best of them, but I've done a few recently so felt it was time for a change.
Quilt No. 3: the Halloween edition. I'm genuinely not sure what to post for quilting projects. With garments I always want to see the garment on a body or a detail, so that's what I try to post. Not so sure about quilts. I guess it boils down to what you want to highlight, so I've started with the thing I'm most proud of and that's my first free motion quilting on the Ol' Brother CS6000i!
Loading Comments...
%d bloggers like this: