Bit of a mixed bag, this one. It’s another new shape in a way, but I only just this minute realized, while writing this blog post, that it’s actually very similar in some ways to the Bridgetown dress by Sewhouse 7, which is a very nice dress, but doesn’t suit my shape at all. That is: there are no bust darts and it has a high, elasticated waist with wide one piece sleeves. However this Vogue dress also has a back overlay that wraps and ties at the front, which I figured would give me that extra shaping that I like for my figure. At least that was the plan…

There are lots of good things about the V1395 dress. I love the colour and the fabric, which is a red double gauze from Cloud 9. It’s lovely to wear and it was actually no problem to sew after I attached the old walking foot – that made all the difference. It also has some really nice features, like the gathered back neckline and the overlay tie.

Nevertheless, I feel it’s a little harder for me to judge Big 4 patterns in terms of ease and sizing and so I looked up some reviews on patternreview.com. Most of the reviews mentioned that the armhole was way too low, so I immediately added a whole inch to the armhole, since I sometimes have that issue on patterns where people don’t mention it as an issue. And I’m glad I did, because it’s still fairly roomy. If I hadn’t I think you would have been able to see right through to the other side, which was a problem for a couple of unlucky sewists. 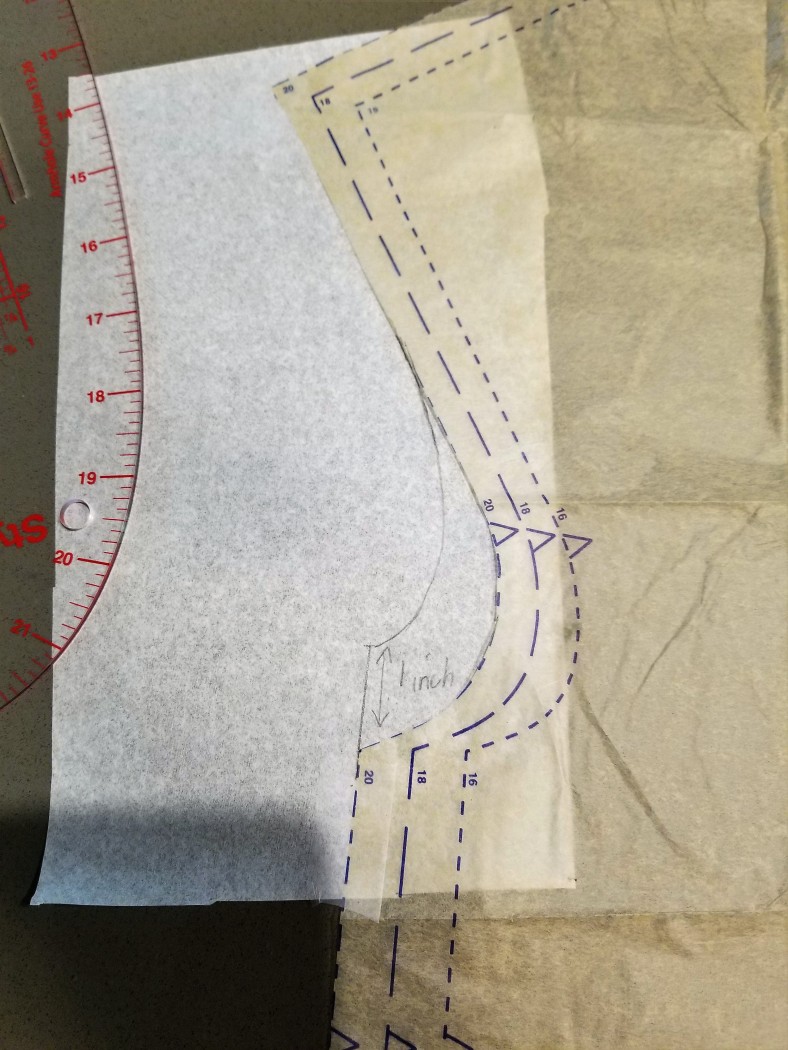 The other main issue that was mentioned on a frequent basis was that the neckline was too wide. And, readers, I am here to tell you that it is. I did a little tissue fit and thought “Meh, it doesn’t seem too bad”, but, ultimately, I should have made a muslin, because it is indeed way too wide, as you can see below. It doesn’t quite make the dress unwearable but it’s really close. I’m hoping that when I wash it, the double gauze will shrink a little and help address the issue, because, unfortunately, the width does throw everything out. The dress starts slipping backwards a little and the waist starts creeping up… it’s a shame really, but all my own fault. 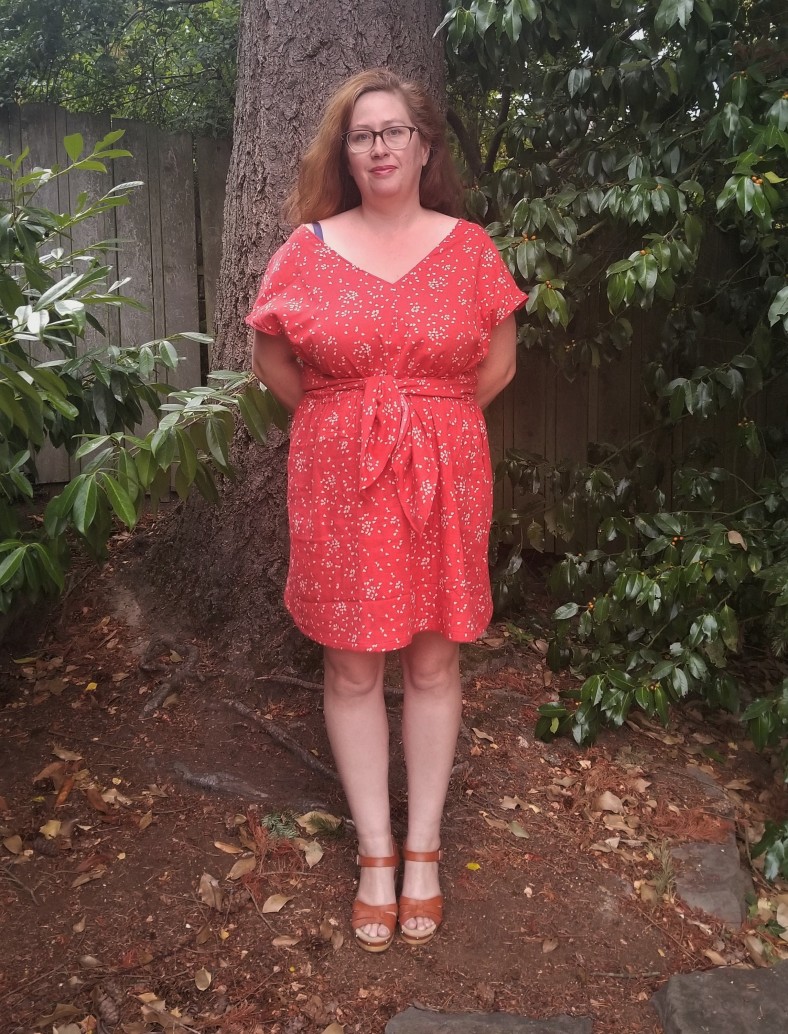 I made the size 20 which is my “starting” size with Big 4, but I should have made an 18 or even 16. There is plenty of give in the waist with the elastic and the top front is just too oversized for my shoulders and bust/ribcage. My breasts look like two marrows in a sack from some angles. Sigh. The waist-defining effect I was hoping for from the ties doesn’t really work out too well, and mostly because the ties are a little high, but also because the multiple layers create quite a wad of fabric there = not slimming. 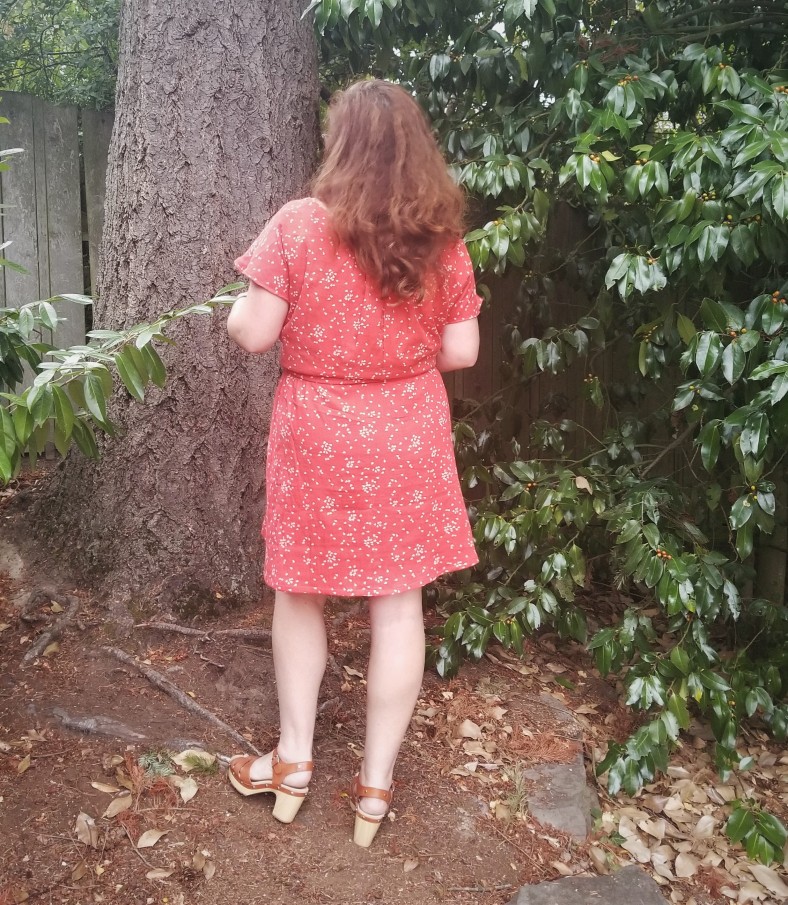 One thing I should also mention before I forget is that a fabric which is the same on both sides might be best to use for this dress. I missed the little note that said the overlay ties actually show the wrong side as well and had assumed they would be sewn in half and turned out at some point. Oops. The problem was compounded by the fact that I had to piece one of the ties together, so it’s really pretty ugly on the reverse. It’s quite easy to tie the wrap part in a way that doesn’t show the underside too much, but just something to bear in mind when choosing fabric. 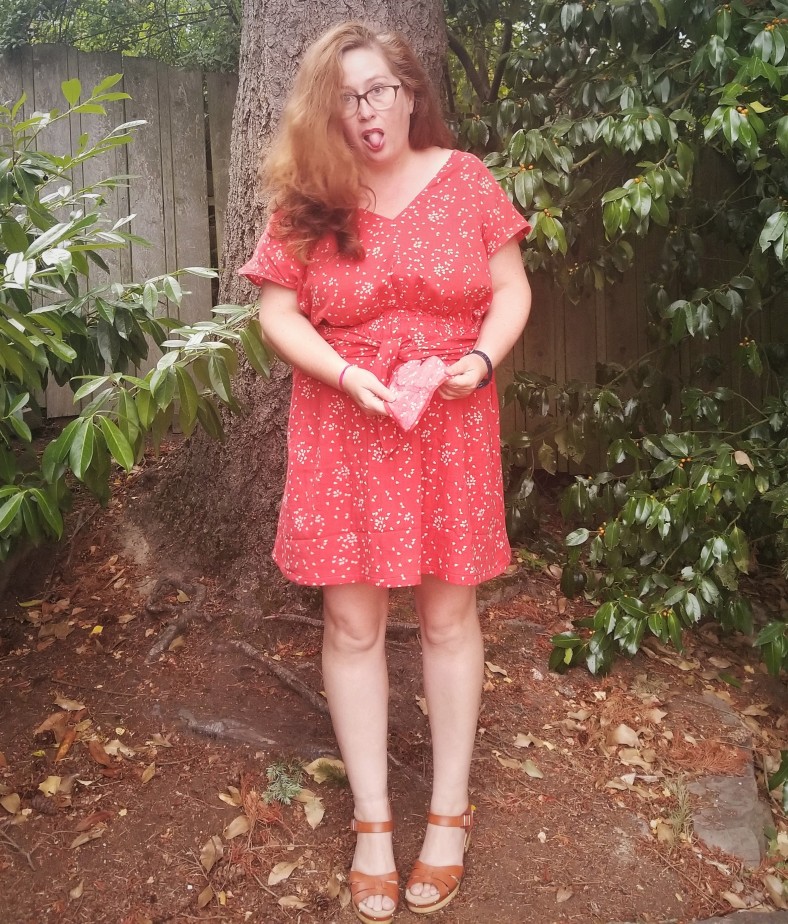 Having said this, I actually did really enjoy some of the construction. There were a few new techniques I hadn’t dealt with before. I was already a bit trepidatious about this project because it’s a Vogue pattern and a Vogue designer pattern at that. I’ve only made one Vogue pattern so far which was “VERY EASY” and it would still have been an intermediate pattern for most indies. I glanced at the instructions for this dress and while they’re not crazy difficult, they are more involved than a cursory glance at the pattern picture would suggest. 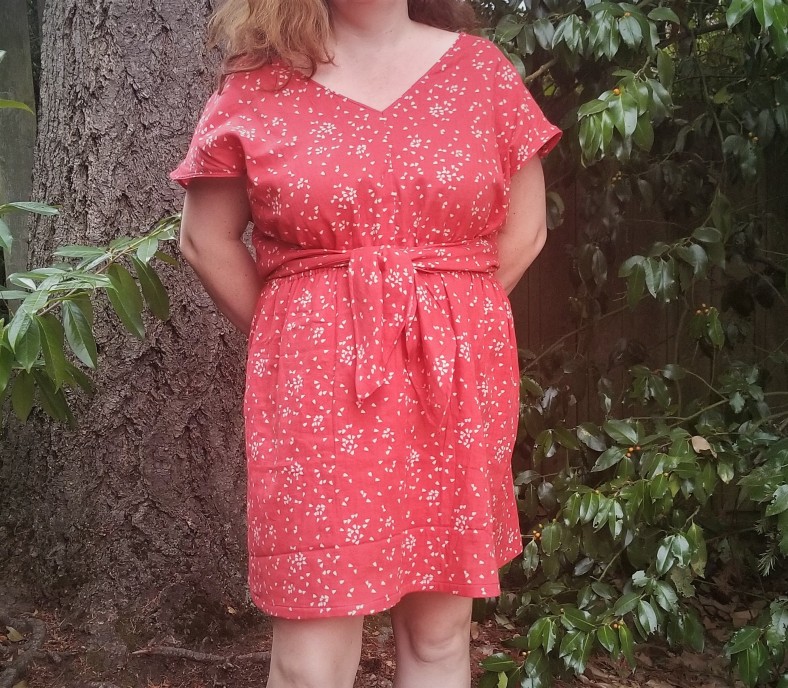 Example: The first thing you do is finish the neckline with two separate facing pieces. You attach them much like a binding on a t-shirt, but because you do so, I had it in my head you would fold them over and end up with a thin band, as on a tee or sweatshirt. However, I realised this left me with a raw edge, so I looked back at the instructions and then realised that it was in fact (as it had only ever said it was, to be fair) an actual facing that you fold all the way to the inside, baste and then topstitch from the front. I have done this before to some extent, but the difference here was that the margins were tiny compared to what I was used to. There was about 1/16th of an inch margin of error and, not being as precise a sewist as that, I ended up with some raw bits poking out from my facing and some very wobbly topstitching. 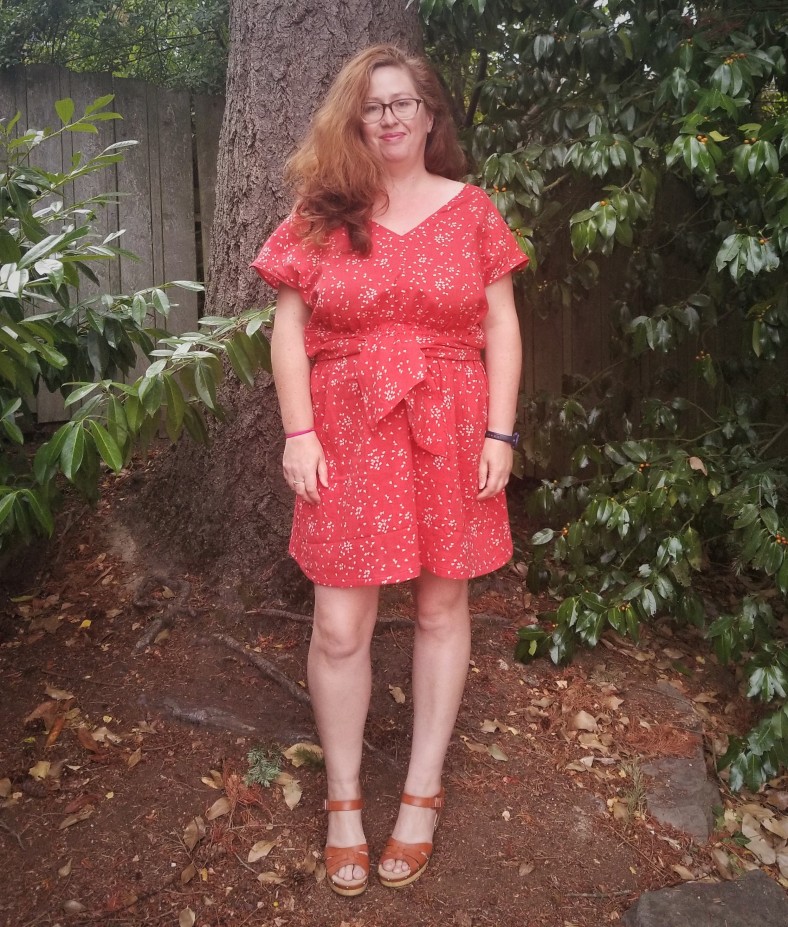 I will admit that on the armholes I thought “sod that” and actually did a very thin band with the reverse serged. It looks like very narrow piping and is actually quite nice I think.

My favourite part was the gathered back neckline. I’ve only done this with a separate yoke piece before, so just focused on the instructions and it worked out really nicely. 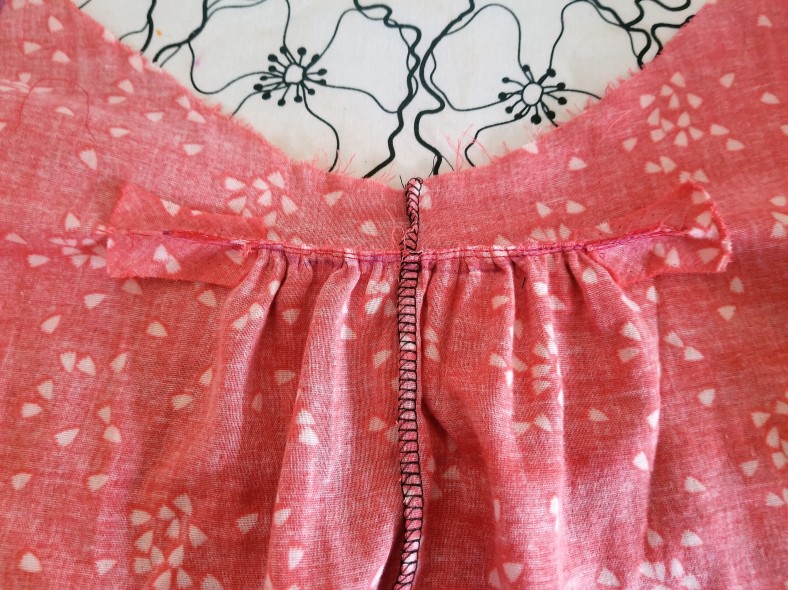 Essentially, you reinforce part of the back bodice and then slash lines horizontally to the reinforcement. You then run a line of gathering stitches along the bottom (and wider) slashline, which you gather to the length of the upper slash. Finally you sew the two together. 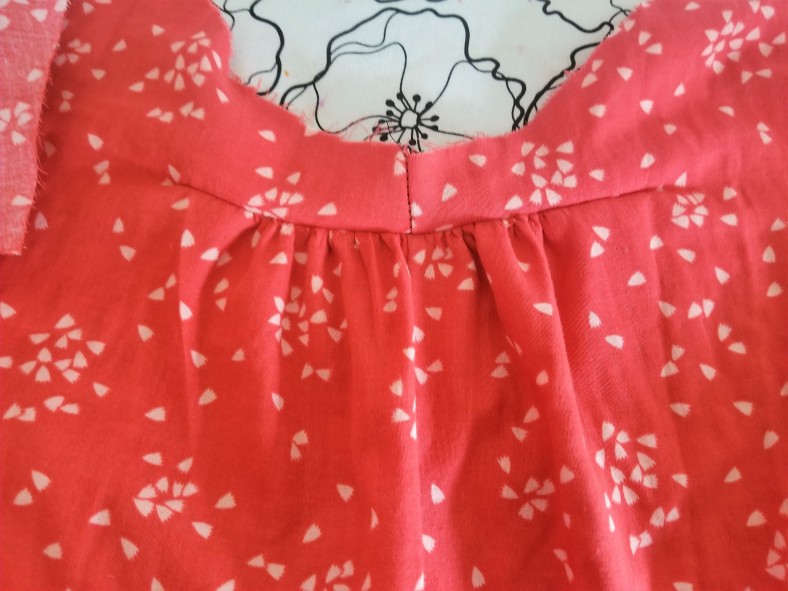 It produces a lovely inset gathered feature, and I enjoyed doing it.

One part of construction that caused some consternation amongst sewists was the section where you attached the front and back pieces, plus the back overlay, at the shoulders. I also puzzled over the instructions and picture for quite a while before thinking “oh wait, they don’t mean… fold that bit do they?” And they did. They are quite strangely worded instructions, so here are some pics and maybe they will help you if you get stuck. 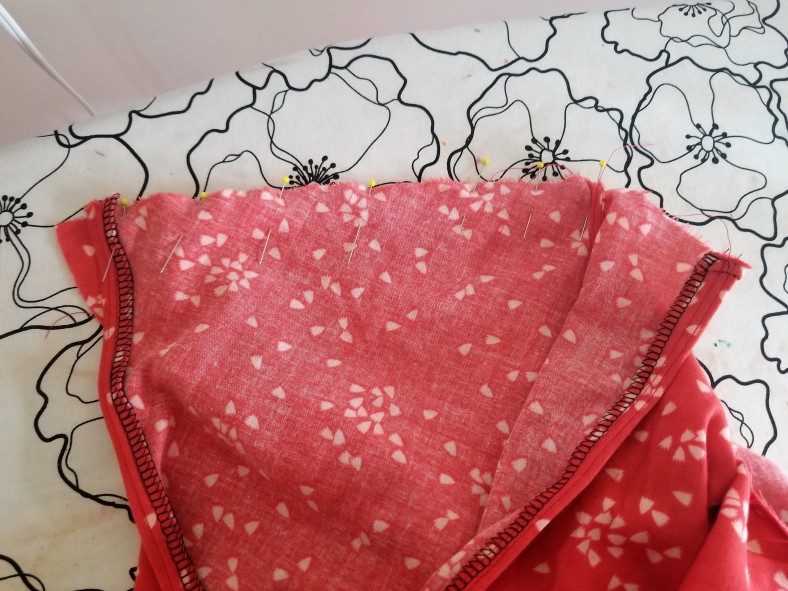 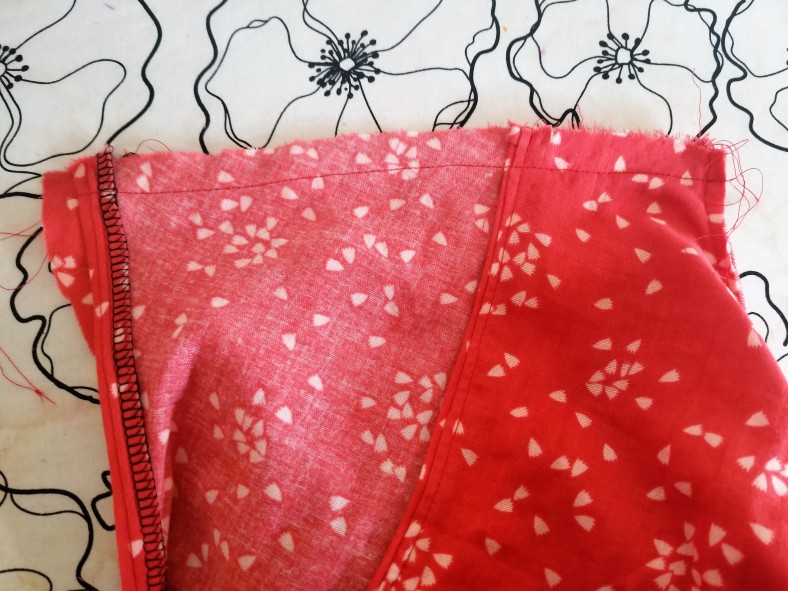 It will look like this when you pin it round and stitch it on. It seems kind of wrong, but when you flip it all out the right way, it creates a double armhole, with all the seams enclosed. Nice! I hope that makes some kind of sense. It is a little confusing. 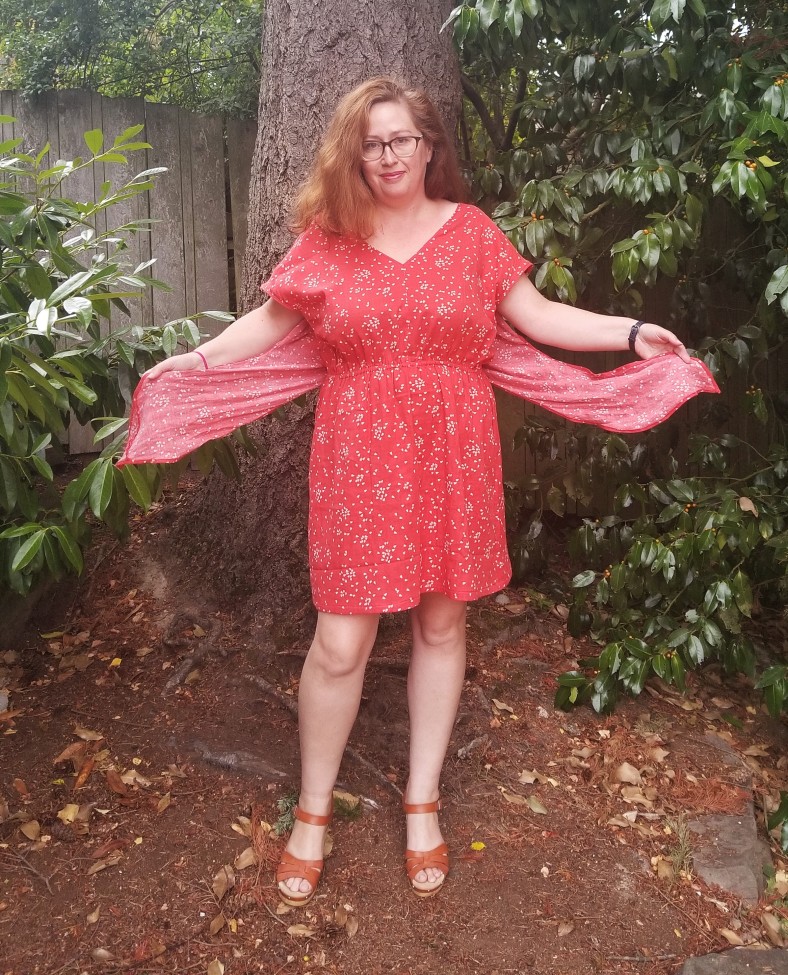 Hemming the overlay was a bit of a pain in the arse and the location of the overlay is set a little high for me, along with the waist, but, apart from the details above, the construction was otherwise fairly straightforward.

Overall, as I said at the beginning, this was a fun and fairly quick project, but ultimately just not necessarily my most flattering bodice shape. I feel like I will wear it, but if it stretches even just a smidgeon more, I’ll be looking for a broad-shouldered friend to donate it to… you know where to apply…