Did you know we’re now into the Menswear month at The Sewcialists blog? It’s one of the quarterly challenge months and you can interpret menswear any way you like by making a garment that fits the theme. I put together a post on some womenswear patterns that have menswear influences for the theme, but there are many, many other great posts to read. Take a look!

So anyway, I actually made this for my husband at Christmas as he’d requested a standard long-sleeved raglan top as my next garment for him. I didn’t get to finish it off until late January and thought I’d save it until now because… well, menswear! I wasn’t familiar with Sinclair Patterns before I made this, but happened to spot the Tao pattern on Instagram and thought I might give it a shot.

As you can see, this is a classic men’s raglan with both long-sleeved and short-sleeved options as well as different body lengths. The sizing is a US 34 to 52, roughly a 30-inch to 45-inch waist, and I made Tom the XL, which is his standard RTW size as well.

I don’t know about you, but one of the fabrics I’ve found hard to get right is tee shirt fabric for men. I’ve made Tom a few tees now, from interlock jersey, rayon jersey and cotton lycra. He wasn’t keen on either the rayon or the C/L (too drapey and clingy respectively) and the interlock started bobbling in the wash very quickly. So one of my missions was to figure out where I could get my hands on some “proper” tee fabric for men.

I started off with Thread Theory’s excellent article on just this and bought several samples in December to try out. This raglan is made from two jerseys from Organic Cotton Plus, which was of their recommendations. I duly showed Tom the website and asked him to pick some colours he liked. He went for a navy jersey (so safe, so good) and then… a “mushroom” light jersey. “Mushroom?”, I said, “are you sure?” Now I’m not one to dampen anyone’s spirits, but mushroom purple/grey reminds me of faded, stinky old student t-shirts. Perhaps I’m just a child of 90’s British university life, but this is not a colour I would wear. “Yep, I’m sure” he said, never being one to say more than is absolutely necessary. “Alright”, I said… “if you’re sure…like really sure…” and ordered it.

Aside from fabric, I also wasn’t totally sold on the shape of the raglan for my husband. Not that it isn’t an excellently-shaped raglan, but more that my husband might not have been an excellently-shaped-raglan-shaped-husband. Aw, I’m just kidding of course. He has a fine figure but it just looked a little different from the shape he normally wears in the tester/sample photos. This vague niggle continued as I pressed on with the construction, until I got him to try it on for hemming. Man, I should NOT have worried. This shirt looks amazing on him!

And whaddya know! He also looks good in fungal hues! I take it all back and will be searching out Toadstool Teal and Porcini Purple in haste. Even more importantly, he really likes it and has already requested more, which is very unusual for him. Not that he doesn’t like my sewing, he just doesn’t care about clothes all that much. The fabric is very soft, but has that undeniably t-shirt quality about it that we were after. It doesn’t cling, but skims and is very flattering. 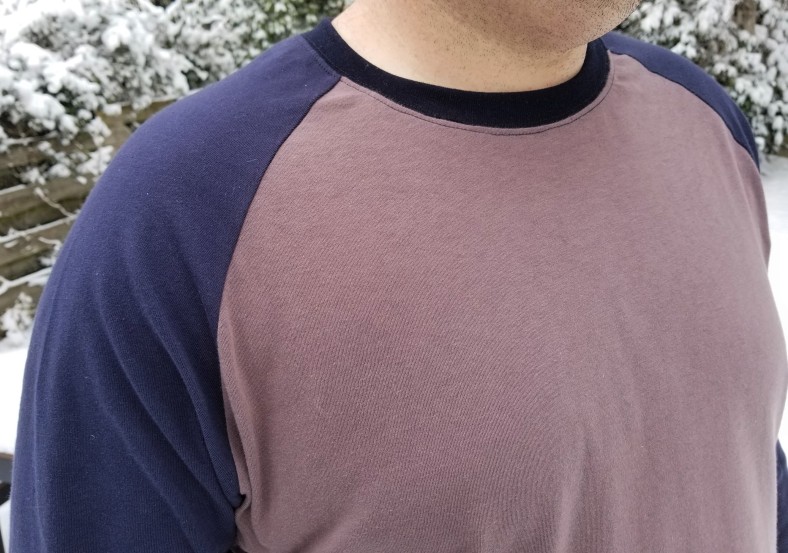 Construction-wise, this was a straightforward raglan sew. The instructions from Sinclair Designs are very thorough indeed and run you through the whole process in great detail. Which fabrics to look for, how to wash them, sewing techniques: it’s all there and would be a great resource if it’s your first raglan. I didn’t look at them too closely in all honesty and everything went together without a hitch. I did use a lovely thick rib knit for the neckline as the jersey doesn’t have a huge amount of stretch and it worked well. I actually like the neckband thickness very much – I think it’s “just right”.

I’ll take a look at Sinclair’s other patterns now that I’ve made this one and see if there’s something else I can try out, but it was successful first outing. I also have a couple of other fabrics to try out for menswear and will report back how they compare.