Hello chaps! A short (er) but sweet post today, with a new version of a dress I’ve made before. 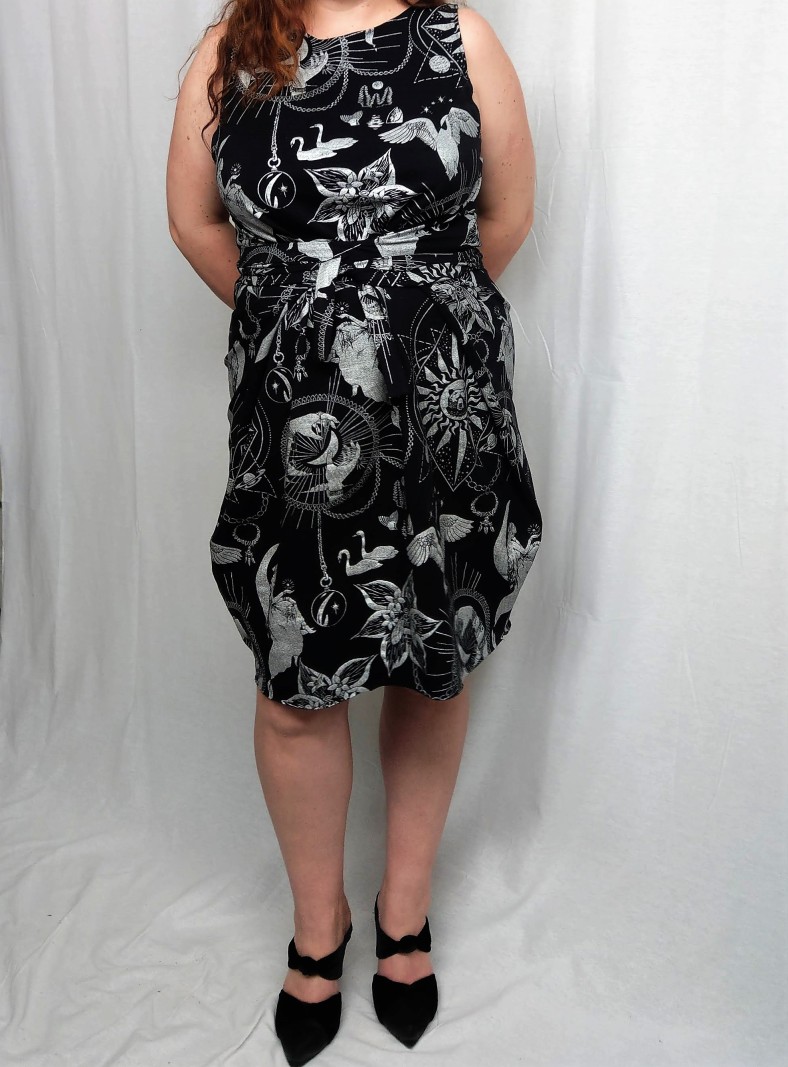 I’ve made the Kielo once, not long after I started sewing. I used a rayon knit and was pretty pleased with the result, it being one of my first knit garments, but the length of it means that I don’t wear it that often. It’s a tiny bit impractical with a toddler and the weight of it drags the rayon down, meaning I need to wear some “smoothing” undergarments to avoid every lump and bump being highlighted.

I do love the dress though, and so had been planning to make a short version at some point in the then-nebulous future. Then two things happened: first I saw Meg’s Twists and Ties challenge on Instagram and so had that in the back of my head. I also had this absolutely gorgeous organic Ehta French terry sitting in my stash and wasn’t really sure what to do with it. Isn’t it amazing? The silver is a very fine glitter and it just shines. 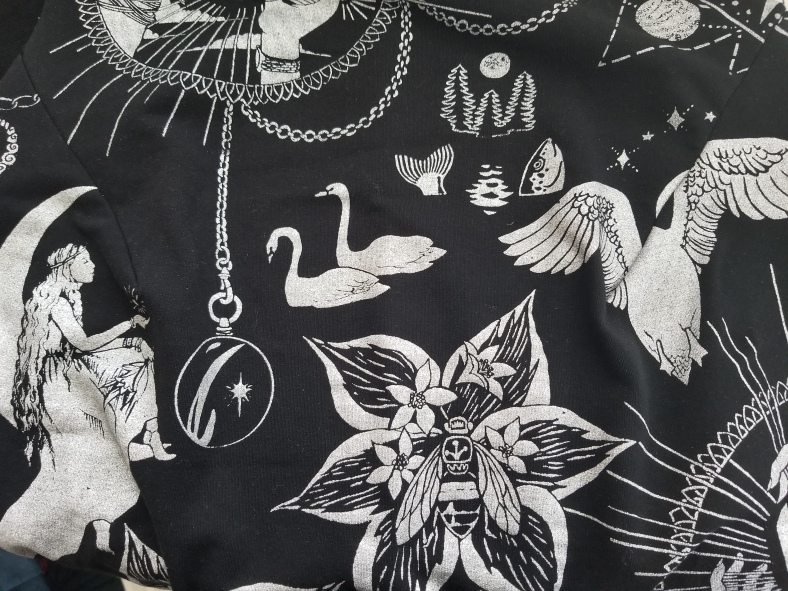 I realise it might be a bit gaudy for everyday wear and that was my issue with a sweater or something but… well, honestly… the truth is that I suddenly remembered the Oscars were on the horizon. Not that I’m going to THE Oscars (I wish!), but I will certainly wear it the night of Sunday 24th Feb. I love the Oscars – it’s something I watched every year growing up in Qatar where we had one TV channel and about 3 shows to choose from (one of which was Sesame Street). And I thought: wouldn’t this make a perfect Oscars secret-pyjamas dress? Why yes, yes it would.

Now, I only had 2 yards of this fabric and anyone who has made the Kielo knows there are only a couple of pattern pieces, but they are HUGE and UNWIELDY pieces. Nevertheless, I tried to work it out on the floor of my living room and decided that I might just be able to squeeze out a shorter version. I did, but I did it by millimetres. Literally millimetres. 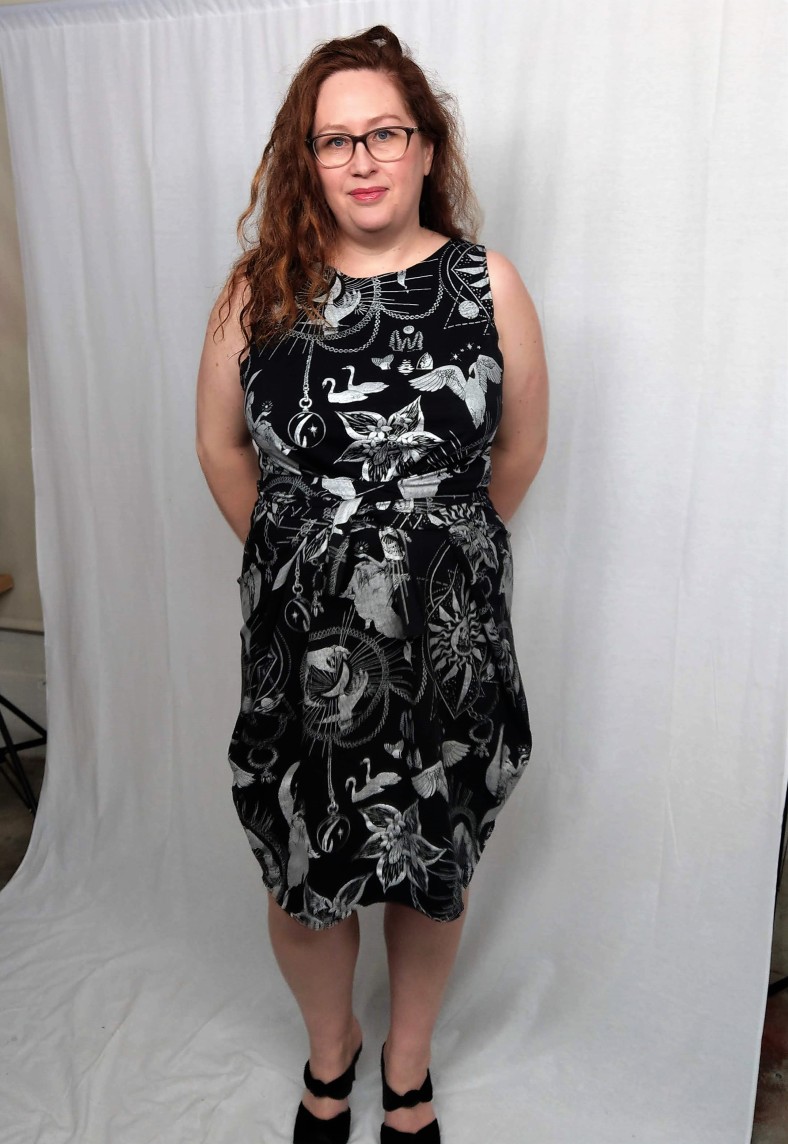 First I measured how long I wanted it. I decided I’d cut it at mid-kneecap level and work out the hem after trying it on. I also then wanted to reduce the width of the resultant hemline a little to keep that tapered feel, so took a straight two inches off the width of both the front and back body pattern pieces. There is a back centre seam and the limited fabric meant I just couldn’t pattern match unfortunately, but I decided I could live with a slightly wonky back. I won’t see it anyway, haha!

I completely missed out the vent as there was no need for it with the shortened version, which made this such a fast sew. Oh my gosh. The longest bit by far is preparing the pattern and fabric. The sewing took me maybe two hours, max, and that included unpicking a few bits I wasn’t happy with. I did make life easy by finishing the neckline and armholes by simply folding and zig-zagging. This was partly because the French terry has enough body to carry that kind of finish, but also because I wanted to take tiny hems. Note to self that I ignored from last time I made this: RAISE the armholes. They are too deep for me.

And yeah, what else can I say? I love it. It’s cosy and substantial and the silver… I love the silver… I keep finding new motifs in the design and gazing at them. I particularly like the moon lady and the bear. The shots in my basement are not as glamorous as I would have liked – I was fancying somewhere outdoors for this garment – but in this weather/light I’ll take what I can get!