I don’t know if anyone remembers one of my big goals for 2019 (and really, why would you?), but it was to sew 100 yards of fabric by year end. Any purchases in 2019 get added onto that total and since I bought 15.25 yards at Sew Expo, I really felt the need to bust some long-standing stash and decided to hit the quilting cotton. I’ve also been spending a lot of time on fitting and muslins recently, which is most unlike me, so felt the need for something with a lot of straight edges for a change. Combining those two desires makes this table runner and placemats project the perfect respite for a few days sewing. 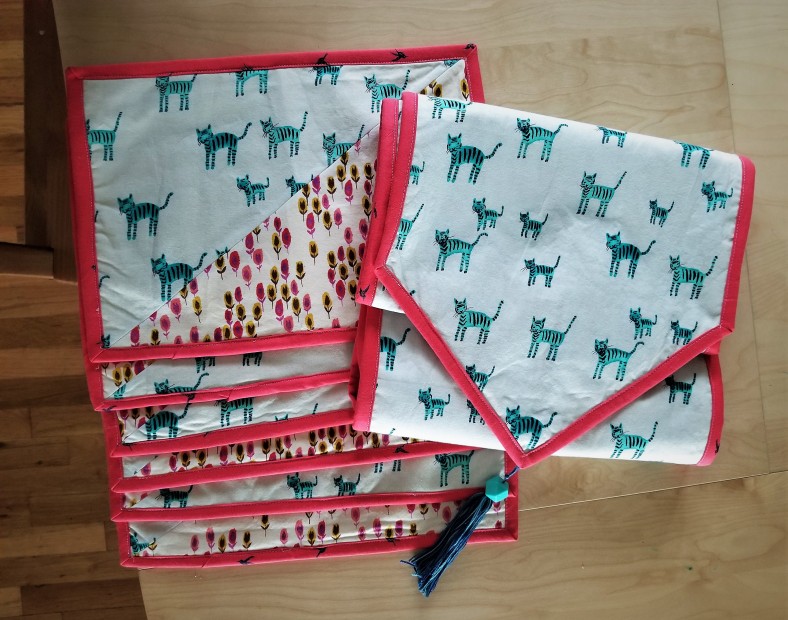 I got the patterns from a little Handmade Home booklet that came as an extra with a Simply Sewing magazine a while back. It’s nice and easy and gives me a chance to mix up a few Cotton and Steel fabrics I love, but which are unlikely to ever be made into clothing. I also got to stashbust some felt from Joe’s Halloween costume, which I used as batting, plus some beads from a teething necklace, which I’d only just put in the donation bag. It was perfect! 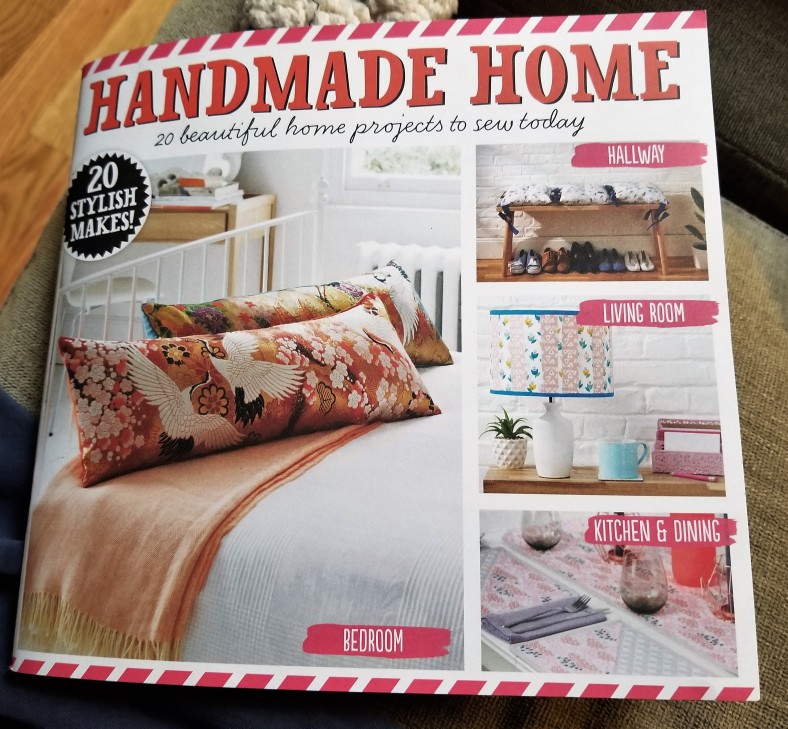 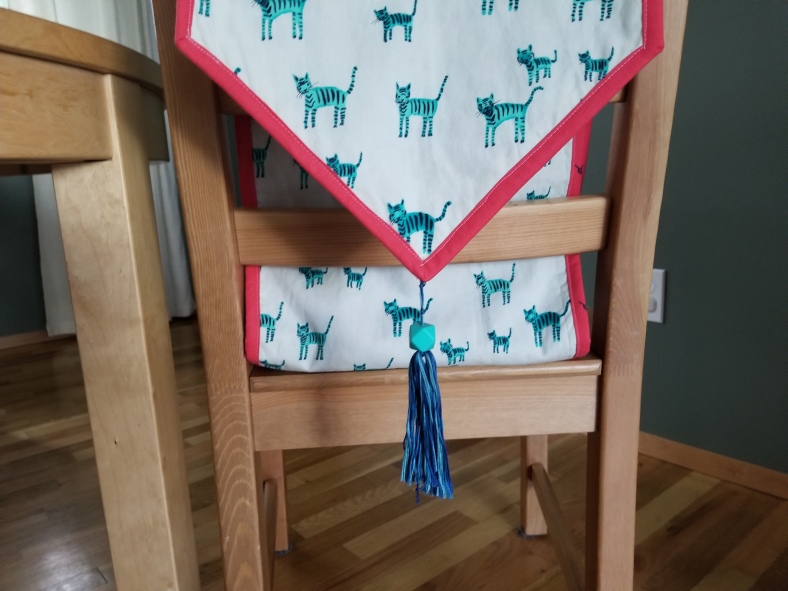 Now, I am one of those people who has always said, “I will never make a quilt. I just can’t see it.” I’m sure plenty of people have sniggered at that statement, thinking, “Oh yeah, just you wait”. And the truth is, that when you have a pile of quilting cotton sitting in your stash, one of the best ways to use it effectively is to… make a quilt. In addition, I’ve always been someone who loves colour and patterns and mixing them up. You can see that looking at my rainbow stash, even if I didn’t have a quilt in mind. I’ve discovered a few quilt designers who I actually found through dressmaking – Alison Glass for example. I’ve admired her aesthetic for some time and have made a garment or two using her lovely lightweight cotton. When I happened upon some of her quilt designs recently: Luminary and Tres, for example, I thought wow – now these I could get into.

I haven’t quite bitten the bullet yet, but the reason I’m talking about it is I figured these little projects would give me a flavour of the processes of making a big quilt. There’s no complicated piecing, but plenty of binding, and this was something I wanted to try and which I did differently than in the booklet (there aren’t many instructions for that part in any case). I found it difficult to find instructions for how to bind edges that aren’t 45 degrees (without bias binding), so I’ve included some details on that below in case you fancy giving it a go and don’t know how. 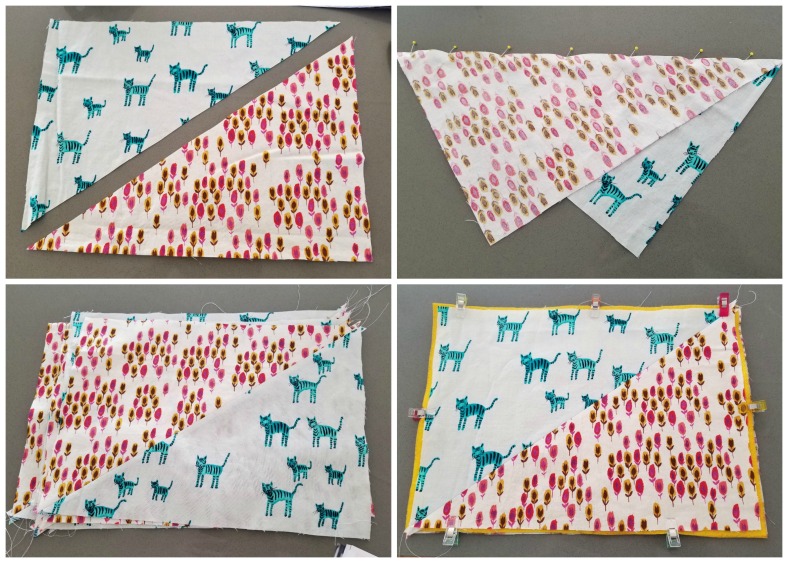 Cutting out the pieces is naturally fairly simple and the only design detail of the placemats is the diagonal halves of the mat. As I’m sure you can guess, you simply cut out the rectangles in each fabric (10 x 14 inches in this case), half them diagonally and seam them together. I used the floral fabric sideways as the backing for each placemat and used yellow felt as mentioned to pad out the middle.

One thing I did that I wouldn’t recommend for a first-timer was to serge the edges when joining the three pieces. I thought this would kill two birds with one stone, but actually the mats shifted around a bit, and I would have been better sewing them with the regular machine and trimming the excess. On the other hand it gave me a nice quarter-inch marker around the edge, so that was helpful I suppose.

Machine settings were interesting as my walking foot wasn’t very helpful for this project. That’s mostly because I can’t adjust the presser foot tension on my budget Brother machine and so it just wasn’t happy trying to fit the layers under the foot, particularly when it came to the binding. I ended up using my regular foot and lengthened the stitch length to 3mm, which seemed to produce a decent stitch. I did have to start in slightly from the edge to avoid the foot getting stuck, but that’s just the way it is. I was quite envious watching the built-in walking feet zooming over the quilt in the tutorial vids I watched. I got a chance to use a machine with one at Sew Expo recently and there was quite a difference! 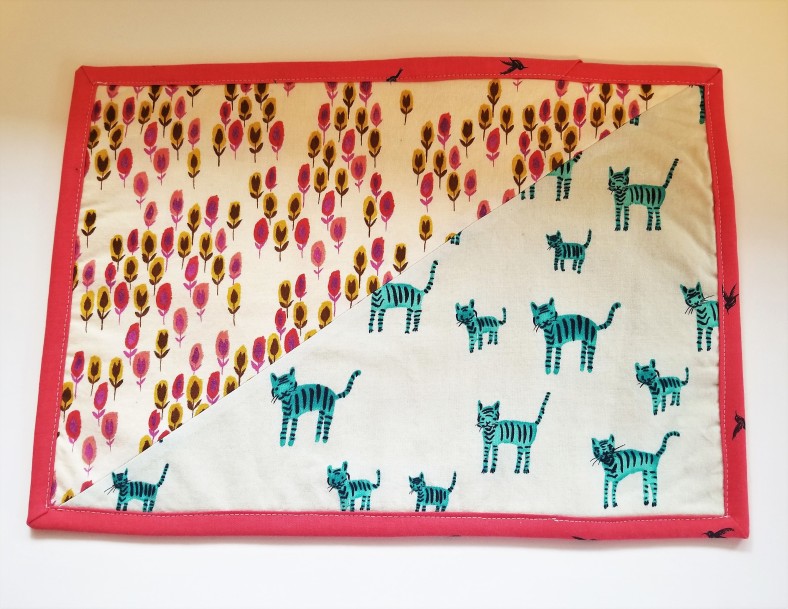 I’ve only ever used bias binding for clothing to get round all the curves and was steeling myself to prepare some. Not that it’s so hard, but it’s still a little bit of a faff. In advance, I checked out how to bind round placemat corners and realised pretty quickly from various tutorials that bias binding wasn’t necessary at all, since the edges are all straight lines. Then I realised that there were common methods used to bind round corners – meaning corners of 90 degrees. The best explanation for machine binding was from The Gourmet Quilter in this excellent little video. I know nothing about quilting blogs and vids, so this lady is probably really well known, and if so, much deserved. Clear and concise – I got it pretty quick.

I might add that the original booklet instructions involved handstitching the binding down – for six placemats and a 10 foot runner – no thanks! Ahem. Anyway, the binding is made by cutting crossgrain strips of 2.25 inches wide and the width of the fabric. To make the binding, you lay one strip perpendicular against the other, RS together, and then stitch a diagonal. Trim the seam allowance to a quarter of an inch and press the seam open. Repeat until you have the length you need!

Do above left, fold back on itself and continue stitching. Hopefully you end up with a mitred corner on the right!

I’m not going to repeat how to sew on the binding round a rectangle, as the video I reference above does it much better than I ever could. The only part I want to highlight is what you do when you turn the corners. Again, watch the video, but the important part for what I’m going to show next is the angle of folding. When you fold the binding around a 90 degree corner, you first fold it at 45 degrees and then back on itself, to continue down the next side and complete the 90 degrees.

Binding round a pointed corner

It took me a while to find something on this and it ended up being similar to what I was going to try. The clearest example I found was this larger-sized demo from Marci Baker. Great stuff. Effectively all you’re really doing is adapting the angle that you’re folding the fabric at when you reach the corner – hence why I pointed out the 45 degree angle above. I am obviously no expert as it was my first time, but I’m including a few pics here so that hopefully if you try and wonder if it’s in any way correct, you can compare to these. It does look a little strange.

With both types of corner, you want to stop at the point of intersection – that is, where the two quarter-inch seams meet. The good news is that you should already have this point because of the stitching you’ve already done to join the body pieces. You want to draw a line (maybe literally, maybe not) from that intersection mark to the point of the corner. 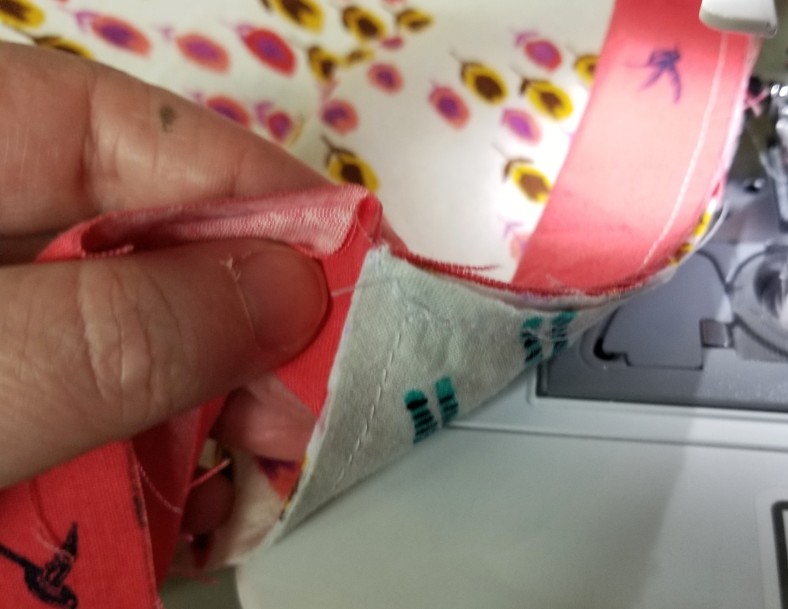 I started off marking it with a pen, but honestly found it easier just to sew close to the corner and then lift and peek under to make sure I was in the right spot. Just remember that the stitch line will bisect the corner angle and you’ll be good. That’s all you’re trying to do. 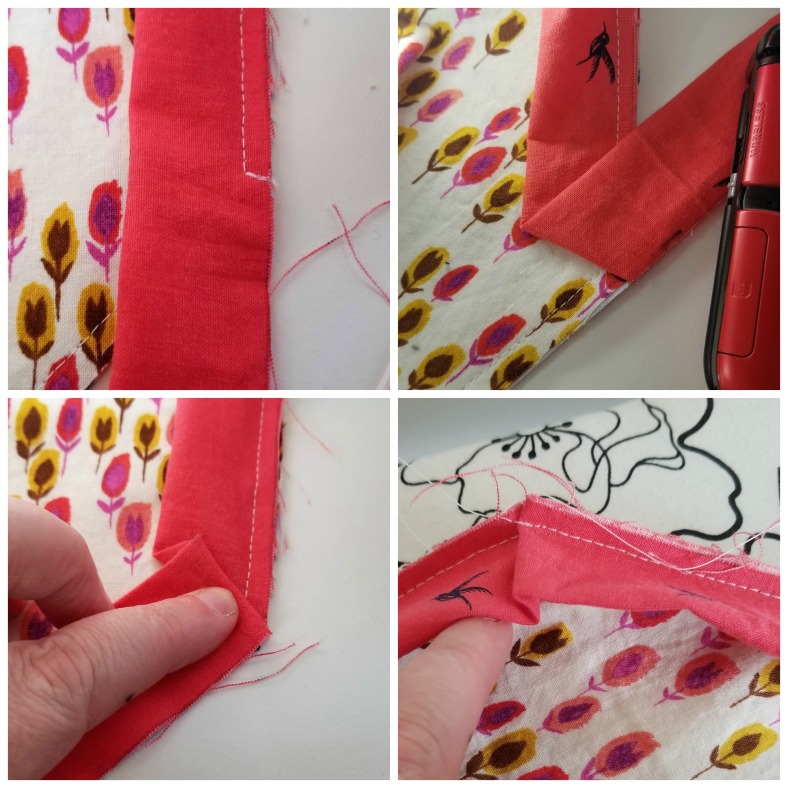 Alright, so the obtuse angles (more than 90 degrees) look like the above. You can see the initial angle of stitching is shallower than 45 degrees and that when you fold the binding back it lies in a north-east direction, rather than the due east of 90 degrees. Bringing it back across to the line of the next seam results in a fairly small fold of fabric and this is correct.

Compare to the folding for an acute angle corner (less than 90 degrees), you can see that the angles are completely different, resulting in a much deeper angle of fold, and much more fabric in the fold also. 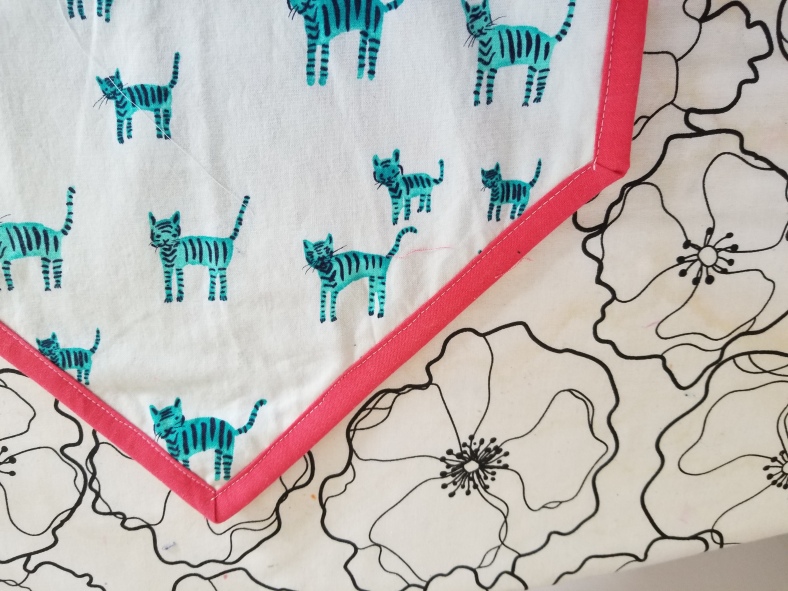 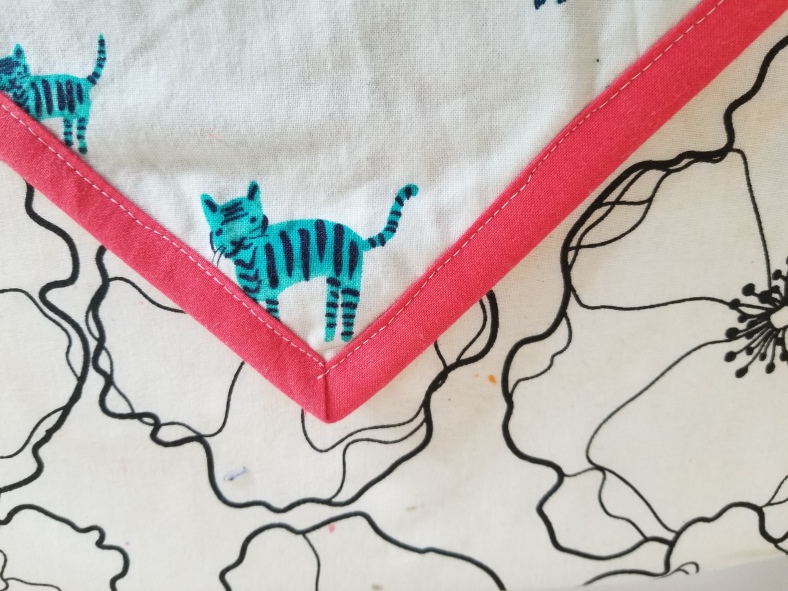 When you flip the binding over and fold the mitred corners, you should end up with something like these! Look, I’m definitely a novice and not saying it’s anywhere near perfect and my stitching is a bit wonky in places, but I’m pretty happy with how it worked out. It could have been much worse! So I hope it’s of some help if you’re not sure where you’re going with the corners.

I made the little tassels using embroidery thread just bunched together and knotted, then threaded through a little bead (these came from a baby teething necklace and are perfect!) and sewn to the corner points. This helps keep the edge down at the end of the table and has the bonus of looking pretty!

So there we are. This was such a nice little break from the fitting woes of dressmaking and I actually got a taste of that therapeutic effect that sewing lines and binding can bring, which surprised even me. I also busted a good 4+ yards of fabric (I’ll need to work out the final total) and got some much-needed homeware into the bargain.

These would make great Christmas presents and don’t take a huge amount of time. Now that I know what I’m doing, I reckon I could make another set in around 4hrs, which isn’t too bad.

Back to normal service soon as I finish up a few new garments – once I perfect that darn fitting! Talk to you soon! x

I've done so little sewing in 2022, but thought I would post my #topnine2022 nevertheless! The central photo says it all. We packed up in January and left Washington State in March, after deciding it was the right time to move back to Scotland, at least for a while :)
I'm a sucker for shirtdresses, so when I saw the new Seamwork Porter shirtdress, it jumped straight to the top of my queue. I also pictured it right away in this kelly green Cotton + Steel rayon. I reckon it will be perfect for Christmas festivities!
Last minute Halloween costumes for Julie and I! I was really pleasantly surprised by the amount of houses and trick or treaters. Yay Perth!! The boys had great fun.
I thought I'd posted this, but apparently not, so here it is for posterity. This was another class I took at QuiltCon and, as you can see, it was a Foundation Paper Piecing class: FPP Bootcamp with @quiltallthethings_
I finished a SWEATERRRR!!! Actually, I finished it a couple of weeks ago and have been wearing it pretty much non-stop. It's the Carbeth sweater by Kate Davies and it's so cosy in this @westyorkshirespinners Re: treat chunky yarn. It's a little bobbly, but I quite like the fuzzy halo this yarn brings to the party.
After several years of successfully avoiding Covid, I finally succumbed and spent a bit of September in bed. So I'm just now catching up with the #miniseriessal2022, hosted by @alisonglass and @giucy_giuce. It consists of 12 teeny weeny blocks with teeny weeny piecing and it's been fun to get stuck in (seam ripper for scale... and, y'know... errors).
Loading Comments...
%d bloggers like this: