As I’m sure you are not unaware, the new collection from Deer and Doe came out recently and the Sirocco jumpsuit immediately leapfrogged my other projects in the queue. There are three pieces in the collection, but, for me, this one stood out head and shoulders above the others as the one to make. Firstly, it’s a knit jumpsuit, which equals both comfort and somewhat less fitting – and I have plenty of other fitting-intensive projects going on. But also, I just love the balance between the flowy, pleated trousers and the structured shoulders. I’m going to New York this week for a few days and had been considering what in my wardrobe would take me from daytime sightseeing straight to nighttime eating and carousing – and this is the perfect garment. 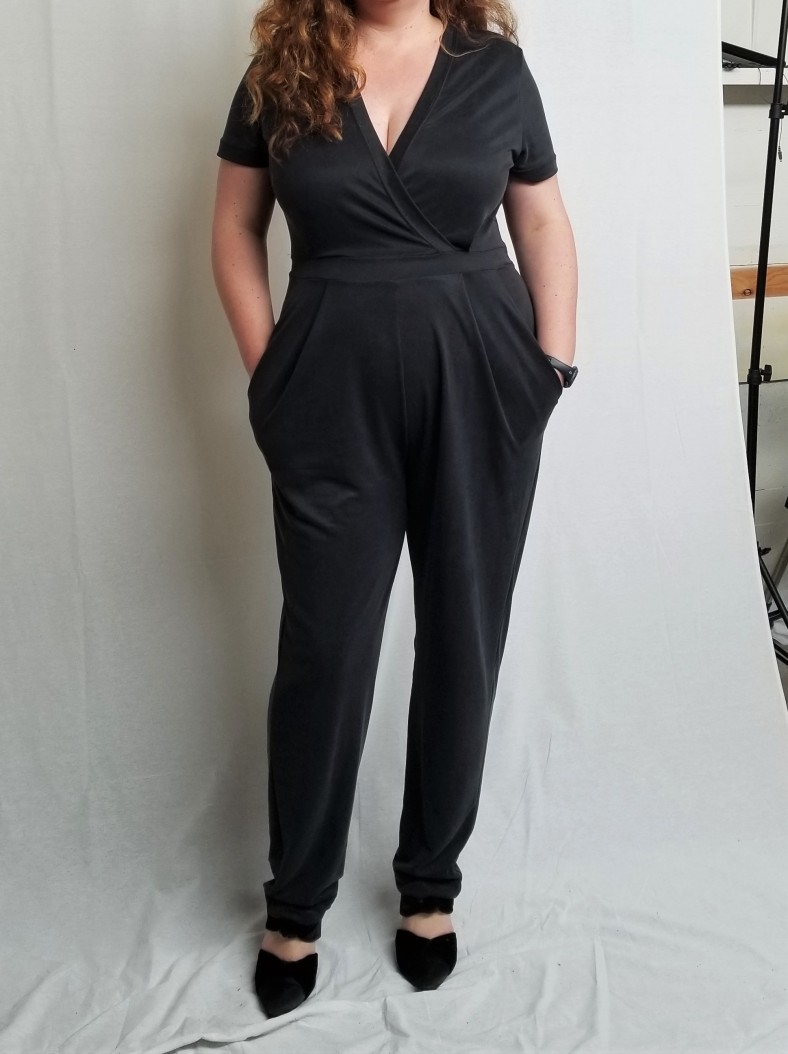 I LOVE it. Like, really love it. I’m a fairly “glass-half-full” kind of person and can see the positive in most of my projects, but it’s great when something comes along that really knocks my socks off. This jumpsuit is exactly what I hoped it might be and that doesn’t happen too often. Great drafting and just so me. Comfortable to wear, with modern clean lines, but also some structure thanks to the sleeves and pleats. Yes, I really do love it. Of course, black fabric is hard to photograph, but hopefully you can see the detail okay – I tried a few different locations. I also wore it with both heels and trainers – and let’s face it, I’m much more likely to be sporting the latter with a cardie over the top. It’s a versatile garment!

The Sirocco comes in this full-size length and also a shorter romper. It also comes in extended sizing, which is not terribly extended when compared to some other indies, but is probably quite extended by French standards. It now goes up to a 52, or a 45 5/8″ bust, 37 3/4″ waist and 48″ hips. Hopefully they will add a few more sizes, so even more sewists can sew up this great garment, but it’s a start. I have made several Melilot shirts and found that their previous largest size, the 46, was fine for me with a full bust adjustment. However, for the Siroccos I decided to grade out to the 48 below the bust as there is quite a bit of negative ease, and figured I would bring the side seams in later on, if need be (I didn’t, incidentally, so it was a good guess).

I also had the perfect fabric in my stash. I realise it’s very similar in colour to the pattern model garment, which is slightly dull as far as reveals go, but it’s exactly what I wanted – the jumpsuit equivalent of the little black dress. The pattern suggests a medium-weight knit with 60% stretch and elastane – requirements which this black slate rayon spandex met perfectly. I bought it two years ago from L’Etoffe Fabrics at the Sew Expo show and it has been waiting patiently for the perfect project. The slate gives it a slight grey blur to the black, and the weight is wonderful. It feels like a really high-end piece of fabric. 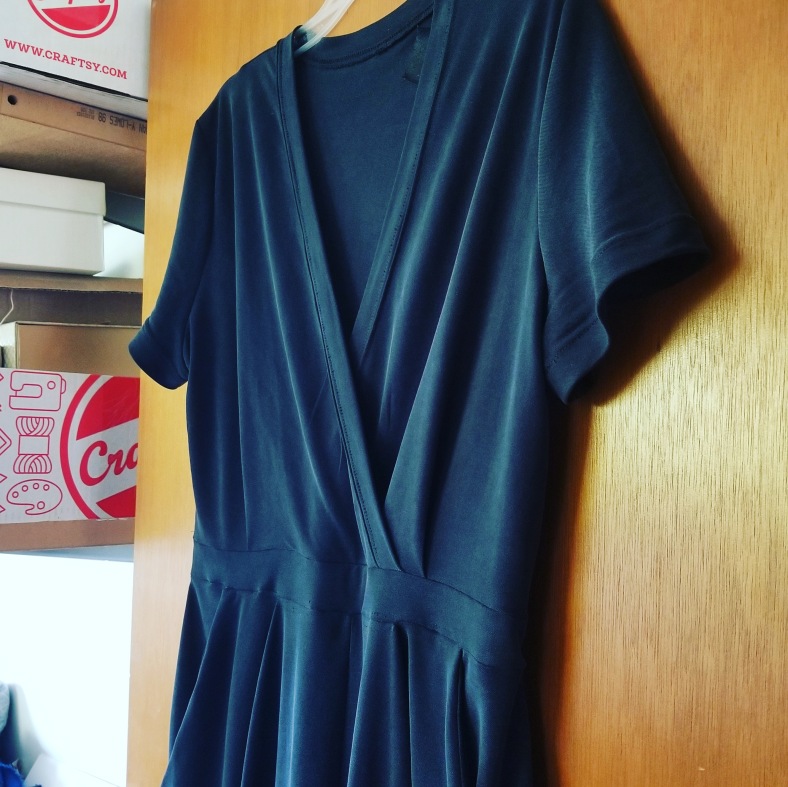 The fabric requirements are 2.75 yards, but I got it out of 2.25 yards by cutting all the pieces on one layer. Just a note here: you really do need the 60% stretch as there are no closures on this jumpsuit, so you need to be able to pull it on and off using that ease. This is also the reason for the recovery requirement – having pulled it on, you don’t want your front to droop where you’ve stretched it.

I constructed the jumpsuit exactly as per the instructions, which I always find to be concise, but sufficient with Deer and Doe. They don’t give you “extra” instructions, but they do give you all the necessary steps. It reminded me a lot of the Magnolia dress I made recently, and of course when I thought about it, it basically is the same bodice in knit. I did manage to fold the front trouser waist pleats the wrong way at first and was vaguely aware that something didn’t look quite right, but it was an easy matter to put right – even towards the end of the construction process. I marked up the pieces in white chalk and used a combo of the serger and regular machine, which made this a surprisingly fast sew: maybe 6-8 hrs? Less for a fast sewist.

Wrong pleat on the left, corrected on the right

I only made a couple of very small, entirely personal changes to this jumpsuit. The main one was to give myself extra room in the crotch length seam and the waistband. I do sometimes need a little extra crotch length room in trousers and was slightly concerned about these, but decided the crotch looked reasonably deep in the photos. A 3/8″ seam allowance doesn’t give you much to play with and in retrospect I’d have been wiser giving myself 5/8″ or so here. I tried on the top and bottom before I joined them and was slightly alarmed as it seemed I was severely lacking in length if I were to avoid a camel toe situation. And we all want to avoid that. 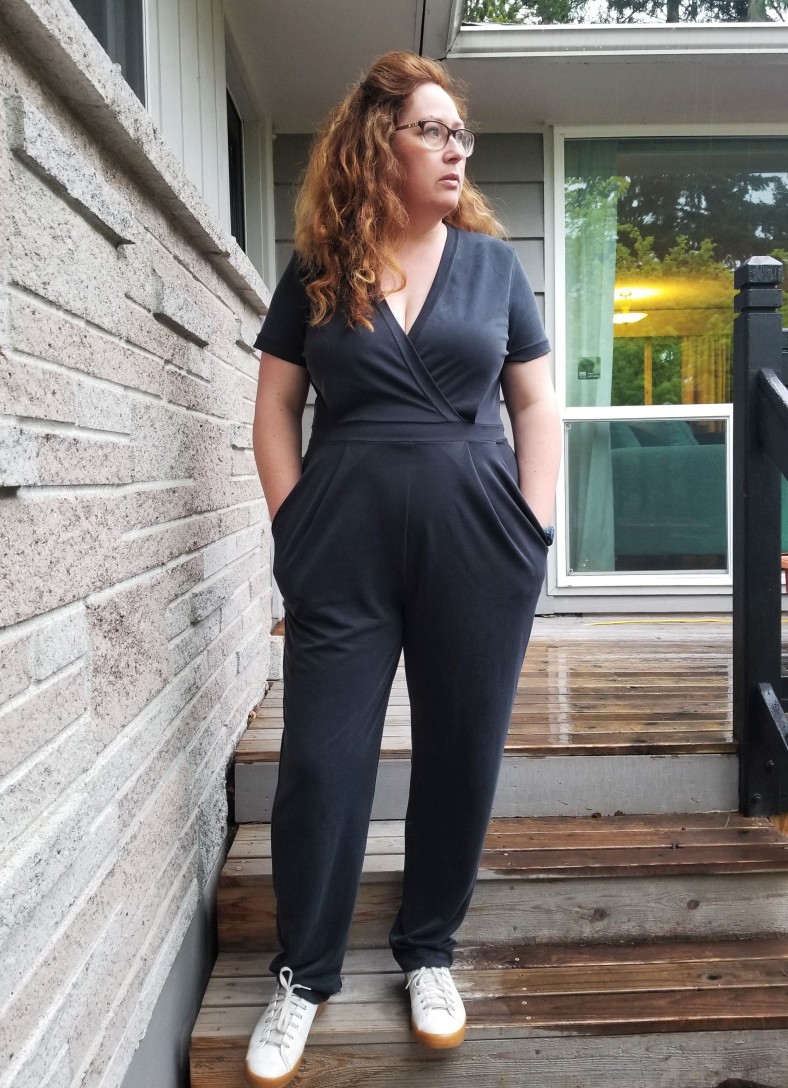 My plan was to add an “extra” waistband onto the piece that was already existing, creating a “double waistband” as it were, and increasing the depth by an inch or so. As it happened, once I’d actually joined the two pieces with basting stitches (I basted the waistband and the side seams), it really wasn’t as huge a difference as I’d feared and so I decided to try letting the seams out a little first. The miracles of garment-making, eh?!

I let out the waistband and crotch seam somewhere around 1/8″ each, adding 3/8″ to the total length. And you know what? It just about does the trick! The downside is that it does make the fabric look a little messy as the previous threadholes seem quite obvious, and I can’t really steam this fabric too much. I suspect (hope) they will disappear a little though. My other worry is that the seams are now a little weak, with such a slim seam allowance. I will let you know if I suddenly pop open in some fancy New York bar! Urk.

Next time – and there will be one, unless jumpsuits take a sudden and dramatic drop off the precipice of the fashionably acceptable cliff – I will increase the front crotch rise by 1/2 an inch or so (note to self: notes in that older fitting book somewhere) and also the waistband by 1/2 an inch as I need a tad more length there too. The other change I made was to reduce the shoulder width by 1/2 an inch. Although I started with the smaller 46 size, it’s still a wider shoulder than I need.

Gotta finish with an outtake

Overall: well, this is a dream of a pattern. I’m no 6 foot tall, size 8 Amazon, but as you can see the design elongates my legs and I think the darts, sleeves, and even pleats, which some curvier ladies avoid like the plague, are all rather flattering. It’s super comfy and, as I already mentioned, will go from day to night with ease. It is indeed basically the jumpsuit equivalent of the little black dress and I can thoroughly recommend it if you’re also in need of such an item in your own wardrobe.