One of the issues you come up against when trying to sew a handmade wardrobe is to understand which clothes are really the ones that you reach for in the morning. I make a lot of lovely clothes, some of which I do reach for instinctively, but others which I have to think about before I put them on. Clothes that take a little more planning: buttoned shirts, jumpsuits, highly colourful or patterned fabrics. Without fail, however, one type of garment I reach for when I’m in a rush is a loose knit dress. It’s easy, you only need one item of clothing, you don’t need to consider your underwear too closely and a myriad of other easy reasons. 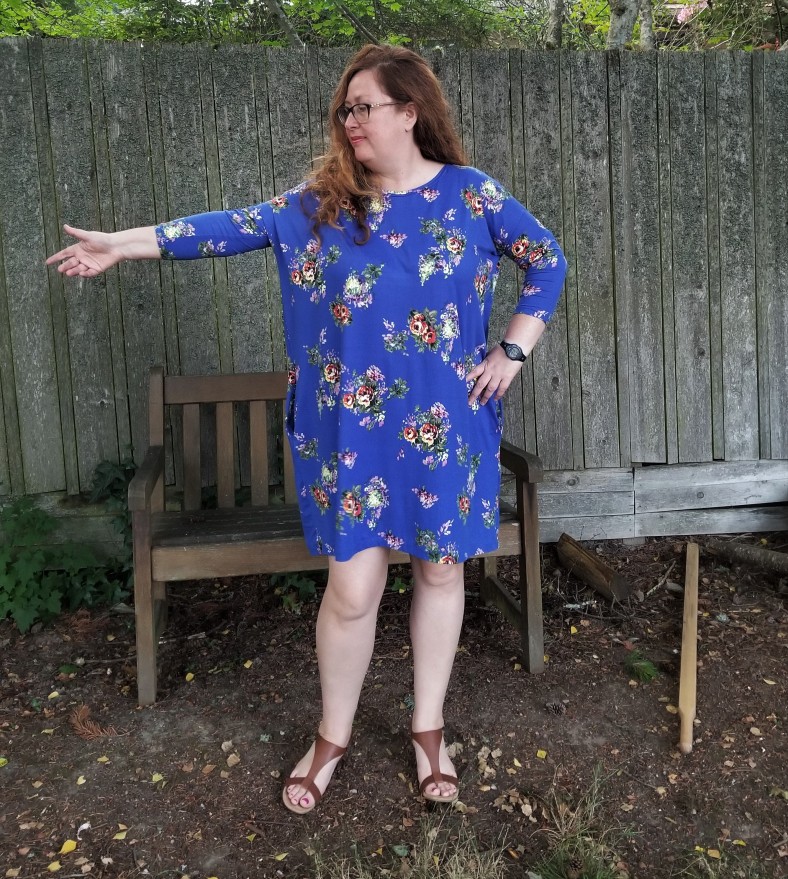 However, it’s not something I’ve made too many of. I guess post-childbirth I owned plenty and it’s only recently I really got rid of the last few. They weren’t even especially flattering. but, as per my reasoning above, I reached for them constantly. So – all this brings me to the Seamwork Tacara, which definitely fits into the “easy-to-wear cocoon dress” category. I liked the look of it when it was released, but sort of dismissed it as a dress that looked great on the tall, slim model, but would look like a tent on me. Then several versions appeared on the old Internet (in particular on the ladies in this Curvy Sewing Collective post) and I started to reconsider, because it looked bloomin’ marvellous on them. 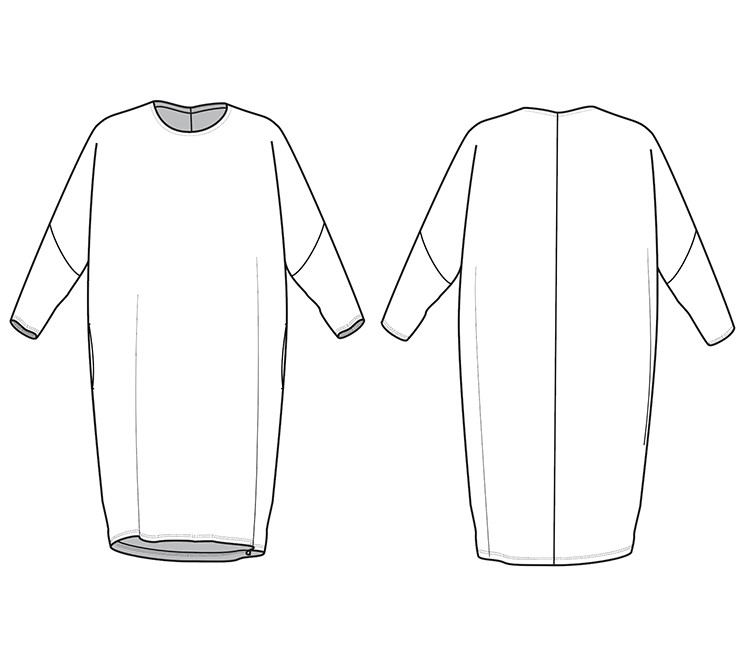 My sister visited back in late spring and we decided to make something together. I can’t remember how we settled on the Tacara, but her version also looked really great and I decided I would make one too, especially since I’d then already stuck the pdf together! So even though it’s the first version for myself, it’s really a repeat dress in a way, which is why it’s one of the garments on my list of TNTs to make over summer.

In actual sizing, I am currently between a 14 and a 16, but choosing using my high bust measurement would mean choosing a size 12. There is an absolute ton of ease in this dress, so I decided to make a straight 12 and see how it ended up. I figured it was imperative to get a nice neat fit at the shoulders area to avoid looking like a cube. As you can see, it was a decent decision and there’s still plenty of room for me to move around without feeling like I’m drowning. It also seems, from the reviews I’ve read, that many other sewists decided to go down a size or two as well, so I would say check the finished measurements carefully before you cut into your fabric!

I was all prepared to make the wearable muslin in a pink French terry I got recently, but I just wasn’t feeling it somehow. So at the last minute I switched it out for this blue floral double-brushed poly (DBP), which I picked up at Joanns for a pittance eons ago, before I even knew what DBP was. It’s one of the few knits that I prefer cutting with scissors as anything with poly content seems to leave those hard little fuzzy ridges on your cutting mat (know what I mean?) that are the devil to get off. DBP doesn’t seem to shift around as much as a rayon knit does, so it was reasonably painless to cut compared to some slinky knits I’ve wrestled with. It is worth noting it doesn’t breathe too well though, which I found out at a baseball game in the sun the other day. Whew!

Construction-wise, the Tacara is a simple make. I didn’t care for the pocket construction: I used the instructions because they were different to my usual method (even methods from previous Seamwork patterns), but they seemed needlessly faffy. Now I’ve finished, I can’t decide if you make the pockets like that to emphasise the cocoon shape or if I just didn’t do a very good job of it, but next time I will use a more “normal” method to compare, because I feel like they sit a bit strangely, even after pressing – and the finish wasn’t the neatest. To try and summarise, you would normally attach the pockets and then sew the whole side seam, including pockets in a oner. This time, Seamwork has you deal with the pockets first and then sew two separate seams above and below the pocket. I’m trying to remember what we did with my sister’s Tacara. I do vaguely recall saying that the instructions were weird and we were going to do it a different way, but I can’t remember if it was that part or not. I’ll have to ask her.

Anyway, pocket issues aside, the rest of the dress is simple. The pattern has dropped shoulders and sleeves. Some people have mentioned the sleeves are a little tight – on me they are snug and I don’t usually have to make sleeve width adjustments; if you do, it would be worth checking. Otherwise, it’s a simple sew with a neckband finish at the neckline and turned hems on the sleeves and bottom.

As I hoped, the sleeker fit at the arms and shoulders means that the dress looks fine elsewhere and I’m pretty happy with the result. It’s a great one for hiding a huge lunch and, as I said at the start, that is the effect I was after. I’ve already happily reached for it on several occasions, so I think I can say – job done!