I wasn’t sure whether I should go ahead and finish this skirt and, more to the point, post it, but I do think it’s important to post fails as well as successes and this skirt unfortunately did end up largely in the former category. There is one overriding reason for it being in this category and that is because I picked a totally unsuitable fabric for it, which is something that does occasionally trip me up. 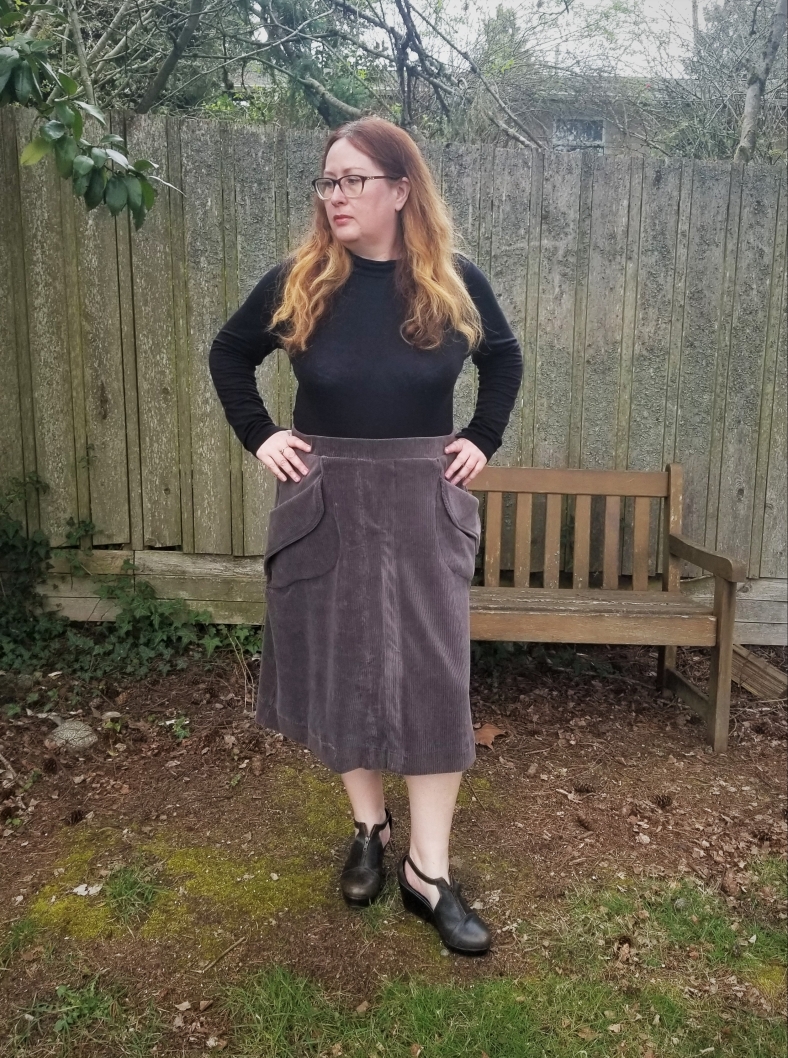 Okay, so here’s the story. The Sewcialists recently did one of their mini-challenges, which was to sew something associated with your birth year. It could be a pattern from that year, a copy of a design from that year or basically anything associated with the period around your birth year. Mine is 1975. At the same time, I’ve been meaning to sew one of my Stretch & Sew patterns for ages. I got a large number of them from the 1960s through the 1990s from my local Buy Nothing group. 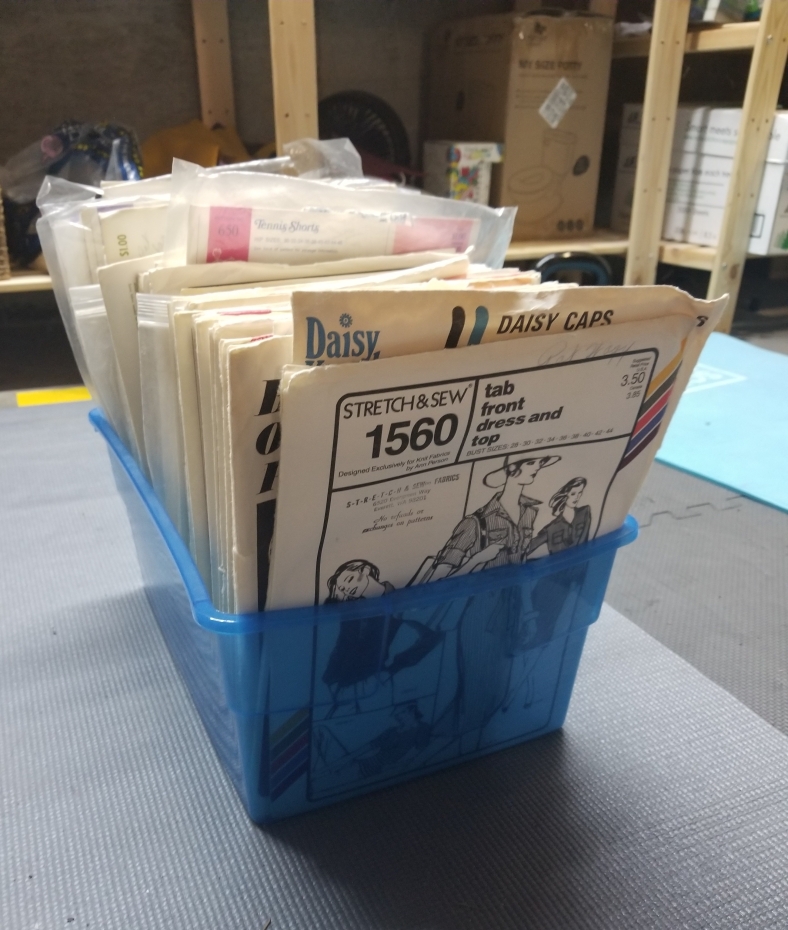 If you aren’t familiar with Stretch & Sew, here’s a little info, because the company occupies quite a unique little position in fashion history. It was started up by Ann Person, who opened her first store in Oregon in 1967. This was around the time knit fabrics were really becoming available to the average home sewist and Ann had worked on a new technique for sewing knits at home with a regular sewing machine. 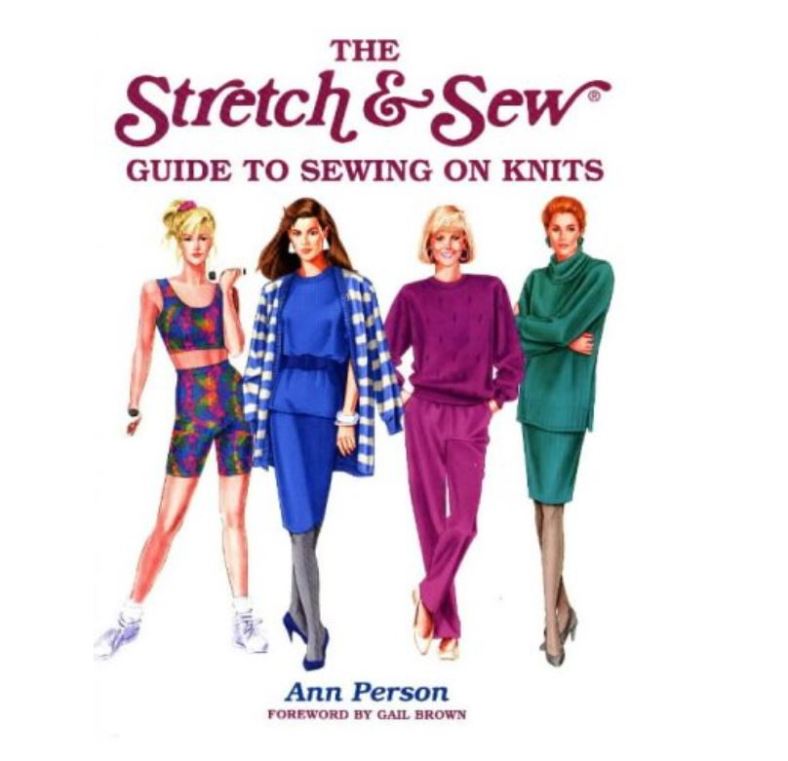 This technique involved (as far as I’ve found) using a straight stitch of around 3mm and stretching your fabric as you sew, so that you have some “give” for when the fabric stretches; she also taught how to sew knits using the zigzag stitch as more sewing machines came with the capability. Ann Person really cornered this niche of the market, with patterns, books, courses and stores across the country (all exclusively for knit garments) and many sewists still swear by her methods and patterns. I’ve heard plenty of people talk about how well drafted they are and I have some really choice ones in my collection that I’d like to try. Here’s a link to a vintage Wiki site with a catalogue of some of her patterns and also a link from Threads magazine that gives a little more info about Ann Person herself. 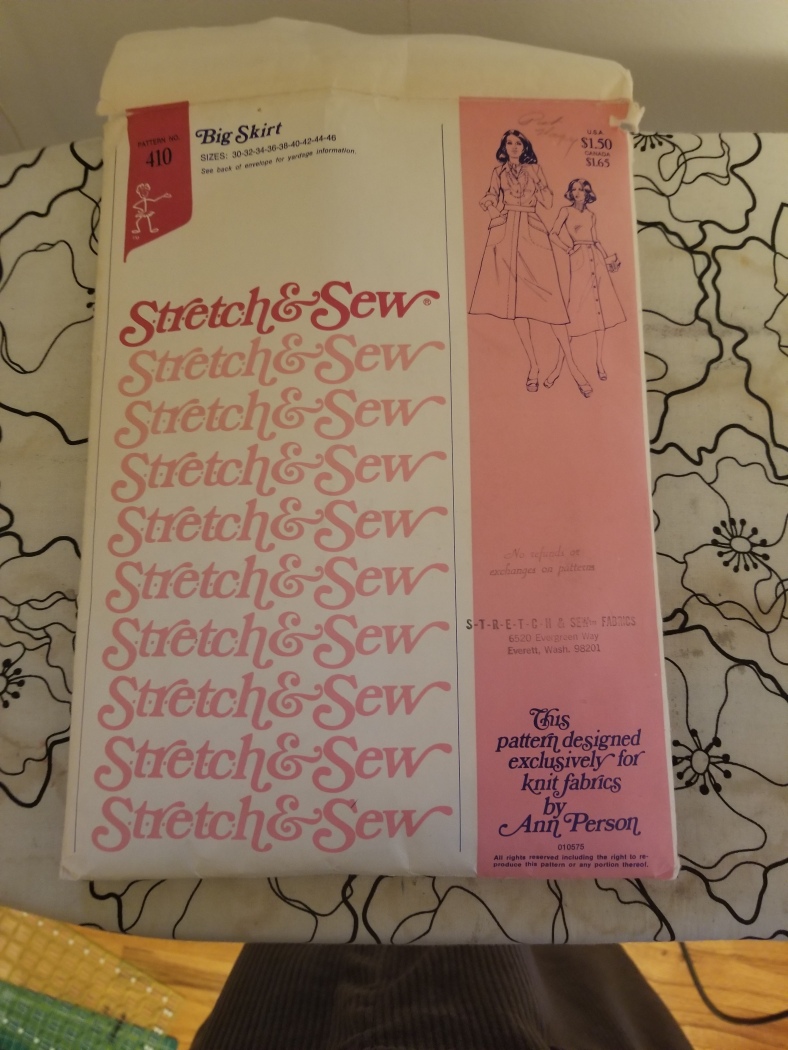 Back to this particular project though and, as it turned out, I had just ONE pattern from the year 1975. I don’t know if the person in charge of naming the patterns was having an off day, had a bad hangover or wanted to leave the company, but didn’t know how to break it to Ann, but the name of this pattern is… “Big Skirt”. Yep, that’s it. Big Skirt. Doesn’t exactly entice one to rip open the pattern envelope and get creating, but there you are. Actually, the pattern picture is quite nice and, although I wasn’t too sure this was a style that I could pull off, I decided to go for it anyway.

A skirt like this makes me think immediately of tweed or corduroy and, as luck would have it, I had a grey stretch corduroy in my stash, which was just long enough for the pattern pieces. Herein lay my problem. I immediately decided this was the “perfect fabric” and even though a little voice at the back of my head was saying… “it’s… quite spongey isn’t it Claire?”… I ploughed ahead. 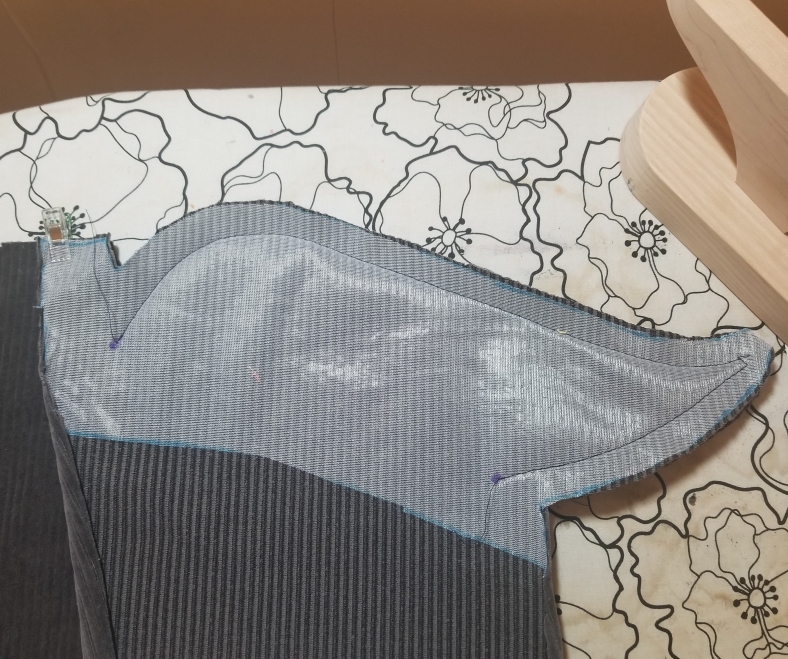 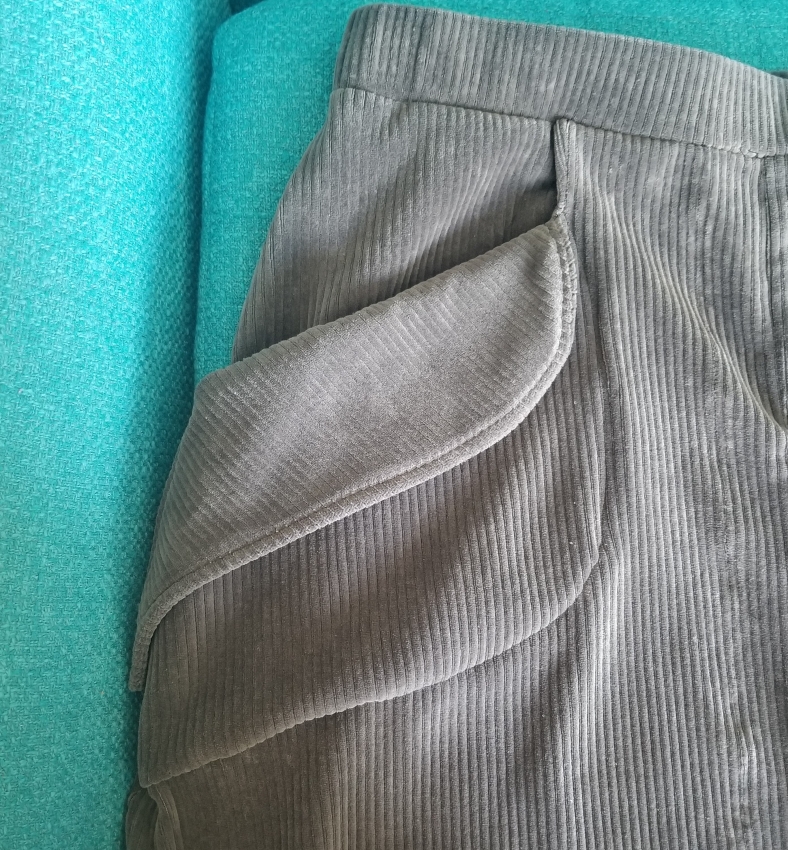 The thing about this pattern is that it’s designed and sewn almost like a woven-fabric pattern. Of course it’s drafted taking stretch into account, but a lot of the sewing is straight-stitch work as you would do on a woven garment. First you construct the pockets and flaps, which I must say was quite an ingenious design. You pin the pocket onto the skirt and the flaps are actually built into the design, so you sew around them and then fold them over at the end, after the facing is attached. 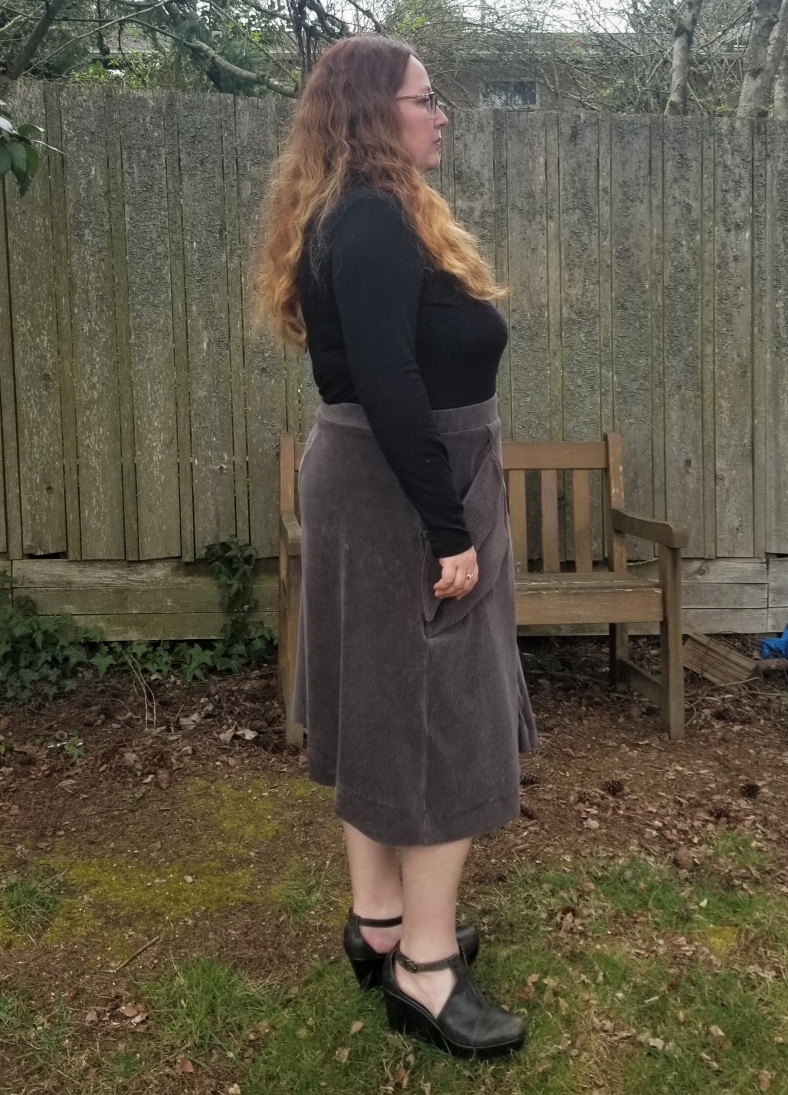 You create the front overlap by sewing the two front pieces together and then stitching down the seam allowance to create a faux placket. You then continue as you would imagine, sewing the back seam, side seams and adding the waistband. The instructions were all very good, with excellent, clear pictures and text. However, as I mentioned at the top, my fabric was just too thick and spongey for this pattern. Since it was being put together like a woven garment I was ending up with large thicknesses to get under the machine foot at seam points – sometimes 5 or 6 layers thick. I graded like heck, which helped a touch, but it still wasn’t easy.

This led to a couple of issues. Firstly, one other problem with this fabric is that it doesn’t take kindly to rough treatment. In that way it behaves a bit like a woven corduroy, and so any places where I had a lot of fabric under the machine foot came out all bruised and ruffled – looking like I’d scored I with a knife in some places. You also can’t press it very easily as it needs a cool iron, but that makes absolutely no imprint on this spongey stuff. If you use a warmer iron, you get that lovely shiny effect that happens with corduroy or velvets. It’s a no-win situation. 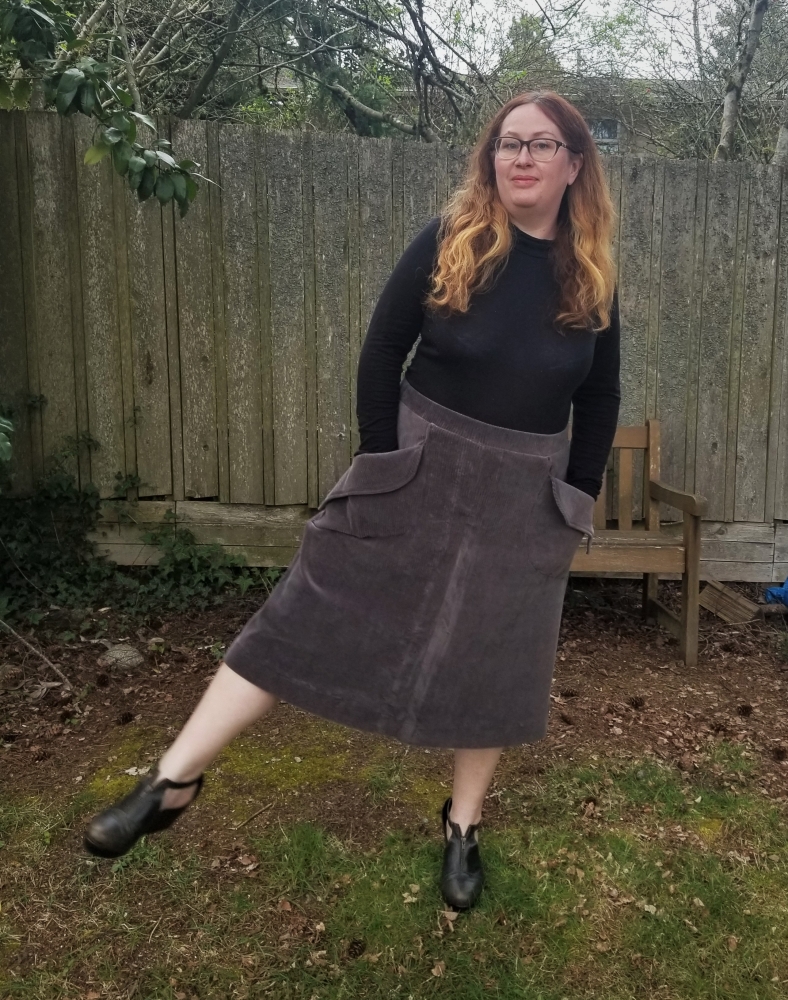 I used my walking foot to start, but this exacerbated the issue and I just couldn’t sew some parts with it, so it was back to the normal foot. This then caused the issue that my fabric was feeding into the machine at different speeds and I ended up with a horrific front placket. You can see clearly it’s not topstitched at all evenly and this was my THIRD time doing it. Not only that, but I folded the placket the wrong way first and it took me an embarrassingly long time to realise that it wasn’t the pattern’s fault, but well and truly mine. I had to unpick it and you can see that VERY clearly on the front. Sigh. It was really hard to get a smooth stitchline anywhere, if I’m honest. 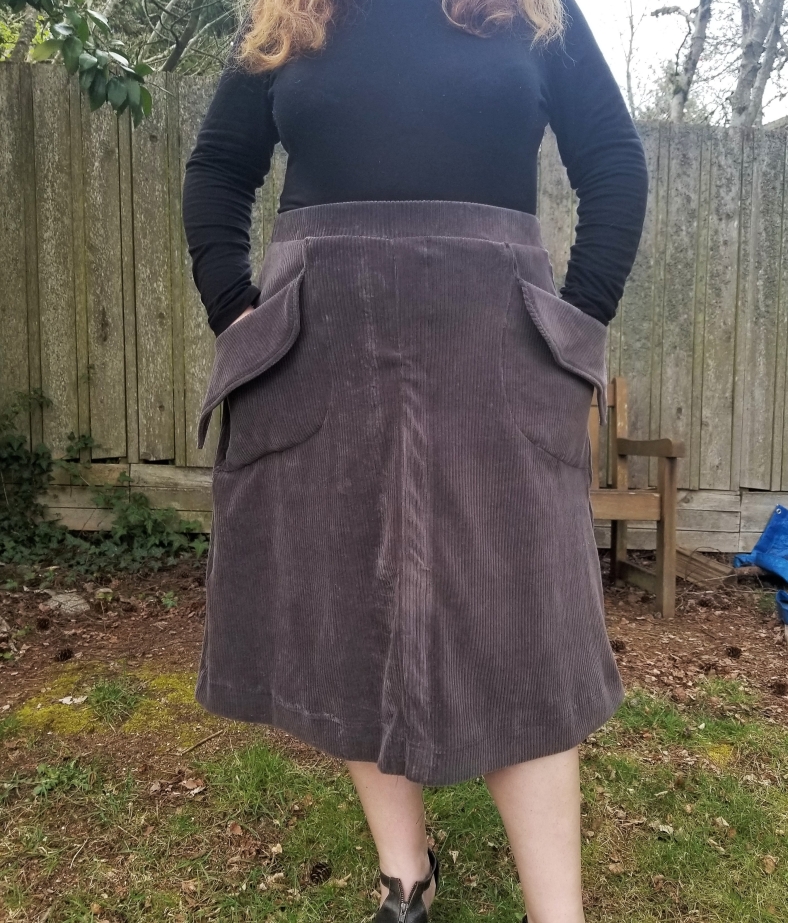 At that point I was ready to call it a disaster, so wasn’t really very careful with the rest of the finishing. My coverstitch needle broke as I coverstitched the hem – that’s how thick the hem was at some points! It was almost in the bin then. But I persevered, if only for completeness. Then when I realised my error with the centre placket I slightly regretted my haste. It’s a shame, because actually I thought this was going to be a fail for more stylistic reasons. I never wear skirts that come halfway down my shin and this one actually looks…okay. The shape is pretty nice and not too “Big Skirt-esque” at all. I love the pockets and in a thinner, less bulky fabric they would have looked pretty sweet. I’m sort of crossing my fingers that some of the more nasty bits will un-nasty themselves in the wash, but, realistically, they probably won’t.

As I mentioned at the top, I wasn’t sure whether to post this and I’m definitely not posting this for anyone to tell me “Oh you could fix it like this” or “It looks okay, really” but just to share the experience so that someone else might avoid the same mistakes. Also I LOVE looking at other people’s cock-ups. Schadenfreude, eh? Haha. Plus, there is good news! This skirt is insanely comfortable. I’ve been wearing it since I took these pics earlier today and I haven’t taken it off again. So I definitely will wear it. It’s pull-on, comfy and cosy. I reckon with a long cardi I might even pop to the shops with it on. Who am I kidding? Of course I will. I’m just going to call it loungewear and be done with it. 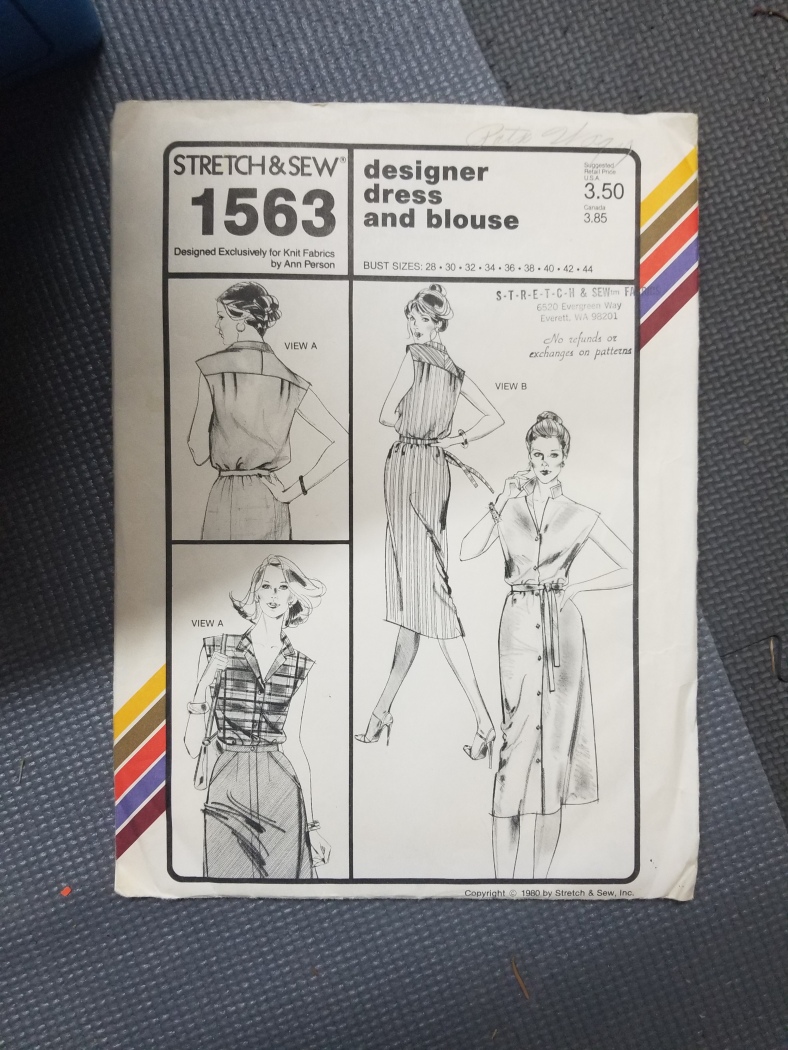 Another thing I wanted to mention was that this pattern went up to my hip size: 46″ That seems unusual for a “vintage” pattern and I was very pleased it did. I think they vary a bit, but they’re certainly not the kind of patterns that stop at a 28″ waist as the largest size (at least the ones I flicked through). Above are a few more patterns from my collection I rather like the look of. I think you can tell which decade they’re from just by the pattern envelope design, never mind the garment. I quite like how the look was overhauled so drastically every 10 years or so.

We took some pics in the back garden and since we’re all going stir crazy along with the rest of the world, I gave myself a 70s centre parting and took some of those kooky lifestyle shots you used to see back in the day. Sort of. I’m limited to a giant cocktail umbrella and a kid’s slide (tight fit), but I did my best. Enjoy! 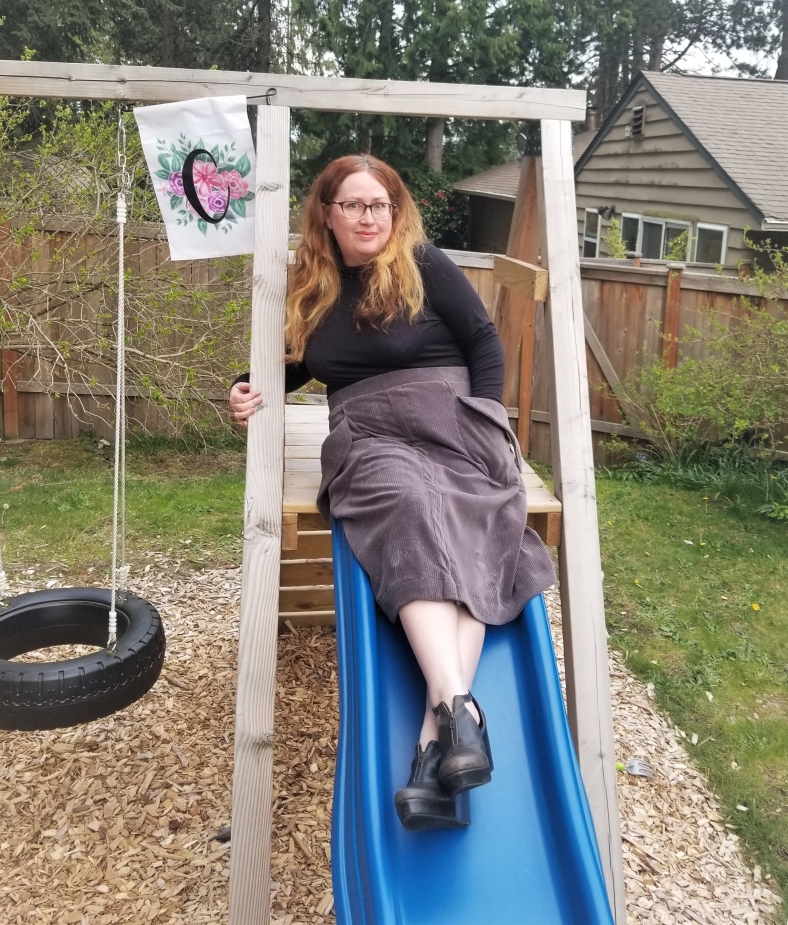