Alright, sooo, we got a new puppy a few weeks ago – and this skirt is called the BARKLY skirt. I mean – what’s a girl to do? Enjoy a guest blog appearance from our new Lagotto Romagnolo (or Italian lake dog to you and I) who is now known as… Luigi. Oh yes we did.

I was really excited when I saw one of the patterns for Sew my Style was a new pattern from In The Folds. I’ve made a couple of the free patterns that the owner/designer Emily collaborated on with Peppermint magazine (The Jumpsuit and Jersey Dress) and I also own the Rushcutter dress and Flynn jacket pattern from her own line, although I must admit I am yet to make them (time, time….always time). But I’ve made and seen enough to know that Emily is a fastidious designer who takes great care with her design, drafting and instructions – and so I was always going to plump for the Barkly skirt this month.

I tend to stay away from woven skirts with waistbands as I have a mummy tummy, for want of a better phrase, and I think they can make me look pretty dumpy. But I rather liked the proportions of this one and, really, it’s all about the lovely detailing. 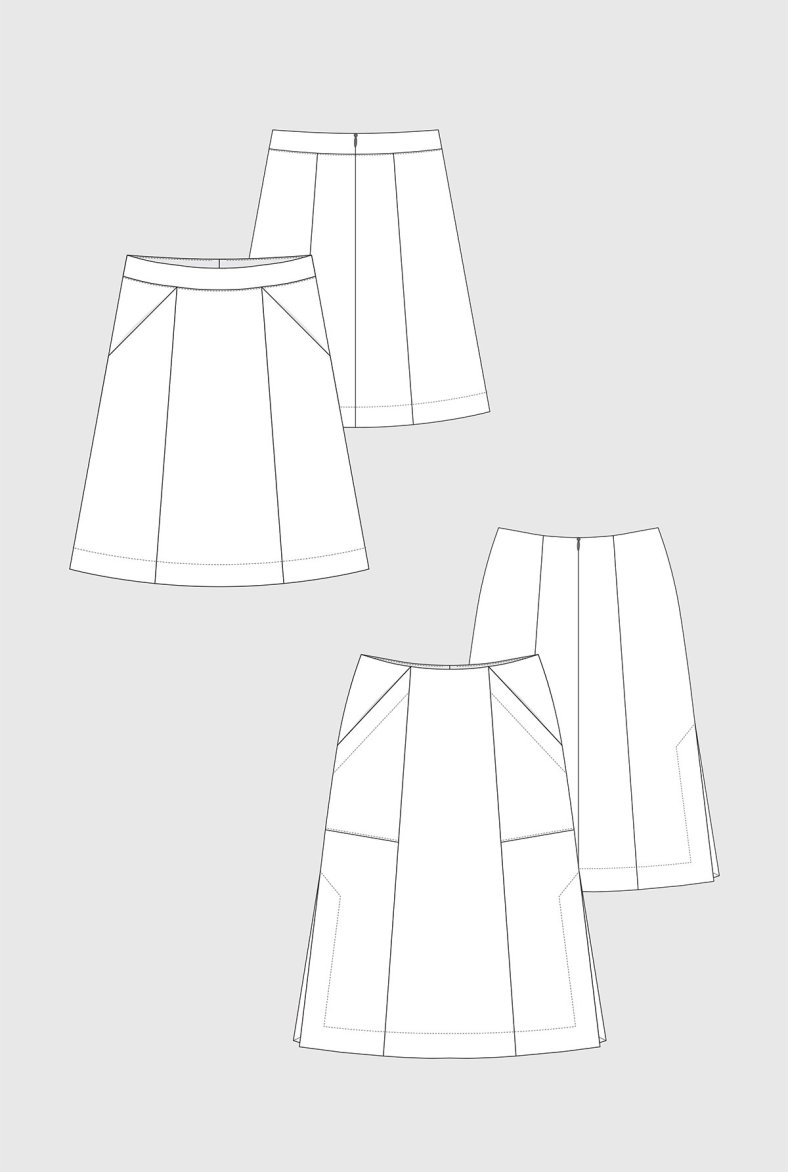 There are two views on the Barkly and I went for the longer View B, which has side splits, patch pockets and a waist facing rather than a waistband. Both views share a panelled A-line shape and an invisible zip fastening at the back. They’re also completely interchangeable and In The Folds has produced a rather lovely style booklet (the Style Variation Kit) which gives you details on how to mix and match to your heart’s content without coming a cropper. 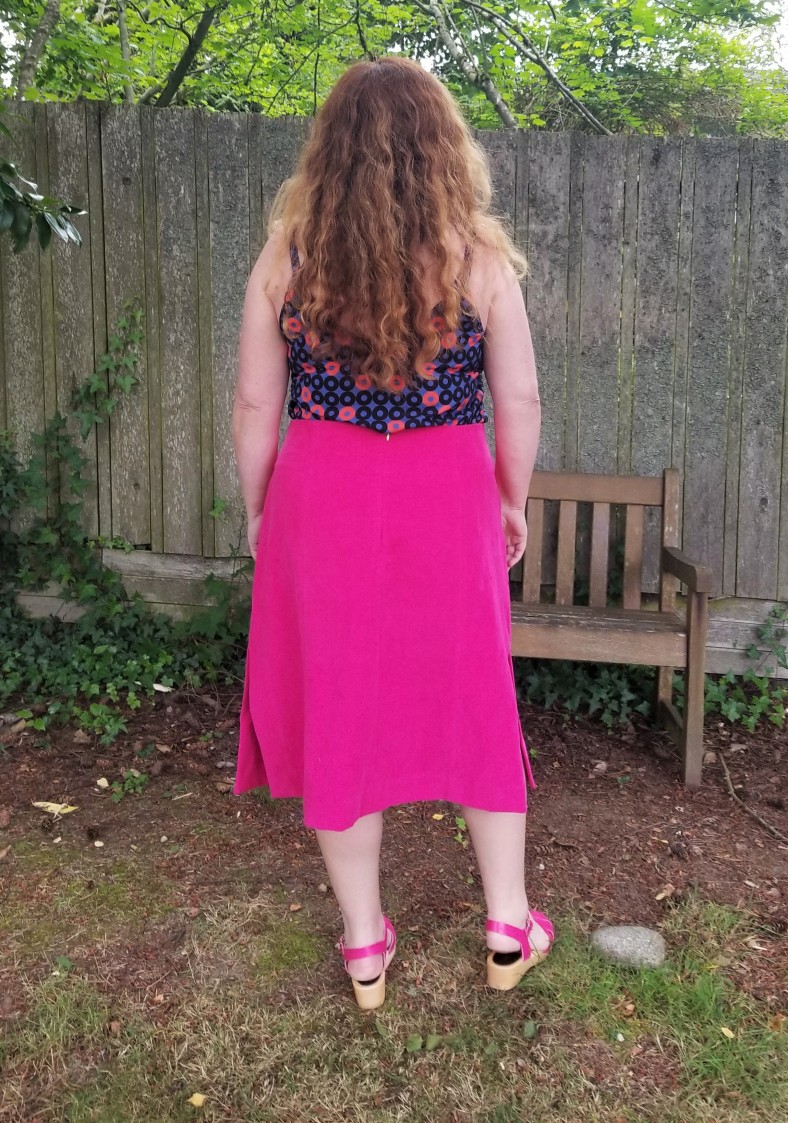 I decided to make View B as per the original drawing and it was actually a reasonably fast project – maybe 3-4 hrs of sewing? As you can see, I decided to make it from this HOT pink corduroy that I picked up at a Seattlesews swap day – in the distant past when we could still have actual human contact for any young people reading this –  and, delightfully, from a good friend of mine here in Seattle. It’s a little heavier than my recent Robert Kaufman 21-wale culottes were, but still has a little movement – so I’m guessing it’s perhaps a 14-wale corduroy, and very soft. And SOOO pink. 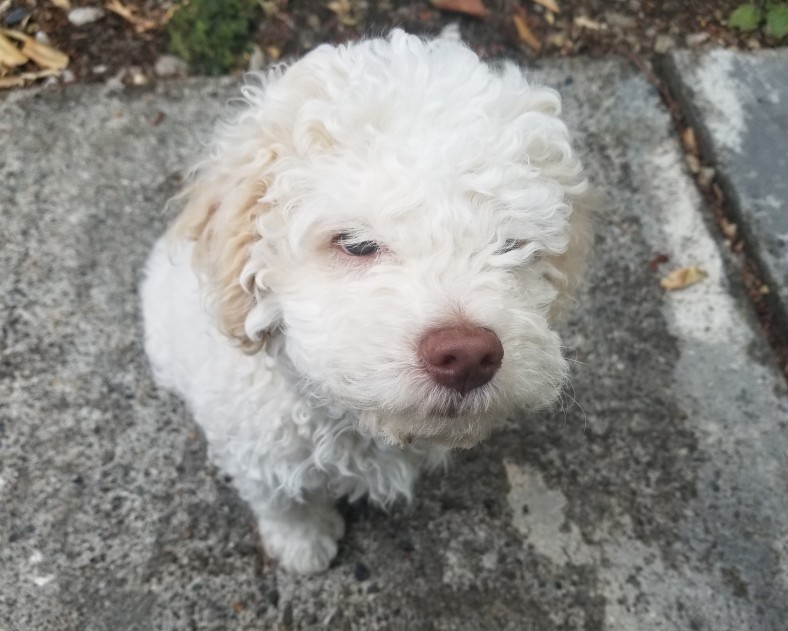 Luigi break – I mean, loookkkk at that face. Omg.

I don’t know about you, but I am on a serious bright colour-kick right now. I don’t know if it’s the cabin fever, or the shitty state of the world, but I am drawn to colours that would sear your eyeballs at 100 paces. Bring it on, baby. I’m loving it. This pink is amazing and is so wearable. Seriously, I have so many things I can wear it with. I also think the knock-you-between-the-eyes shade counteracts any dowdiness this length and shape has on my particular shape – at least, that’s the hope. One note: it’s horrible to photograph. Perhaps it’s so bright the focus gave up, but you can’t really see the seam details too well, which is a shame. You’ll just have to believe me that they’re pretty!

I pondered about which size to make, and went for the Size G, grading out half a size at the waist, but I would have been fine with a straight G as it’s just a touch loose. It’s generously drafted, although certainly not oversized. There are ten sizes, ranging from a 24″ waist to a 45 5/8″ waist, so a good range.

The construction was a joy – and who doesn’t love a project about which you can say that? Staystitching, understitching and finishing instructions exactly where you need them, which makes me happy. There’s no official seam allowance as it changes a little, depending on which part of the skirt you’re working on. A slightly different approach, but it was very clear and worked for me!

The mitred corners at the hem and side splits are a thing of joy to behold and sew – a very neat finish. The only deviation I took was to look up my favourite invisible zipper tutorial – the BHL one – because it’s been a while and I always, always forget how you flip the skirt for the second half of the zip. It’s easy, but… I’m a goldfish, what can I say? I only had a couple of invisible zips to hand, so I used this neon yellow one and I think it adds a really satisfying pop of colour to proceedings.

The only thing about using this wonderful fabric, or any corduroy, is that it’s not easy to press without marking, so I took some sage advice and finger-pressed it and then ran the very tip of my iron down just the centre of the seams, which seemed to do the job. You can also see the imprint of the facing through the top layer; even more so since I handstitched it down, but I think it’s just a facet of the fabric type. I don’t really mind it, but it’s a thing. I felt the facing really did need hand stitching as it was trying to roll a little, even with understitching. I considered trying to topstitch around the top, which would also have worked, but wanted to attempt to preserve the clean facing finish first.

All in all, it’s a very satisfying project and I really needed a workhorse kind of skirt in my wardrobe. This is the kind of skirt I will pull on a) because it’s HOT PINK and b) any day I just want to wear something comfy and easy and sort of covering, if that makes sense. I like it a lot!