Are you a fabric before pattern person, or a pattern before fabric person? I keep changing my mind as to which I tend more towards, and since I’m trying to pull most fabric from my existing stash, it does blur the lines somewhat. One thing I have discovered recently is that sometimes I know exactly what I’m going to make, whether it’s the pattern or fabric I decide on first, but that I’m also quite happy to allow one or the other to percolate and when the perfect coupling occurs to me, my decision-making is pretty instant.

When I bought these striking Nerida Hansen fabrics, I knew that I wanted something long and swishy for the black and white fabric, in particular, but just wasn’t sure quite what. I also knew that I wanted to make another Seamwork Clarke tank with the alterations I made from the last Clarke. I was flicking through the Seamwork catalogue and spotted the Dezi skirt:  a swishy, bias-cut midi skirt and immediately the entire project came into focus.

The Dezi skirt is a fairly simple skirt with just a few pieces. It has a fluted shape, diagonal seamline and elastic waistband. I made a straight 16 as that corresponded very well to my measurements – the elastic waistband always gives you a little leeway to loosen or tighten too. Initially, I wasn’t totally convinced about the elastic waistband, but figured that for a first try at a bias-cut skirt, perhaps it would be better to use something a little more forgiving.

I had read somewhere that as a general guideline you should allow yourself a little more room when making something cut on the bias – perhaps even sizing up a size. I’ve only made airy things so far, but on the experience of this – my first fitted garment – I would agree with this hypothesis. It’s a teensy bit snug, and although it fits nicely, I wouldn’t be swimming around in the next size up. So a little something to bear in mind, dependent on your ease with ease, so to speak.

Sometimes, one of the hardest parts about working with fabric on the bias is trying to visualise how the pieces will look together. It’s another good reason to order a little more fabric than you would if you were cutting in a regular rotation. Some patterns are easy, but if you’re working with a pattern that’s specifically designed to be made on the bias like the Dezi skirt (as opposed to one that can be rotated either way, like the Clarke tank) you may well have some weird-looking pattern pieces, and that makes visualising the end result even trickier.

I wanted to try and orient my pieces so that the design on the skirt had the directional fabric facing the same way – in this case with the sunburst on the top of the design. It took a bit of head-scratching, and I couldn’t follow the fabric layout suggested in the pattern for this particular fabric. I would have ended up with upside down pieces. 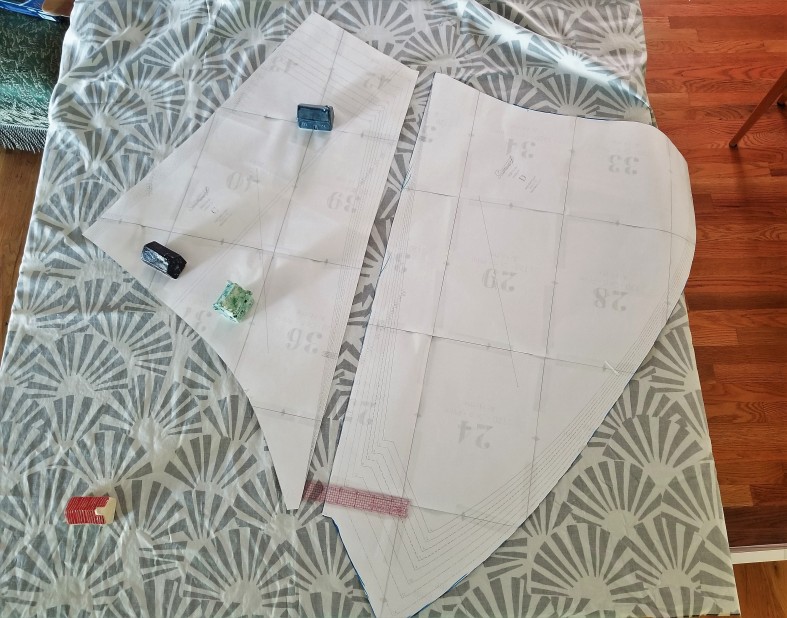 I found the easiest thing to do was lay out the pieces so that they formed a complete front or back piece. The Dezi has a diagonal seam and I also considered whether I wanted to the upper and lower pieces to be contrasting with the design offset along the seam, or to match: to look like one piece. In the end, I decided to try and match them, which I didn’t quite manage to do, but almost. Next time!

The construction of the skirt is a breeze. As long as you’re careful with the fabric pieces and use a fairly light touch, there’s nothing tricky here and it’s a fast sew; just an hour or two I’d say.

Even though I’ve spoken about the Dezi skirt already, it was actually the Clarke tank I started working on first. I had this short piece of Holli Zollinger Enchanted Butterfly fabric and decided to fashion my next Clarke from it. I duly started cutting out and realised to my horror I had somehow miscalculated and had nowhere near enough for a full bias tank. Rats! It’s a very strong, striking print and I was unsure how to proceed, but then remembered I had a long length of Enchanted Sun fabric from the same collection – and this a plan was born.

Surprise! I decided to match the back of the tank with the skirt fabric to give a fun contrast with the front, and I’m happy with the effect. Okay, it’s not exactly earth-shattering, but it made me smile.

Before I got sewing though, I made my adjustments to the pattern. If you recall, I had sized down for my first Clarke tank, but ended up with a front piece that was hugely shorter than the back at the hem. This was a simple thing to fix. I measured how far short I was in centre front (about 3 inches!) and redrew the hemline from the existing side seam to the new centre point, in a gradual curve.

I also solved the problem of why the straps on my Clarke bias dress gave me some issues – and it’s a little embarrassing! I had made a forward shoulder adjustment pretty quickly on my original tank pattern pieces, and realised during this project that I had mixed them up. I had moved a piece from the front to the back strap on one piece, but the opposite on the other! Ooops! You can even see it clear as day in the pattern picture I posted on my last blog post, but I didn’t even notice. Oh dear – haha. The sewing of the straps went a lot more smoothly this time! 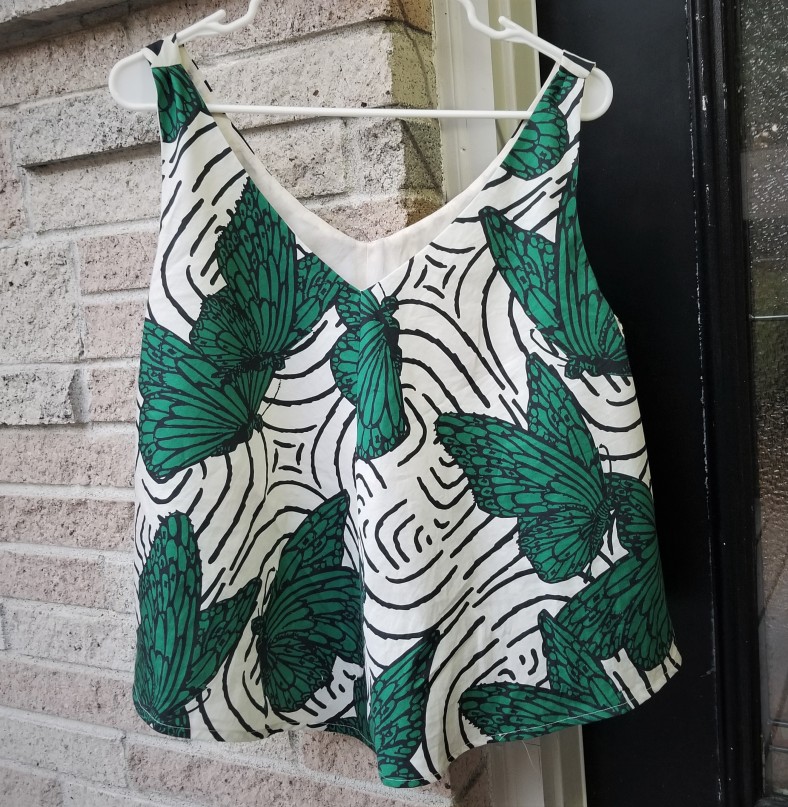 I have to note that one thing I was slightly disappointed with was the swing and drape of the fabric for this project. It’s a lovely cotton sateen and I thought it would be quite silky, but washing it stiffened it up quite a bit. Perhaps I washed it too harshly, although I used a delicate cycle and line-dried it. It doesn’t move quite as I had hoped and the tank, in particular, is more angled and less soft than I anticipated; less so than my last tank actually, which was made from a crepe.

The fabric is still beautiful and I love the two pieces together. I read about a sewist having a similar issue recently, and there were several solutions the hive mind proposed, so I may have a shot at using one or two of those and see if the fabric softens up a bit again. Don’t get me wrong though – it does still have some nice movement – I put a little video over on my Instagram page if you’re interested in seeing the outfit in 3D. 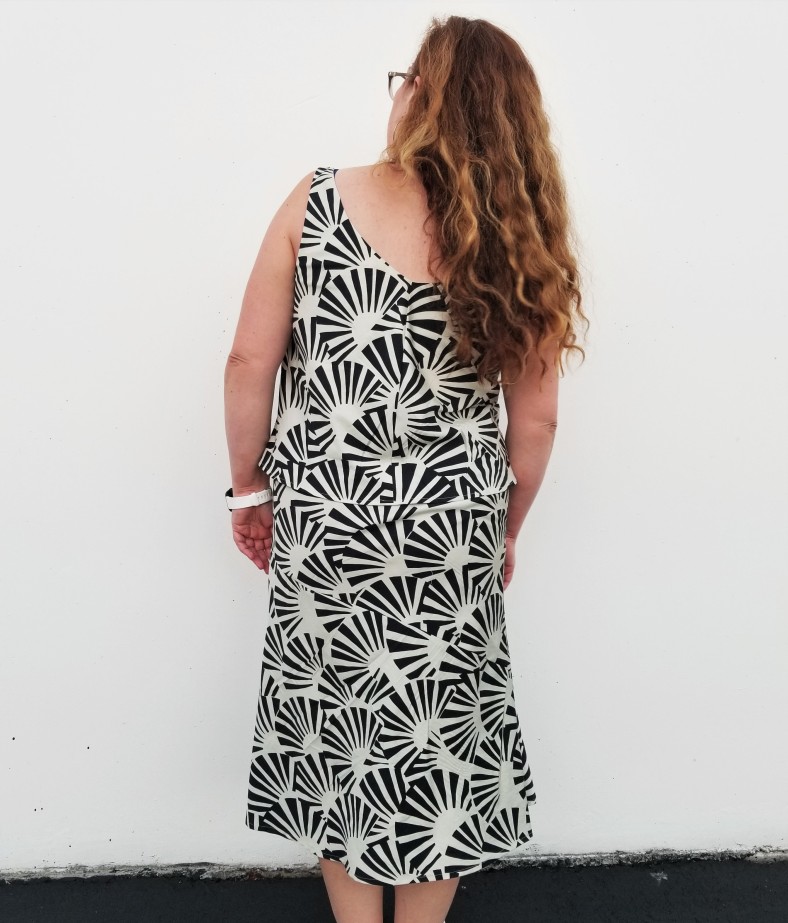 And there we are! I felt like making an outfit in a bold pattern and this fit the bill perfectly. Each piece can obviously be toned down easily but wearing the tank with jeans, or the skirt with a black tee, for example, but I love the combo and look forward to wearing it as is!

7 thoughts on “Working on the bias: Seamwork Dezi skirt and bias Clarke tank”