The third garment of my autumn/winter outerwear project, the Wiksten Haori has got to be the fastest sew I’m going to have. I think the Nani Iro Atelier coat looks like a fairly simple affair as well, but the Haori really surprised me, given that it has a lining. Full credit to the instructions, which were crystal clear, with excellent illustrations. This would be an excellent jacket project for a beginner, with a lovely result to boot! I think the sewing took just 2 hours.

The Wiksten Haori jacket has been around for a couple of years now and is a very popular pattern, but just incase you happen to have missed it, I can tell you it’s a lined, reversible casual jacket, with a Japanese influence. It comes in three different lengths and the most important thing you need to know about this jacket is that it’s oversized. Like, a lot oversized. Which is absolutely fine, as long as you know about it. So now I’ve told you.

I size into the Wiksten Haori XL, but made a Medium at the Medium length, and as you can see, it’s not straining at the seams. I originally traced a Large, but then tried on a Medium sample on a recent trip to Blackbird Fabrics and realised just how roomy it was. To be fair, that one was unlined, so had a little more space, but, still, I came home and retraced the Medium. I’m perfectly happy with it, but I think that I would also quite like to try a Large in the long length, for a bit more of the oversized look. I have a thin wool in my stash that I think would do the job nicely. 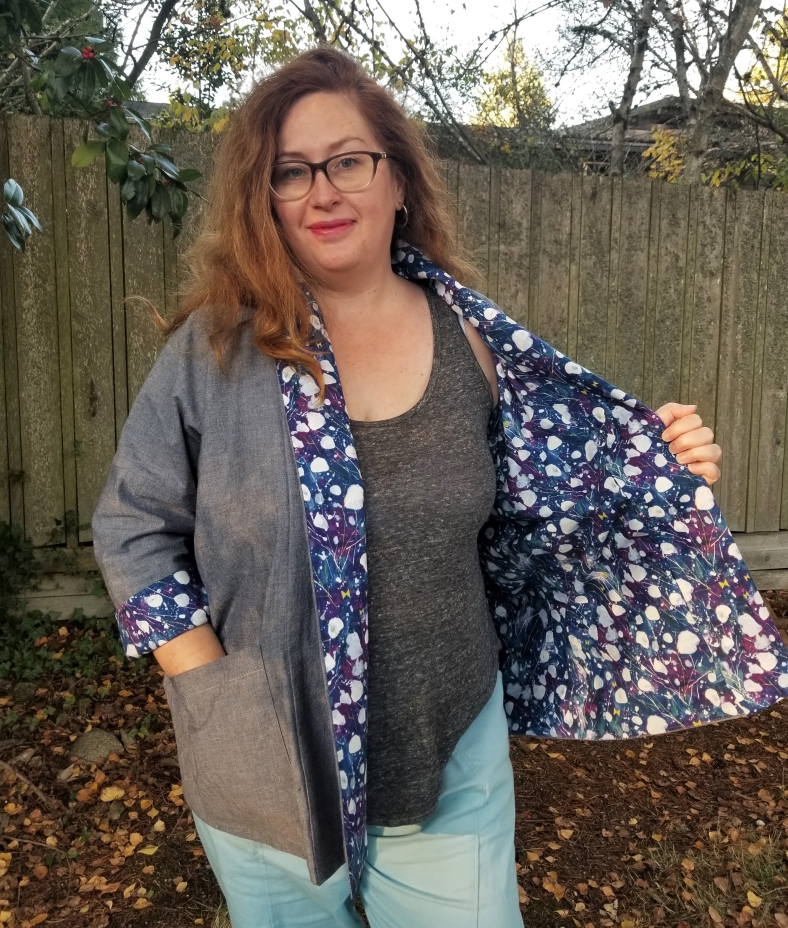 For this one, I wanted to use a blue/grey chambray that I’ve had hanging about for quite some time (although it clearly reads as totally grey in photos). I had 2.5 yards of it and that did the job, although I would have struggled if I’d wanted to use the chambray for both sides of the collar. The lining fabric is actually a quilting cotton that I absolutely love. It’s the violet colourway of Kasumisou (which apparently is a form of Baby’s Breath) from the Snow Flowers collection from Oka Emi at Cotton and Steel. I think the whole collection is stunning and when I realised this pattern would work with a quilting cotton, I immediately wanted to use this fabric.

I actually intended to make the collar the other way round, so that when I folded it over I would get the matching collar, rather than the contrast fabric, but I sewed it on the wrong way. I asked myself if it bothered me, decided it didn’t and carried on. I actually like wearing it both ways, with the collar both up and down, so in the end it worked out. 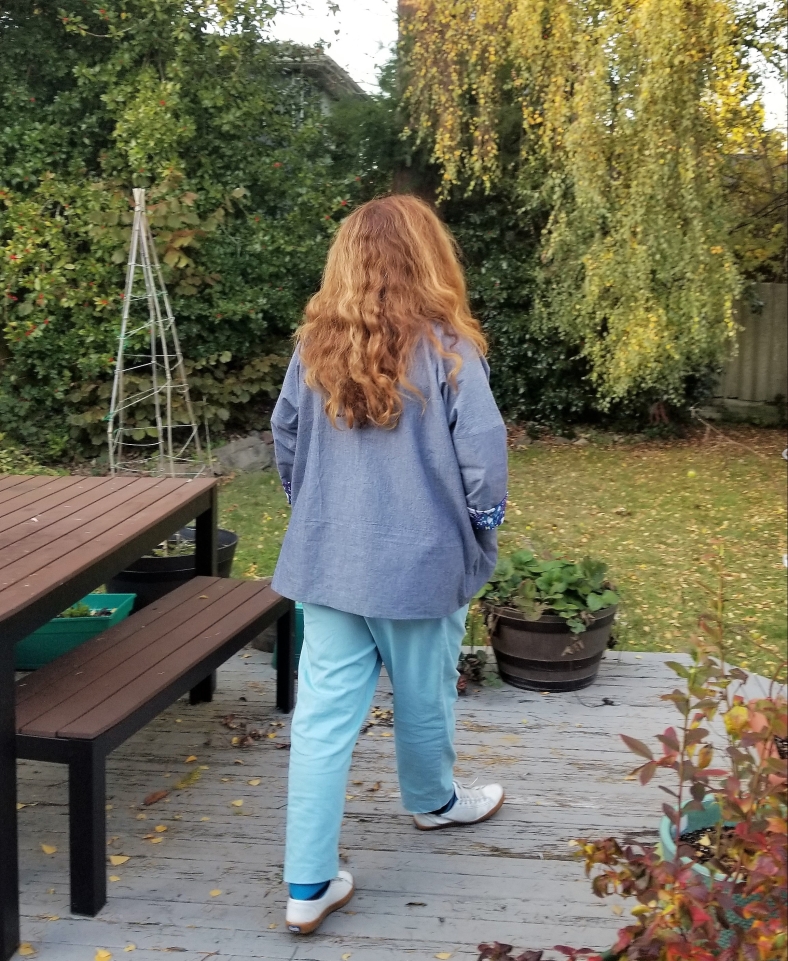 I followed the construction as per the instructions and, as I mentioned at the top, it was very straightforward. It’s mostly a matter of sewing straight seams and then pressing them. The “trickiest” part is probably sewing the sleeves, but it’s explained so well, you don’t even think about it. The only thing I did differently was to handstitch the underside of the collar down, which is basically the very last step. You’re instructed to pin and edgestitch, but I wasn’t convinced it would look very neat (at least, not when I did it), so I opted to finish by hand. It really didn’t take very long and it looks lovely.

I also considered adding pockets to the lining side, so that it was 100% reversible, but something made me opt out in the end. Not sure why, but I would probably do it another time. I’ve also seen lots of nice little adaptions where people have redrafted the pocket to fit into the side seams and hem, which also looks rather nice.

Overall, I don’t have too much to add to the plethora of other excellent posts and pics around on the internet about this garment. Take a look at the #wikstenhaori hashtag on Instagram for some seriously dribble-worthy inspiration and see whether this little number tickles your fancy. Also, try and see one in real life if you’re not convinced, as it’s 110% what turned me from “meh” to “hell yes” in one fell swoop.

I hope you’re having a Happy Halloween and will leave you be to enjoy it after this short, but very sweet entry into my wardrobe. I leave you with this Vogue-worthy pose which made my husband snort out loud.

I just published another blog post detailing the latest scrap-busting projects I undertook. I made an apron for my bro for Xmas, some really cute trays for my #secretsantasockswap partner using a free (and lovely) pattern from @noodlehead - and some napkins. Yes, I know - napkins. But seriously, they are so useful and quick, plus I used the easiest method ever to get neat mitred corners. SO fast. Anyway, if you're interested, it's all on the blog with more details now (link in profile). :) 🌍🌎🌏
First piece nearly done for the #thegreatmodulesewalong. I'm not going to lie - the exposed zipper and cuff snap of my #robinsontrousers made me say some sweary things today. But the waistband is beautifully finished with bias binding, which is a first for me, and cheered me up no end!
The husband is sewing with me! He expressed a slight interest in learning how to make a bag (to my utter astonishment), so we are both working on the #summitpack for #sewmystyle2020. Will we make it through unscathed? Your guess is as good as mine. So far, so good though!
I was reminded today that I never posted the results of my attempt to do a dartless FBA on the Ogden last summer (thanks @karenderosie). Whoops! I guess it was partly because I'm forgetful, but also because I was testing another garment which seemed like a good comparison for a post, but it got postponed. I snapped a couple of pics today and also v. quickly of my original Ogden (unironed linen, so it would be a little looser after ironing), but I think they serve the purpose. Pics 1 - 2: don't look too bad from a distance and the front, but Pic 3 is where you can see the issue. I ended up with a LOT of excess width at the bottom front, which is not good on my body. I used a mix of tutorials in the end, and they all included rotating out the waist dart excess at the end, so this is after that reduction! Pics 4 and 5 show it's pulling from the front. I need a little swayback adjustment sometimes, but actually it's pulling higher up. You can't quite see my side seam, but it is obvious it's the top half. The top is also too short now, even if a little extra length was added during the process. I suspect the apex is way off, so my boobs aren't filling the space correctly. I made the 14, which was my HB measurement, but think I should have begun with my HB + 2 in this instance (referring to recent discussion on this topic here), although presumably that would give me even more excess at the front? Note: using HB does work well with some garments. The last few pics are my original Ogden and you can see it actually doesn't have the huge excess issue at the front. However it really is too big at the armhole and shoulders. You can't tell here, but I get quite a bit of gapeage. Nevertheless, the "shape" is better. The conclusion is that the new top actually looks nice tucked into something high-waisted, but I won't be wearing it on the outside. I could do some more experimenting, but... honestly I tested another top which already fits me better. Also... perhaps I just need a darted top? Perhaps the Ogden just isn't the best draft for a closer fit on my shape? Not sure, because I know people with similar measurements have had success with this... the jury is still out.
I got to test out the new sizing range for Nina Lee's #mayfairdress and it's such a clever design of a dress. The new range (out very soon) will go up to a size 28 and I tested the 16. My measurements were actually in the 18 range, but I wanted the shoulder and back fit to be spot on and they are with the 16. There's a bit of positive ease in this knit dress, so I went with the straight 16 and it's very comfy! The dress has this great grown-on collar, which results in a gorgeous pleat detail from the back neck down through the front, and this is mirrored by gathers at the waist. Gorgeous! The fabric is the nicest rayon knit I've used and is from @lillestoff. It's the "Switch" modal if you're interested :) I've written up more thoughts and detailed my few small adjustments on the blog (link in profile), but I've been meaning to try Nina's patterns for a while and I'm glad I have! I'm definitely going to check out her others now. @ninaleelondon #lillestoff
I nailed down my patterns for #thegreatmodulesewalong and already started on two of them. Woo! I put more details in my Stories and on the blog for posterity. 😁
%d bloggers like this: